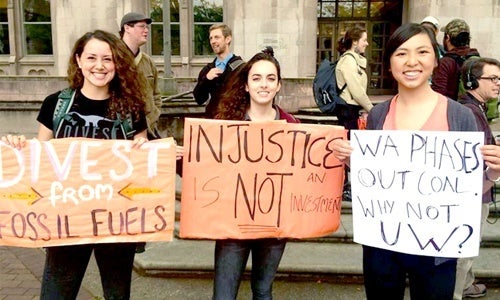 Morgan Sinclaire is a third-year math major at the University of Washington involved in Divest UW for the past two years.

This quote by Bill McKibben has become the mantra of the fossil fuel divestment movement, the campaign which has sprouted up on hundreds of college campuses across the country with one simple goal: to get universities to stop investing in the same fossil fuel industry that is accelerating us all towards planetary catastrophe. 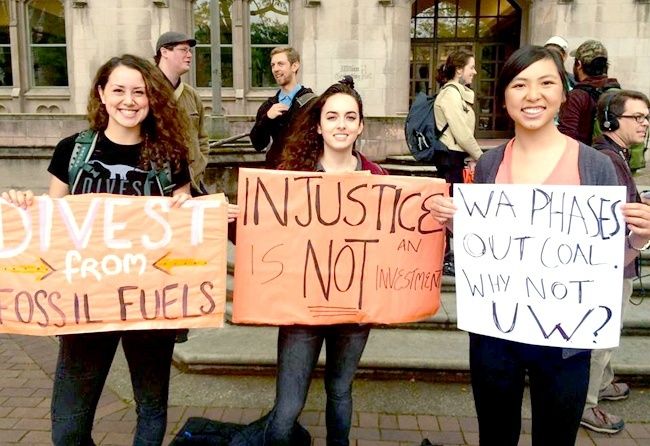 Victory! University of Washington is now a coal free institution! Final vote went through with all yeses! What a win after months of working. Thank you to all our supporters, we could never have done it without you. Fossil free is the way to be. Photo credit: Divest UW

Here at the University of Washington in Seattle, Divest UW has gotten one of the biggest victories of the movement so far, with the Board of Regents voting to divest from coal today.

Founded in 2012, back when the fossil fuel divestment movement was just starting to spring up on college campuses, Divest UW has been pushing for this for a long time. We have shown that students here would like to see their school get its money out of dirty energy, with our divestment resolutions passing overwhelmingly in both the undergraduate and graduate student senates, but not until this week was our administration moved.

And that is why today’s victory is all the more significant: it validates all the work our group has put into this over the past three years, and we are proud to see our university recognize the growing power of the student movement to tackle climate change. With its $2.8 billion endowment, the UW is largest public university to divest from this destructive industry.

Divest UW is still concerned with our university’s investments in oil and gas companies, which have also shown an utter disregard for our environment. Here in Seattle, this hits home with Shell’s plans to dock at our Port for the purpose of going to the ends of the Earth to drill for oil.

Climate change is already here, and we cannot turn a blind eye to rising seas, severe droughts, devastating storms and dire food insecurity. All of us, as individuals, institutions and governments, have a choice to make—between letting this crisis worsen catastrophically or taking action to right this wrong. By severing our ties to the coal industry—the worst climate offender out there—the University of Washington has taken a strong, positive stand for a better future.