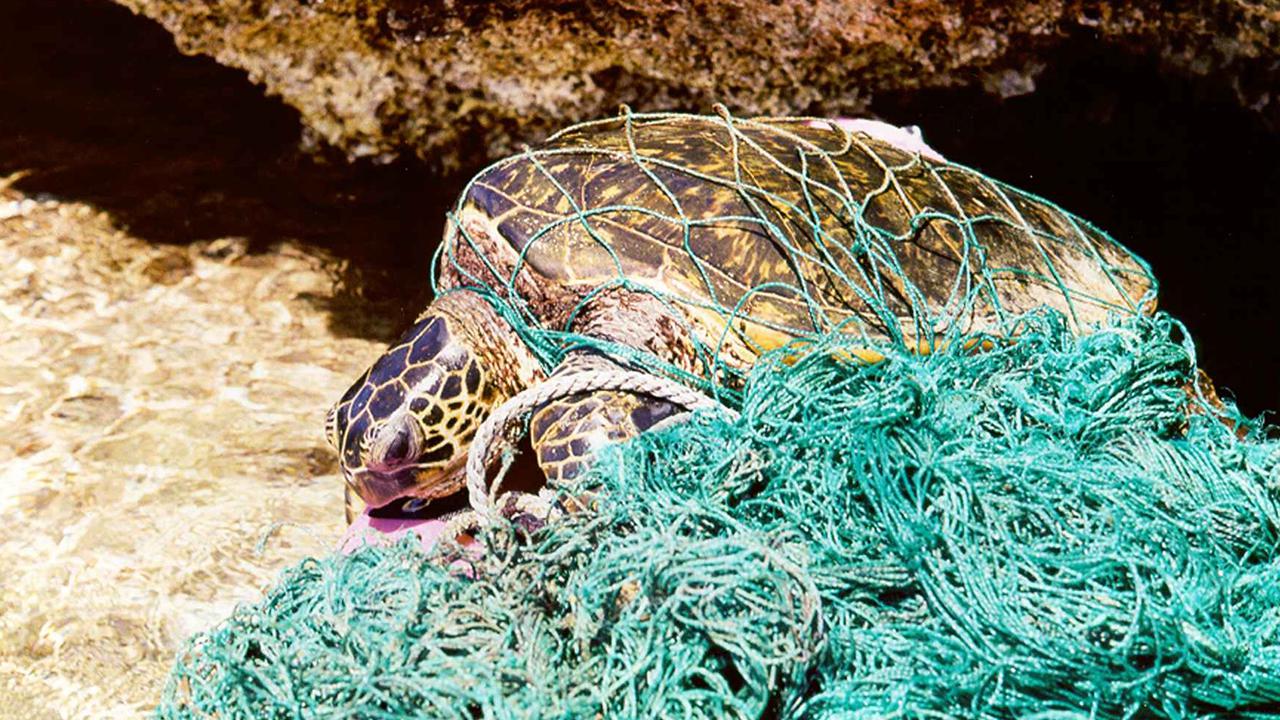 The hidden cost of fishing: Marine debris can entangle and even kill marine wildlife. For air-breathing animals like this sea turtle, discarded fishing gear, known as "ghost gear," is a constant threat that can entangle them and cause them to drown. NOAA PIFSC

There is one main U.S. law that governs the management of marine fisheries in federal waters: The Magnuson–Stevens Fishery Conservation and Management Act (MSA). Originally intended to address the concern over foreign fisheries operating near U.S. waters, the MSA, which was passed in 1976, extended the nation’s exclusive fisheries zone from 12 to 200 nautical miles from the coastline. The law was amended in 1996 and 2007 to prevent overfishing, rebuild overfished stocks, establish annual catch limits, put accountability measures in place, strengthen the use of science through peer review, and ensure the overall sustainability of the fishing industry.

Since it was passed, and through past bipartisan reauthorizations, the MSA has notched up many successes, including the rebuilding of at least 40 fisheries stocks — some of which were on the verge of collapse — in the last two decades. “Under the MSA, we are ending overfishing and rebuilding stocks, which strengthens the value of fisheries to our economy and marine ecosystems,” according to the National Marine Fisheries Service, the office of the National Oceanic and Atmospheric Administration (NOAA) within the Department of Commerce that is responsible for the stewardship of U.S. ocean resources and their marine habitats.

But a new report has found that the nation’s fishery managers are failing in their duty to protect designated “essential fish habitat” (EFH) as required by the MSA. Released in April by the Natural Resources Defense Council (NRDC), a nonprofit environmental advocacy group headquartered in New York, the report is based on a detailed review of how each of the eight federal regional management councils has administered the MSA’s requirement to minimize the negative impact of fishing on EFH.

“We found that councils have generally not used the law’s habitat protection requirements to significantly reduce commercial fishing’s ongoing adverse effects on fish habitat and marine ecosystems,” write the report’s principal authors, Brad Sewell, the senior director in the Oceans Division of NRDC’s Nature Program, and Molly Masterton, a staff attorney in the Oceans Division of NRDC’s Nature Program. They point out that these ocean ecosystems provide habitat for up to “80 percent of life on Earth,” including fisheries that “feed and provide jobs to millions of people.”

But destructive fishing practices destroy marine habitats, kill countless unintended species in their massive, indiscriminate hauls (“bycatch”), and pull so many individual animals from the seas that nature cannot replenish their numbers fast enough (“overfishing”). Global bycatch may amount to as much as 40 percent of the world’s catch, and includes a myriad of species — many of them endangered — that fishing fleets are accidentally catching and inadvertently killing. Fishing nets kill hundreds of thousands of whales, dolphins, sea turtles and water birds every year.

“In some cases, councils have simply protected very little habitat, including particularly important or vulnerable habitat, from bottom trawls, the fishing gear most widely recognized as causing harm,” write Sewell and Masterton. “In other cases, councils have primarily closed very large, generally deep-sea, areas to potential future bottom trawling, protection that provides important but limited benefits. We also found that the councils have protected virtually no habitat from all commercial fishing gear or all fishing impacts using the EFH requirement, the strongest level of EFH protection.”

Unsustainable and destructive commercial fishing is just one of the many threats that the world’s oceans and their inhabitants must face. A range of human activities — and the byproducts of those activities—are an ever-present and increasing danger to marine species and ecosystems, including oil and gas drilling and exploration, coastal development, the wildlife trade, ship noise, tourism, plastic pollution, global warming, loss of sea ice and ocean acidification.

The Monterey Bay Aquarium offers a free “Seafood Watch” guide to help consumers make more responsible seafood decisions. But an even better idea is to simply leave seafood off of our plates. “A shrimp cocktail is not worth the life of a sea turtle,” said Jaclyn Lopez, Florida director of the Center for Biological Diversity, a nonprofit based in Tucson, Arizona, that supports the implementation of lifesaving “turtle excluder devices” in shrimp trawl fisheries in the Gulf of Mexico and South Atlantic. “We have to do more to protect these extraordinary creatures before it’s too late. Devices to exclude sea turtles from shrimp nets just make sense.”

As these threats continue, Oceana, a nonprofit ocean conservation organization based in Washington, D.C., has sounded an alarm bell to call attention to ongoing challenges to the MSA. “Unfortunately, there have been attempts [to] weaken the very law that has improved fisheries in the U.S. A number of bills have been introduced that would extend deadlines for rebuilding stocks, relax [annual catch limits], loosen [accountability measures], and hinder the ability of the scientific advisors to provide sound scientific recommendations,” the group wrote in 2018. “These changes, if implemented, would undermine significant progress in fisheries management over the last 42 years. … Since 2009, Congressional attacks on the MSA have steadily increased, with a chorus of opponents calling for changes.”

In 2018, for example, the House of Representatives passed the Modern Fish Act (H.R. 2023), to include the priorities of recreational fishers in the MSA’s reauthorization, a move that marine conservationists opposed. “H.R. 2023 would undo many of the conservation gains made over the past 10+ years in ending overfishing and rebuilding depleted stocks by removing or loosening the requirement of setting scientifically-based catch limits,” argued the Marine Fish Conservation Network, a nonprofit group based in Arlington, Virginia, dedicated to sustaining fish populations. “The Modern Fish Act inserts too much uncertainty into the fisheries management process by adversely changing catch limits and how they are applied, muddies the waters between state and federal management, and allows political and economic considerations to override science in management decisions.”

In December, Rep. Jared Huffman (D-CA), chairman of the House Natural Resources Subcommittee on Water, Oceans, and Wildlife, and fellow subcommittee member Rep. Ed Case (D-HI) released the draft bill to reauthorize and update the MSA. In addition to addressing the current needs of sustainable fisheries and coastal communities that depend on healthy marine environments, the bill also tackles a threat multiplier for oceanic ecosystems and something that the Biden administration has made a main priority: climate change.

“This draft includes important and timely updates to the MSA as well as provisions to strengthen communities and support those whose lives and livelihoods depend on healthy oceans and fisheries,” said Reps. Huffman and Case. “With the growing impacts of climate change, difficulties due to the ongoing pandemic, and rapidly evolving needs in fisheries management and science, amending and reauthorizing the MSA remains a top priority. We’re looking forward to the next phase of this process and receiving constructive commentary to inform and shape the bill’s introduction [in 2021].”

Oceana has launched a public petition urging Americans to tell Congress to support the MSA, in which they warn, “Our oceans are under attack. Past attempts by members of Congress to weaken the [MSA] … have threatened to undermine years of successful work to rebuild and protect the health of America’s fisheries. … Rollbacks that take aim at cornerstone conservation safeguards and statutes such as the MSA put our oceans at risk.”

Putting the oceans at risk is illogical, unethical and ultimately self-defeating. Marine biologist Sylvia Earle, who in 1990 became NOAA’s first female chief scientist, finds a direct connection between the health of the Earth’s marine ecosystems and humanity’s survival: “We need to respect the oceans and take care of them as if our lives depended on it. Because they do.”

Reynard Loki is a writing fellow at the Independent Media Institute, where he serves as the editor and chief correspondent for Earth | Food | Life. He previously served as the environment, food and animal rights editor at AlterNet and as a reporter for Justmeans/3BL Media covering sustainability and corporate social responsibility. He was named one of FilterBuy’s Top 50 Health & Environmental Journalists to Follow in 2016. His work has been published by Yes! Magazine, Salon, Truthout, BillMoyers.com, AlterNet, Counterpunch, EcoWatch and Truthdig, among others.