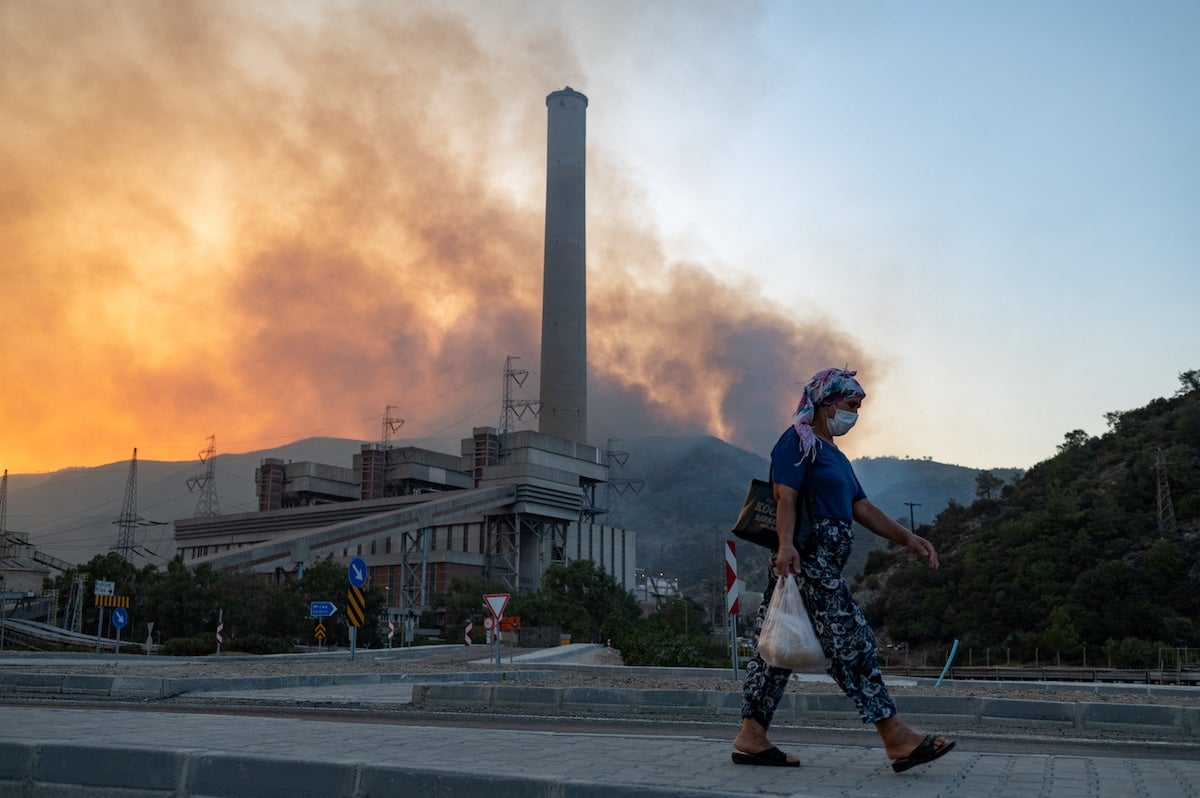 A wildfire near the Kemerköy coal-fired power plant in Turkey on Aug. 4, 2021. YASIN AKGUL / AFP via Getty Images

The UN’s World Meteorological Organization released its annual State of the Climate report on Wednesday, and the result is a grim account of the progression of the climate crisis.

“Today’s State of the Climate report is a dismal litany of humanity’s failure to tackle climate disruption. Fossil fuels are a dead end – environmentally and economically,” UN Secretary-General António Guterres said in response to the report, as The Guardian reported.

Ocean Acidification: The ocean absorbs approximately 23 percent of carbon dioxide released into the atmosphere, and this acidifies the ocean, lowering its pH and harming marine life. The ocean’s pH is now likely at its lowest in 26,000 years.

Ocean Heat: The ocean also absorbs around 90 percent of the heat trapped in the atmosphere because of greenhouse gas emissions, according to the report. The heat content of the upper 2,000 meters (approximately 6,562 feet) of the ocean reached a record high in 2021.

Sea Level Rise: Mean sea level rise reached its highest level yet in 2021. It has risen by an average of 4.5 millimeters per year between 2013 and 2021, more than double the rate between 1993 and 2002. This increased rate is mostly because of melting from ice sheets.

The report also saw evidence of climate change in other key indicators. The past seven years were the seven hottest on record. 2021 was cooler than it might have been otherwise because it began and ended with a La Niña event, but this typically cooling weather pattern didn’t reverse the overall warming trend. The average global temperature in 2021 was 1.11 degrees Celsius above pre-industrial levels.

“It is just a matter of time before we see another warmest year on record,” WMO Secretary-General Prof. Petteri Taalas said in the press release. “Our climate is changing before our eyes.”

The report also focused on extreme weather events, which the press release called the “day-to-day ‘face’ of climate change.” A heat wave in British Columbia, Canada saw temperatures spike to 49.6 degrees Celsius and killed more than 500 people, and heat waves also broke or equaled records in California and the Mediterranean. Devastating flooding cost $17.7 billion in China’s Henan province and more than $20 billion in Germany.

Guterres took the opportunity to call for investments in renewable energy.

“The only sustainable future is a renewable one,” he said, as The Guardian reported. “The good news is that the lifeline is right in front of us. Wind and solar are readily available and, in most cases, cheaper than coal and other fossil fuels. If we act together, the renewable energy transformation can be the peace project of the 21st century.”

However, UN officials also criticized governments for failing to act on the climate crisis. They observed that the emergency had been displaced in the news by issues like the coronavirus pandemic and Russia’s invasion of Ukraine, as Reuters reported.

“We are… seeing many choices being made by many major economies which, quite frankly, have the potential to lock in a high-carbon, high-polluting future and will place our climate goals at risk,” Guterres’s special adviser on climate action Selwin Hart told reporters, according to Reuters.