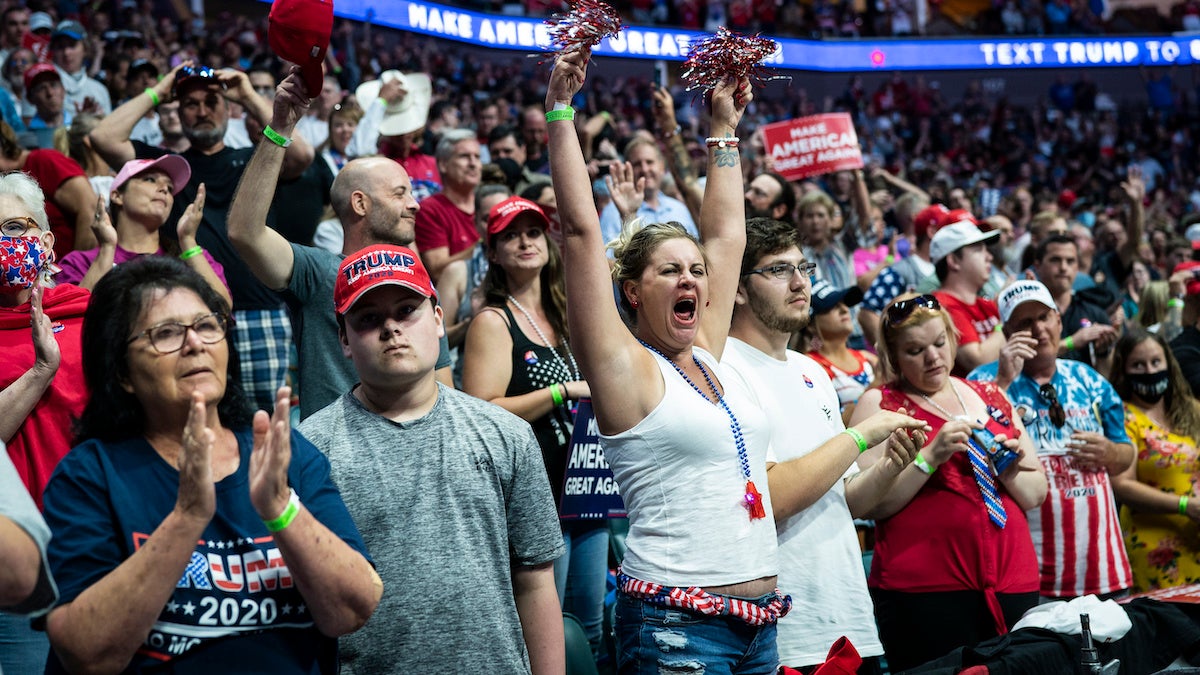 Supporters cheer before Trump arrives for a rally at the BOK Center on June 20, 2020 in Tulsa, OK. Jabin Botsford / The Washington Post via Getty Images

On Monday and Tuesday of the week that President Donald Trump held his first rally since March in Tulsa, Oklahoma, the county reported 76 and 96 new coronavirus cases respectively, according to POLITICO. This week, the county broke its new case record Monday with 261 cases and reported a further 206 cases on Tuesday. Now, Tulsa’s top public health official thinks the rally and counterprotest “likely contributed” to the surge.

“The past two days we’ve had almost 500 cases, and we know we had several large events a little over two weeks ago, which is about right,” Tulsa Health Department Dr. Bruce Dart said in a press conference Wednesday, as The New York Times reported. “So I guess we just connect the dots.”

Trump held his rally June 20, and it can take about two weeks for an increased infection rate to show up in new case tallies because of the disease’s incubation period.

Trump’s rally made headlines in mid-June when it was revealed that, in order to attend, rally goers had to agree not to sue the campaign if they contracted COVID-19. Dart had urged the campaign to cancel the rally before it took place.

“It’s the perfect storm of potential over-the-top disease transmission,” Dart said, as The New York Times reported at the time. “It’s a perfect storm that we can’t afford to have.”

Administration and campaign officials pushed back on the idea that the rally had led to a surge in cases. White House Press Secretary Kayleigh McEnany said she had “no data to indicate” this was the case, as ABC News reported.

“There were literally no health precautions to speak of as thousands looted, rioted, and protested in the streets and the media reported that it did not lead to a rise in coronavirus cases. Meanwhile, the President’s rally was 18 days ago, all attendees had their temperature checked, everyone was provided a mask, and there was plenty of hand sanitizer available for all. It’s obvious that the media’s concern about large gatherings begins and ends with Trump rallies,” he said in a widely reported statement.

While the campaign did conduct temperature checks and distribute masks and hand sanitizer, it did not enforce social distancing inside the arena and most participants did not wear masks, ABC News pointed out.

The rally was much smaller than anticipated, however. Around 6,200 people from across the country attended, but the venue, the BOK Center arena, can seat 19,000, POLITICO reported.

Tulsa county contract tracers could not confirm whether they had linked any specific cases to the rally because the Tulsa Health Department “will not publicly identify any individual or facility at risk of exposure, or where transmission occurred,” spokesperson Leanne Stephens said, according to The New York Times.

One sign that does point to the rally as an infection source is the fact that cases have increased in rural parts of Oklahoma, Tulsa county commissioner Karen Keith told The New York Times.

Some high-profile people have tested positive for COVID-19 after attending the rally, ABC reported, including former 2012 presidential candidate Herman Cain and national chair of the Trump Victory Finance Committee Kimberly Guilfoyle. At least eight Trump campaign staffers in Tulsa have also tested positive, and two of them attended the event.

Tulsa is not the only part of Oklahoma seeing a surge in cases. The entire state reported 858 new cases Tuesday and 673 Wednesday.

“We continue to go up and are at a new peak,” lead COVID-19 officer at the University of Oklahoma Dr. Dale Bratzler told ABC News Monday.

The next Trump rally is scheduled to take place in Portsmouth, New Hampshire Saturday. Once again, attendees will have to promise not to sue if they fall ill. They will have their temperatures checked and be offered masks and hand sanitizer, but mask wearing and social distancing will not be required.