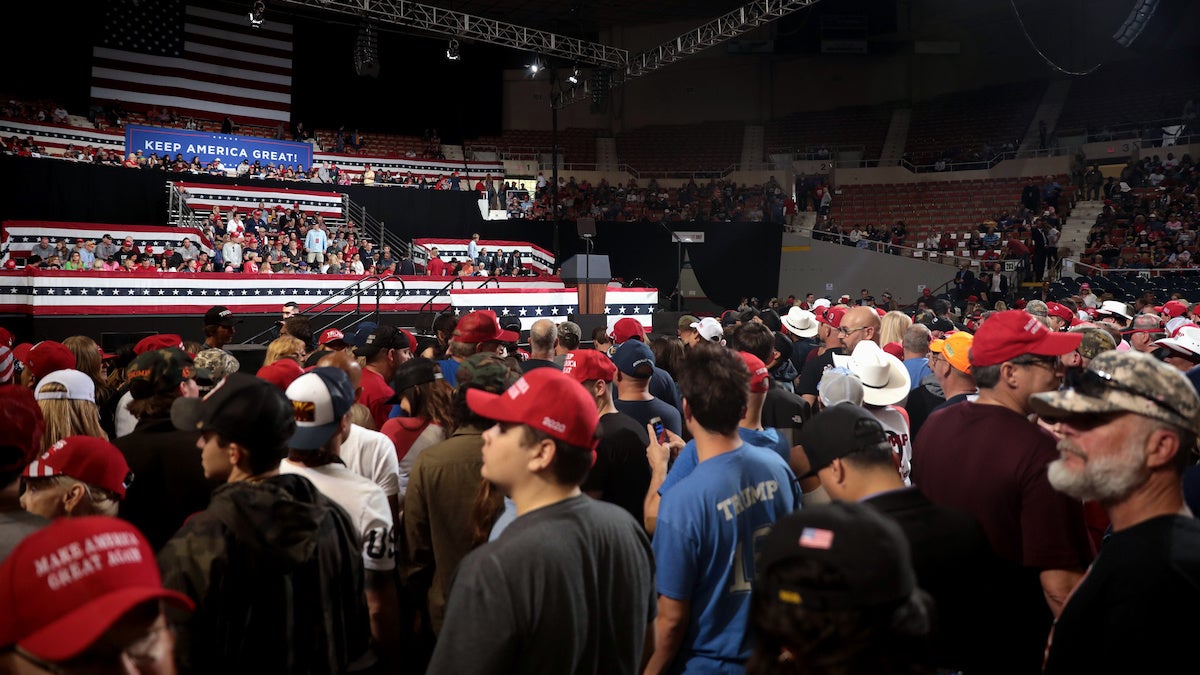 Anyone who attends a Trump rally in the midst of the coronavirus pandemic does so at their own risk.

President Donald Trump is hosting his first rally since March at the BOK Center in Tulsa, Oklahoma next week, CBS News reported. The venue seats more than 19,000 people, a clear violation of the Centers for Disease Control and Prevention’s (CDC) social distancing guidelines. And the campaign wants to make sure it is not liable if any attendees fall ill.

“By clicking register below, you are acknowledging that an inherent risk of exposure to COVID-19 exists in any public place where people are present,” the fine print at the bottom of the registration page reads. “By attending the Rally, you and any guests voluntarily assume all risks related to exposure to COVID-19 and agree not to hold Donald J. Trump for President, Inc.; BOK Center; ASM Global; or any of their affiliates, directors, officers, employees, agents, contractors, or volunteers liable for any illness or injury.”

Trump's campaign is asking supporters seeking tickets for his Oklahoma rally next week to waive liability if they contract Covid-19.

Read the form for the #MAGA rally here: pic.twitter.com/OrqQJRanZj

The registration information for the June 19 rally was first sent out Thursday, POLITICO reported. The webpage makes no mention of any safety precautions being taken to encourage social distancing at the event, or of the fact that CDC recommends that people wear masks in indoor areas where social distancing is difficult.

Trump has said he wants his rallies full and has been disdainful of face masks, CBS pointed out.

Oklahoma began the process of reopening April 24 and moved on to Phase 3 June 1, which means summer camps could reopen and workplaces could be fully staffed, The New York Times reported. Its case numbers have stayed flat. As of Thursday, it had confirmed 7,626 cases and 357 deaths, its health department said.

“My office is working to confirm details about the venue and visit,” Tulsa Mayor G.T. Bynum told CBS News in a statement. “Tulsans have managed one of the first successful re-openings in the nation, so we can only guess that may be the reason President Trump selected Tulsa as a rally site. The City of Tulsa continues to follow the State of Oklahoma’s OURS plan on COVID-19 response as it relates to events, which encourages the organizer to have enhanced hygiene considerations for attendees.”

However, CBS News medical contributor Dr. David Agus said the CDC did not have any guidelines for gatherings of more than 10,000 people.

“I don’t know of any state guidelines that would enable that,” he said.

While cases in Oklahoma have not spiked, they have in Florida, Arizona and North Carolina, where Trump also announced this week he would hold rallies, The New York Times pointed out.

“[W]e will ensure that everyone who goes is safe,” White House press secretary Kayleigh McEnany said of the rallies Wednesday, NPR reported. But she did not elaborate how that would happen.

The timing of Trump’s next rally is controversial for another reason. It is set to take place on Juneteenth, a holiday celebrating the date news of the abolition of slavery reached Texas. Tulsa is also the site of a 1921 massacre of Black Americans by a white mob, and the rally comes amidst ongoing national protests over racist murders of African Americans by cops and vigilantes.

“Tulsa was the site of the worst racist violence in American history. The president’s speech there on Juneteenth is a message to every Black American: more of the same,” Democratic Rep. Val Demings of Florida tweeted.

Tulsa was the site of the worst racist violence in American history. The president’s speech there on Juneteenth is a message to every Black American: more of the same.

While some public health experts have also raised concerns about the spread of COVID-19 at the protests, outdoor gatherings are thought safer than indoor ones, The New York Times pointed out.