Protestors Urged to Wear Masks, Wash Hands and Get Tested for COVID-19 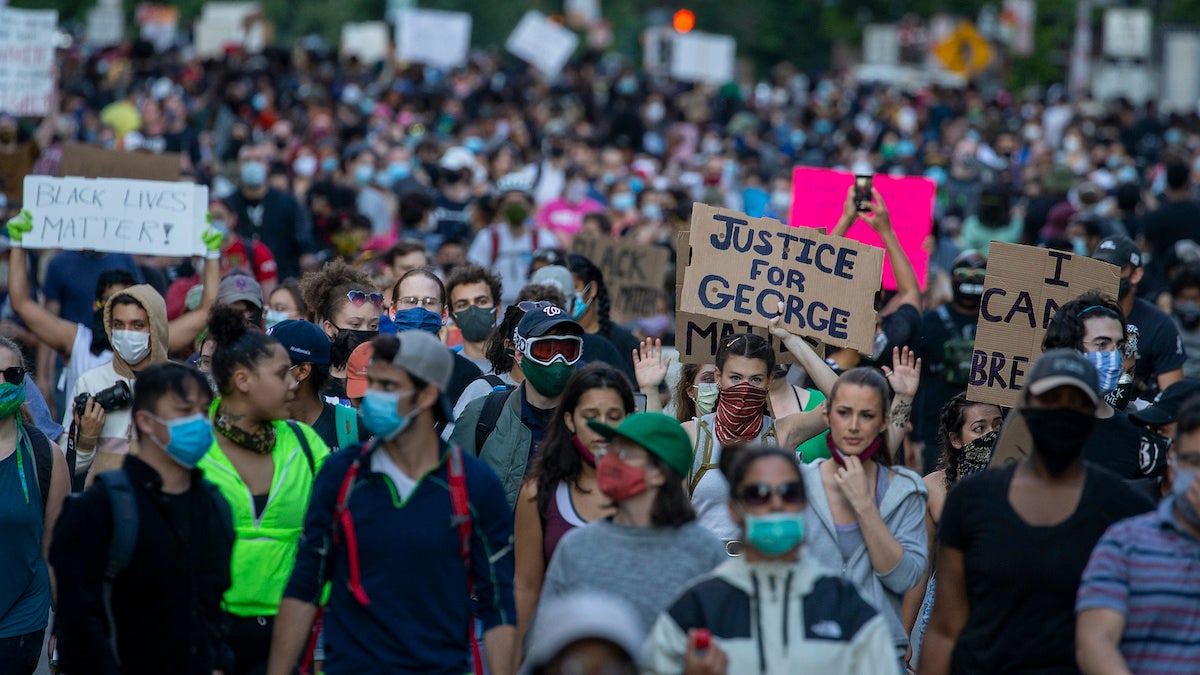 A crowd of protestors on May 31, 2020 in Washington, DC. Tasos Katopodis / Getty Images

The nationwide horror at the killing of George Floyd by the Minneapolis police has triggered protests in 75 cities. People are demonstrating against the systemic racism that has made people of color targets of lethal actions by law enforcement. In response, elected officials and public health experts are walking a fine line of affirming the rights of protestors while simultaneously worrying that the protests will lead to a new wave of coronavirus infections.

It is worth noting that unlike the protests against stay-at-home orders and mask wearing, many of the demonstrators against racial injustice were wearing masks and gloves.

“All things considered, there’s little doubt that these protests will translate into increased risk of transmission for COVID-19,” said Maimuna Majumder, a computational epidemiologist at Boston Children’s Hospital and Harvard Medical School, to The Atlantic. However, she added the protests are important and necessary.

“Structural racism has been a public-health crisis for much longer than the pandemic has,” she said.

The protests over the injustice of police officers disproportionately killing people of color have coincided with how COVID-19 deaths disproportionately hit racial minority communities. That phenomenon exposed huge disparities in resources and access to care in a country without universal healthcare.

As The Atlantic noted, the pandemic and unrest together have trapped the country in a bind. The demonstrations oppose police brutality. But peaceful, masked protesters — and the journalists covering them — have sometimes been met with an overly aggressive police response. Yet, the demonstrations and the aggressive response by police are likely to exacerbate the spread of the coronavirus.

The scenes of protestors holding hands, or shouting in the face of police, or singing in close quarters has raised concern that the protests will act as super spreaders.

“If you were out protesting last night, you probably need to go get a COVID test this week,” said Atlanta Mayor Keisha Lance Bottoms at a news briefing Sunday, as NBC News reported. “[B]ecause there’s still a pandemic in America that’s killing black and brown people at higher numbers.”

The Atlantic noted the aspects of the protests and the police response that may contribute to a spread of the coronavirus. “The virus seems to spread the most when people yell (such as to chant a slogan), sneeze (to expel pepper spray), or cough (after inhaling tear gas). It is transmitted most efficiently in crowds and large gatherings, and research has found that just a few contagious people can infect hundreds of susceptible people around them. The virus can spread especially easily in small, cramped places, such as police vans and jails.”

Public health experts have urged demonstrators to take precautions so they mitigate the spread of the coronavirus.

“Crowded protests, like any large gathering of people in a close space, can help facilitate the spread of covid-19, which is why it’s so important participants wear masks, eye protection and bring hand-gel,” Saskia Popescu, an infectious-disease epidemiologist at George Mason University’s Schar School of Policy and Government, wrote in an email to The Washington Post. “Shouting and screaming, as some studies have shown with singing, can project droplets farther, which makes the use of masks … and eye protection … that much more important.”

While masks will reduce the spread of airborne droplets, their effectiveness is limited, unless they are N95 masks, according to The Washington Post. However, N95 masks are in short supply and should be reserved for frontline clinicians.

“The question is: how do we do protesting safely?” Dr. Ashish Jha, the director of the global health institute at Harvard’s TH Chan School of Public Health, told CNN, as The Guardian reported. “I think masks are a critical part of it.”

Some public health experts take solace that the protests are outdoors where droplets containing the virus are diluted in the air. Also, studies have shown that the virus is seldom transmitted in open-air situations.

“Yes, the protests are outside, but they are all really close to each other, and in those cases, being outside doesn’t protect you nearly as much,” said Howard Markel, a medical historian who studies pandemics, as The New York Times reported. “Public gatherings are public gatherings — it doesn’t matter what you’re protesting or cheering. That’s one reason we’re not having large baseball games and may not have college football this fall.”

Furthermore, he noted, that many of the protestors are young and he worries that they will be asymptomatic, but bring home the virus to elderly relatives. Also, aggressive police tactics for crowd control, like using tear gas and pepper spray, increase respiratory secretions from the eyes, nose and mouth. Police also corral crowds, penning people together in small spaces.

Dr. Theodore Long, who is leading New York City’s contact tracing efforts, echoed the mayor of Atlanta, urging anyone who had been involved in the protests to get tested for the virus and to protect themselves.

“We strongly encourage anybody who is out in the protests to wear a mask, practice proper hand hygiene and to the extent possible, socially distance, though we know that’s not always going to be feasible,” Dr. Long said, as The New York Times reported.