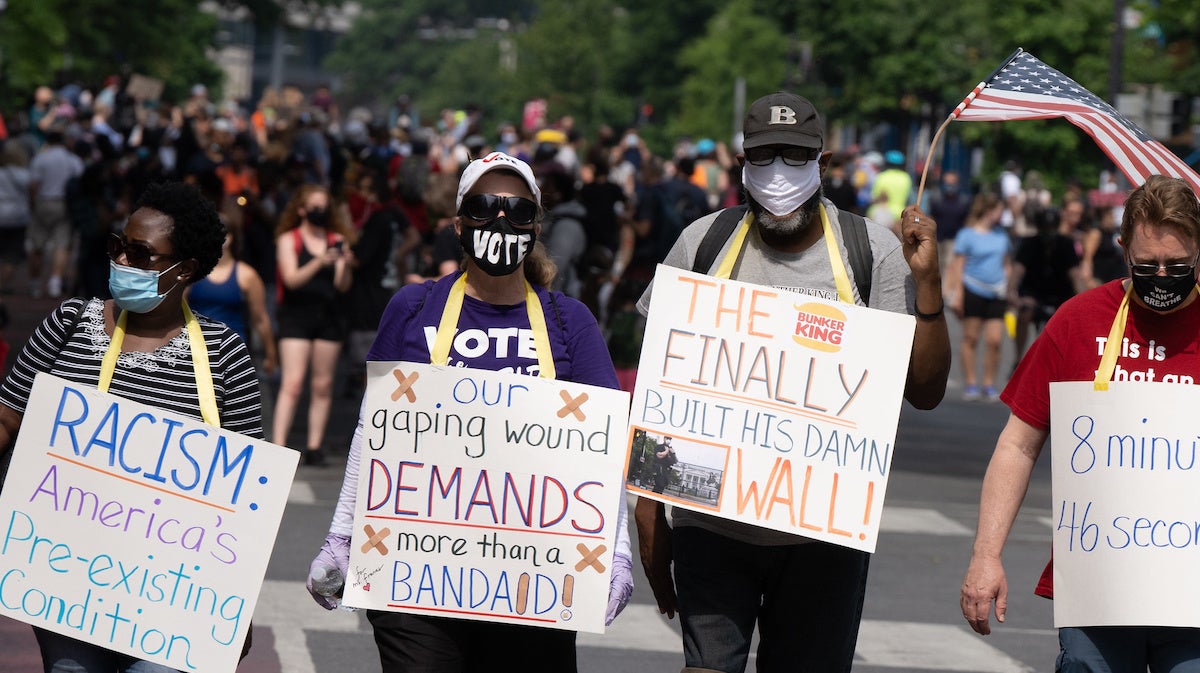 People protest against the killing of George Floyd, in Washington, DC on June 6, 2020. Victoria Pickering / Flickr

Initial data suggests that widespread anti-racism protests in the U.S. have not led to a surge in coronavirus cases.

When the protests first broke out in response to the police murder of George Floyd in late May, public health experts recognized the justice of their cause while expressing concerns about the spread of the disease in large gatherings, especially since police tactics like spraying pepper spray and tear gas can force people to cough and sneeze. They advised protesters to wear masks and eye protection. If their fears turn out not to have materialized, it may be because protesters heeded their advice.

“We did have a rally in Bellingham, which is our county seat, and there was also a protest, and we have not been able to connect a single case to that rally or to the protest, and what we’re finding is in large part that’s due to the use of masks,” Erika Lautenbach, the director of the Whatcom County Health Department in Washington State, told NPR’s All Things Considered. “Almost everyone at the rally was wearing a mask, and it’s really a testament to how effective masks are in preventing the spread of this disease.”

Washington is one state where contact tracing has indicated that protests are not driving coronavirus clusters. Instead, Lautenbach said clusters were primarily traced to social gatherings like parties where people weren’t wearing masks and, secondarily, to workplaces.

In New York City, meanwhile, cases, hospitalizations and deaths have continued to decline through June, POLITICO reported. The former U.S. epicenter of the outbreak reported fewer than 350 cases per day in the last week, a far cry from the 6,377 reported on April 6 at the outbreak’s peak.

“This is more than two weeks since the peak of the protests, and the incubation period of the virus is generally seven days,” UC San Francisco infectious disease expert Dr. Peter Chin-Hong told POLITICO. “I’m so psyched that all those fears were not realized.”

Philadelphia also found no link between protests and increased cases.

“We’ve not seen any evidence that the number of new cases identified in Philadelphia is associated with any protest activities,” the city’s Department of Health said in a statement reported by NBC News. “The daily numbers aren’t dropping as quickly as they have in the past few weeks, which is concerning, but we can’t tie that to protests, other summer activities, or anything else in particular.”

In Minneapolis, Health Partners said that only one percent of almost 10,000 protesters tested positive for the virus, and, in Seattle, the rate was less than one percent for 3,000, NBC News reported.

On the large scale, a National Bureau of Economic Research study published this month looked at more than 300 of the largest U.S. cities and found no evidence that COVID-19 cases increased in the weeks after protests began, CNN reported.

“Our findings suggest that any direct decrease in social distancing among the subset of the population participating in the protests is more than offset by increasing social distancing behavior among others who may choose to shelter-at-home and circumvent public places while the protests are underway,” the researchers said.

It is still possible the virus spread among protesters themselves and that the effect of demonstrations may change as they get smaller and less intense, the study said.

One possible exception to this trend is Los Angeles county. It reported more than 2,000 new cases for the third day in a row Monday, and County Public Health Director Barbara Ferrer said it was “highly likely” that demonstrations contributed to the spike, along with the reopening of businesses and an increase in social gatherings, the Los Angeles Times reported.

However, contact tracers do not track cases that emerge at public gatherings, so it is hard to distinguish cases originating at protests from cases caused by the reopening they coincided with, the Los Angeles Times pointed out.

One group that may have seen a surge in cases due to the protests is the Los Angeles Police Department (LAPD), where they rose from 170 to 206 in the last week, the Los Angeles Times reported further.

“This was a 21% increase and is about twice the rate of our historic rate of change over the history of the pandemic,” LAPD Chief Michel Moore told the civilian Police Commission Tuesday.

Moore partly attributed the increase to the demonstrations. However, protesters have criticized the LAPD for not wearing masks. There are lawsuits against the department over its protest response that cite officers’ lack of masks, as well as their crowding of arrestees into buses.

“One girl actually asked, ‘Why are none of you wearing masks? You’re putting all of us at risk.’ And one officer was like, ‘Well, we don’t believe that masks will help anyone,'” 24-year-old Kamila Baran, who was arrested at a protest June 1, told the Los Angeles Times. “This girl was basically fighting this officer, saying, like, ‘What about facts and statistics and science?’ And one of the officers was like, ‘Well, it makes it harder for us to do our job.'”

“Officers in many instances attempted to wear face coverings but were challenged in effectively communicating with each other or over the radio, given the conditions,” he said.

“I understand that my risk of driving while black, running while black — pick a saying — is extraordinarily high,” Dr. Georges Benjamin, executive director of the American Public Health Association, said. “I believe people are making risk-based decisions.”