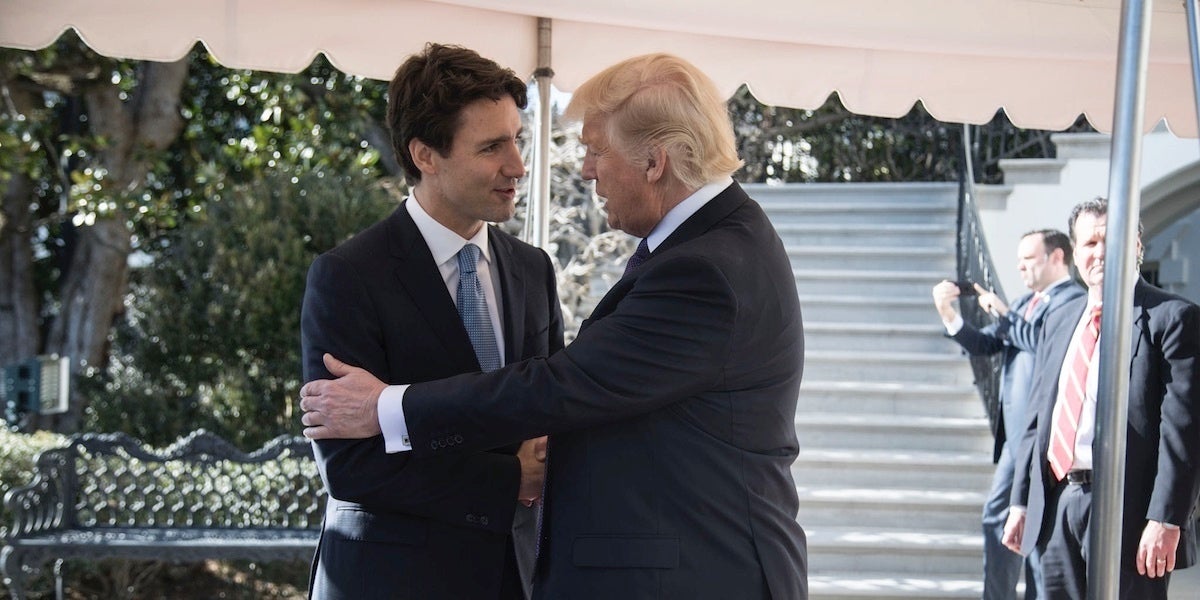 President Donald Trump headed for the Group of Seven (G7) summit in Canada on Friday but will be leaving before Saturday’s meeting on climate change, clean energy and oceans. The White House said an aide will take Trump’s place, CNN reported.

The announcement of his early departure comes amid a brewing war on tariffs. French President Emmanuel Macron and Canadian Prime Minister Justin Trudeau said at a joint press conference on Thursday they intended to challenge Trump’s tariffs on steel and aluminum imports at the G7 summit, according to the Associated Press.

Trump will depart for Singapore on Saturday for his meeting with North Korean leader Kim Jong Un.

“I am heading for Canada and the G-7 for talks that will mostly center on the long time unfair trade practiced against the United States,” the president tweeted today. “From there I go to Singapore and talks with North Korea on Denuclearization. Won’t be talking about the Russian Witch Hunt Hoax for a while!”

Frankly, it’s not surprising that Trump wants to skip the climate meeting with the leaders of Canada, France, Germany, Italy, Japan and the UK. The president
doesn’t believe in climate science, he wants to dramatically expand offshore oil drilling along the nation’s coasts, and his intention to withdraw the U.S. from the Paris agreement has created a significant rift between the U.S. and its G7 allies.

Just look at how incongruous
the aims of the G7 meeting are compared to Trump’s pro-fossil fuel agenda:

As
Earther noted, “One can hope Trump’s absence will reduce distractions.” Perhaps, as the website suggested, the meeting can instead focus on the Trudeau government’s recent $4.5 billion purchase of the controversial Trans Mountain tar sands pipeline.

Better yet, the G7 leaders can talk about a new
report from Britain’s Overseas Development Institute. The report revealed that their governments continue to subsidize at least $100 billion a year in subsidies for the production and use of coal, oil and gas, despite repeated pledges to phase out fossil fuels by 2025.