Trump on ‘Direct Collision Course’ With G20 Over Climate 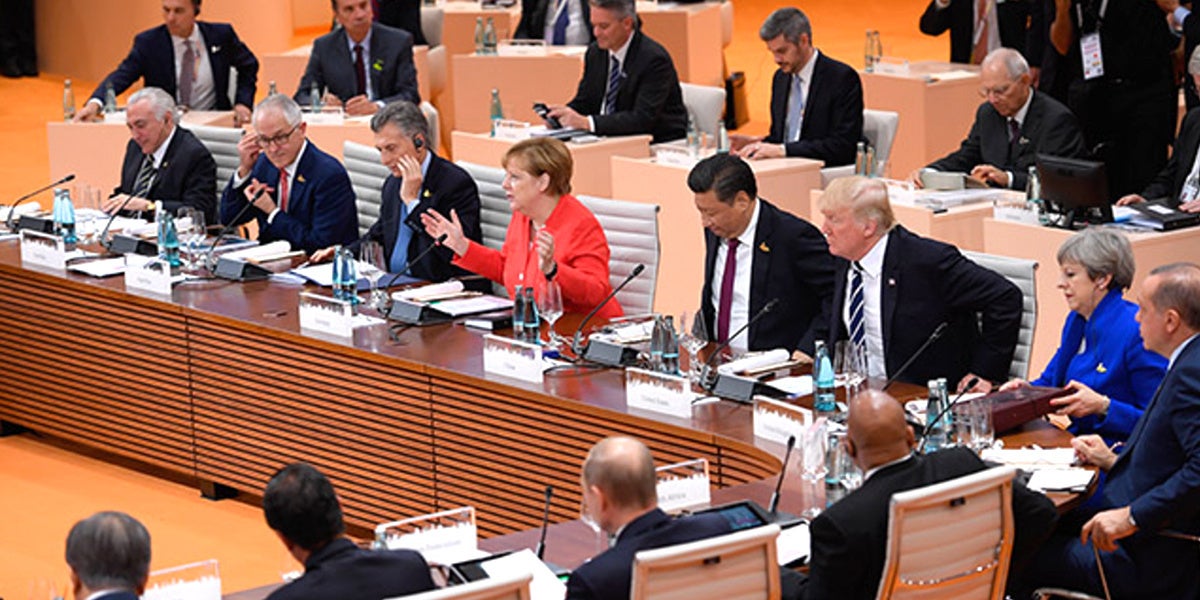 So the G20 summit is starting in Hamburg in Germany, after a day of angry protests which saw dozens arrested.

As the talks commence, the new international “Climate Pariah,” Donald Trump, is going to come under intense pressure from the G20 to reconsider pulling out of the Paris agreement.

German Chancellor Angela Merkel, the summit host, has publicly stated that this year’s summit will focus on strengthening the Paris agreement, which “puts her on a direct collision course with the U.S. president,” according to the BBC.

She has told the media that despite Trump’s stance, tackling climate change remains a top priority for Europe, who will speak with “one voice” on the issue during the summit.

Speaking in front of the German parliament on Thursday, Merkel said, “The European Union unconditionally stands by its agreement in Paris and will implement it speedily and with determination.” She continued that the differences with Trump “are obvious and it would be dishonest to try to cover that up.”

She added, “Since the decision of the United States to leave the Paris climate agreement, we are more determined than ever to make it a success.”

Merkel is backed by French President Emmanuel Macron, who has said Europe will “clearly reaffirm our very strong commitment to the Paris accords,” adding, “I hope that the others can be brought back to their senses.”

Trump will get pressure from other G20 leaders, too. Speaking earlier Thursday, Canadian Prime Minister Justin Trudeau said that the G20 would tell Trump “it’s important to take a lead role in tackling climate change and creating good jobs.”

On the one hand, you can argue that the G20 leaders are being hypocritical for castigating Trump. As Oil Change and others pointed out this week, the G20 provides nearly four times more public finance to fossil fuels than to clean energy. In total, public fossil fuel financing from G20 countries averaged some $71.8 billion per year. The leaders were accused of “talking out of both sides of their mouths.”

If they really are promoting climate leadership, then words are not enough. But on the other, Trump should not be allowed to get away with pulling out of the Paris agreement to satisfy the alt-right and his fossil fuel buddies.

As Trump comes under pressure, he’s meeting with Russian President Vladimir Putin face to face for the first time today. The feeling is that Trump, by pushing his “America First” policy and pulling out of Paris, has marginalized the U.S.

America is suddenly the pariah. Putin is now the moderate.

They have much to discuss, including Russian meddling in the U.S. elections, Islamic terrorism, North Korea, Ukraine and hopefully climate change.

Putin is still in favor of the Paris agreement, despite the U.S. withdrawal. The Russian president recently said the Paris climate agreement was a “secure basis for long-term climate regulation” and Russia wanted to make a “comprehensive contribution to its implementation.”

But let’s not kid ourselves about Putin. For Putin, his continued support for Paris is now a bargaining chip with which to secure other favors. The Russian economy is fueled by oil and gas and his political leverage comes in part by supplying large parts of Europe with that gas.

As Mother Jones recently noted, “Trump and Putin share a common priority: A commitment to the primacy of fossil fuels.”

Trump is not the only one who will be given a hard time over climate at the summit. Angela Merkel’s husband Joachim Sauer is reportedly giving Ivanka Trump and first lady Melania Trump a tour of the German Climate Computing Center, which has been modelling climate data for decades. Sauer is a professor of physical and theoretical chemistry.

And even if Trump makes it through the summit relatively unscathed, his views on climate change are still going to be continually challenged by NGO’s, scientists, the media and of course, kids. It will be the issue that haunts his presidency to its bitter end.

Indeed, finally a trial date has been set for a ground-breaking, climate-change lawsuit brought by 21 kids against the U.S. government. It is now scheduled to begin Feb. 5, 2018.

Mark the date on your calendar.