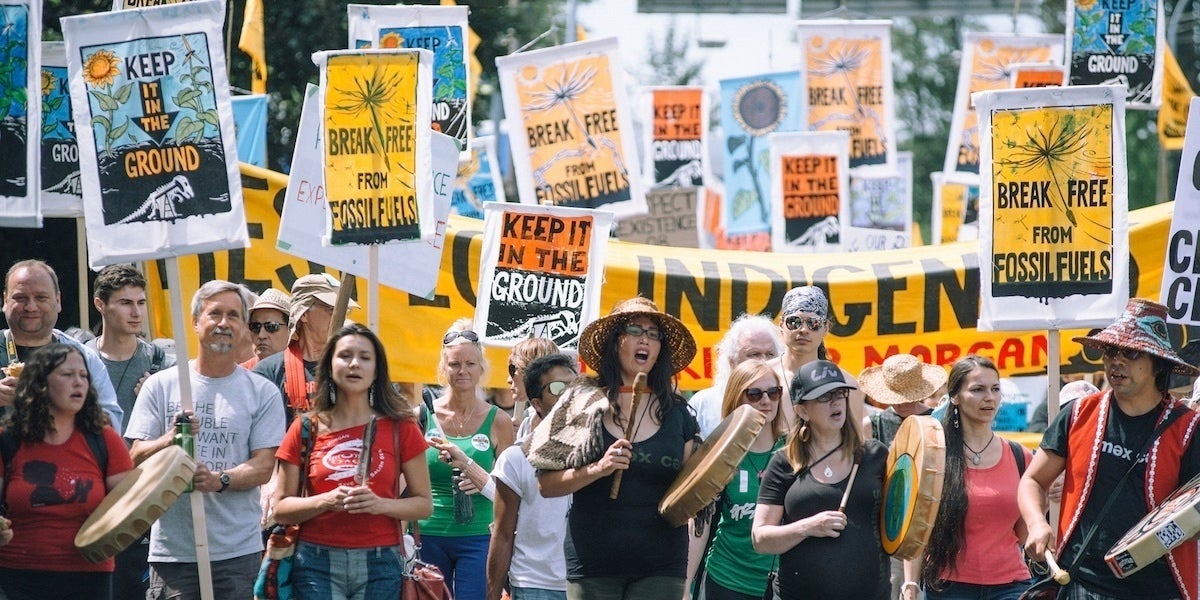 The Canadian government plans to spend $4.5 billion Canadian dollars ($3.5 billion) to buy Kinder Morgan’s existing
Trans Mountain pipeline and its controversial expansion project that will triple the amount of tar sands transported from Alberta to the coast of British Columbia.

The
pipeline has been at the center of widespread protests by environmentalists and some Indigenous groups. The announcement was met with condemnation from 350.org organizers, who slammed Prime Minister Justin Trudeau and his government for “turning Canada into a fossil fuel company.”

Kinder Morgan
halted all non-essential spending the pipeline project last month, citing continuing opposition in British Columbia. The company set a May 31 deadline to get assurances it can proceed with the project without delays.

Bill Morneau, the federal finance minister, said in Ottawa Tuesday that the government’s purchase will guarantee the summer construction season for workers and will ensure the project is built to completion.

“Our message today is simple—when we’re faced with an exceptional situation that puts jobs at risk, that puts our international reputation on the line, our government’s prepared to take action,” he said.

The agreement was approved by the Cabinet this morning and is subject to approval by Kinder Morgan shareholders. The purchase is expected to close this August, he said.

Morneau said the government will eventually sell the expanded pipeline back to the private sector.

Kinder Morgan Canada CEO Steve Kean said he was pleased with the deal.

“The outcome we have reached represents the best opportunity to complete the [Trans Mountain Pipeline system and the expansion project] and thereby realize the great national economic benefits promised by that project,” Kean said in a
statement.

Aurore Fauret, 350.org’s Canadian tar sands campaign coordinator, said in a statement that “in a single mandate, Justin Trudeau transformed from a climate champion into a Big Oil CEO.”

Trudeau, Fauret said, “had an opportunity to walk away from pipeline politics and get on with the real work of leading Canada, and the world, in a 100 percent renewable energy revolution, but instead he’s opted to ignore science, Indigenous rights and the voices of people across Canada and bailed out a dangerous, unwanted pipeline with public money.”

Since taking office, the Liberal party leader has introduced several environmental mandates, including a national price on carbon and a $1.5 billion ocean protection plan. However, environmentalists have criticized Trudeau’s support of the Trans Mountain pipeline expansion. He
insists that “the environment and the economy need to go together.”

Oil Change International pointed out that while Trudeau has signed up to the Paris climate goals, the amount of carbon that would be transported and ultimately burned by the pipeline means that Canada would miss those goals.

What’s more, The Star Vancouver reported that Kinder Morgan has reported 82 spills to the National Energy Board since 1961. The most recent spill occurred this past Sunday, when 100 liters (26 gallons) of a medium crude blend was released at the Darfield Pump Station near Barriere, British Columbia.

Opponents said the latest leak highlights the risks of the project. “We know spills happen and we know that it won’t get 100 percent cleaned up,” Charlene Aleck, a Tsleil-Waututh Nation councillor, told The Star, adding that the spill gave her a “sinking feeling” and “it reinforces the risk that Tsleil-Waututh has been speaking of all along.”

“Today is not the end of this story. Kinder Morgan abandoned this project because people organized all across the country to stop it, and we’ll do it again,” Fauret said. “This fight is far from over, and now that Justin Trudeau has turned the Canadian government into a fossil fuel company, it’s crystal clear who we’re up against.”

236 Civil Society Groups to Justin Trudeau: 'The Time for Investment in New Fossil Fuel Infrastructure Is Over' https://t.co/qnEt0U3b0t @350 @billmckibben