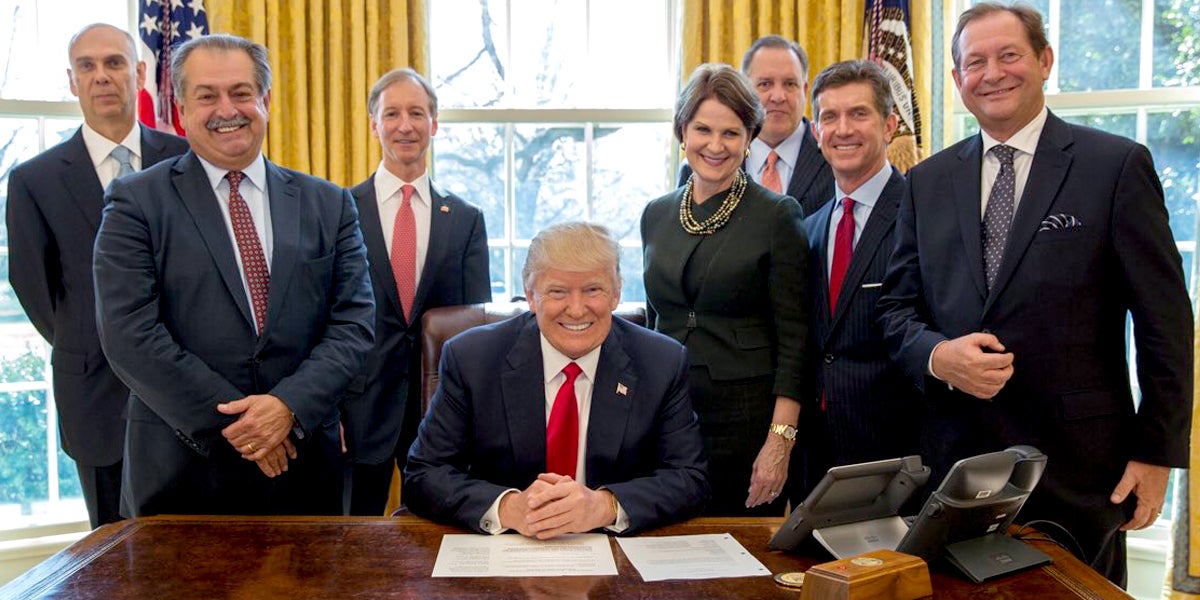 President Donald Trump has signed another executive order aimed at eliminating regulations that he claims are damaging to the U.S. economy, but some worry that the measure will roll back critical environmental protections.

The order, called “Enforcing the Regulatory Reform Agenda,” directs each government agency to create a task force to evaluate existing federal regulations and recommend whether they should be kept, repealed or modified.

A White House official told POLITICO that the task forces will “focus on eliminating costly and unnecessary regulations.”

The new order also directs agency heads to appoint “regulatory reform officers” to ensure that agencies are carrying out the president’s other executive orders, such as his recent 2-for-1 rule that requires federal agencies to repeal two old regulations for every new one.

“Excessive regulation is killing jobs,” Trump said during the signing ceremony. “Every regulation should have to pass a simple test: Does it make life better or safer for American workers or consumers? If the answer is no, we will be getting rid of it.”

“We will stop punishing companies for doing business in the United States,” Trump added. “It’s going to be absolutely just the opposite. They will be incentivized to doing business.”

Dow Chemical Co. chairman and CEO Andrew Liveris, who leads Trump’s advisory council on manufacturing and received the presidential signing pen. Just yesterday, Liveris praised the Trump administration for being “the most pro-business administration since the Founding Fathers.”

Bloomberg Politics pointed out that The White House already has an entire agency, the Office of Information and Regulatory Affairs, that reviews all government regulations before they are issued. It is unclear how the existing office will be working with the new officials.

Environmental groups have criticized Trump’s latest executive order, saying that it is crafted to help the country’s biggest polluters.

“The Trump administration wants less government, except when it wants more to carry out its oil and gas industry agenda,” Greenpeace spokesperson Travis Nichols said in a statement. “This executive order will put Trump’s unvetted corporate minions above experts at our federal agencies in charge of protecting our water, our land and our climate.”

“We can only hope that the resistance inside these agencies will be strong enough to stop these destructive Trump toadies from dismantling protections for the American people,” Nichols continued. “This administration and its deluded enforcers will never understand what it feels like to worry about the water their families are drinking, the food their families are eating or if their houses will survive the next superstorm. It’s up to all of us outside the billionaire bubble to resist the ways in which the Trump administration is destroying this country.”

Tiernan Sittenfeld of the League of Conservation Voters had similar sentiments.

“President Trump is rigging the system so corporate lobbyists can lower standards that protect the public health and safety of all people in this country,” Sittenfeld told NPR . “These task forces will attempt to roll back common-sense protections for the air we breathe, the water we drink and the lands we cherish.”

Waterkeeper Alliance said that Trump’s latest order will only help destroy agencies and regulations that are designed to protect people and the environment. For instance, rules that ensure that tap water does not contain pollutants that cause cancer or brain damage could be on the chopping block.

“President Trump’s action to slash regulation is more like a pollution prison sentence, subjecting our communities to increased exposure to polluted water, toxins, disease and economic burden for generations to come. There is no justification for this type of brazen policy that only benefits the richest and most powerful corporations in the world,” said Waterkeeper Alliance Executive Director Marc Yaggi. “Americans and all world citizens want and deserve clean water and clean air. President Trump will face massive resistance to this misguided executive order.”

The Waterkeeper Alliance pointed out that the assumption that regulations have a negative impact on job creation is false.

“The reality is that only two-tenths of one percent of layoffs are caused by all governmental regulations, including environmental ones,” the organization said. “Earlier this month, job loss was cited as a major reason for overturning the Stream Protection Rule despite the fact that the Congressional Research Service found the rule would have created as many jobs as it eliminated. If implemented, the Stream Protection Rule would have protected an estimated 6,000 miles of streams over the next two decades from the devastating effects of mountaintop removal coal mining.”

Earlier at the Conservative Political Action Conference in Maryland on Friday, Trump promised to slash 75 percent of regulations all while claiming he wanted to “protect our environment.”

But Trump’s first month in the White House has been a nightmare for environmentalists and the planet alike. He has appointed a cabinet full of polluters with ties to the fossil fuel industry, and signed executive orders to push through the Keystone XL and Dakota Access Pipeline and nullify Obama-era climate policies such as the Stream Protection Rule.

And as Scott Faber, Environmental Working Group’s senior vice president for government affairs, put it, “President Trump is engineering the most hostile assault on public health, and mark my words, his administration’s planned destruction of many rules will put the health of millions of hard-working Americans and their families in jeopardy.”

Incidentally, it emerged Friday morning that his daughter, Ivanka Trump and Jared Kushner pushed the president to exclude language that criticized the Paris agreement from an upcoming executive order, the Wall Street Journal reported.