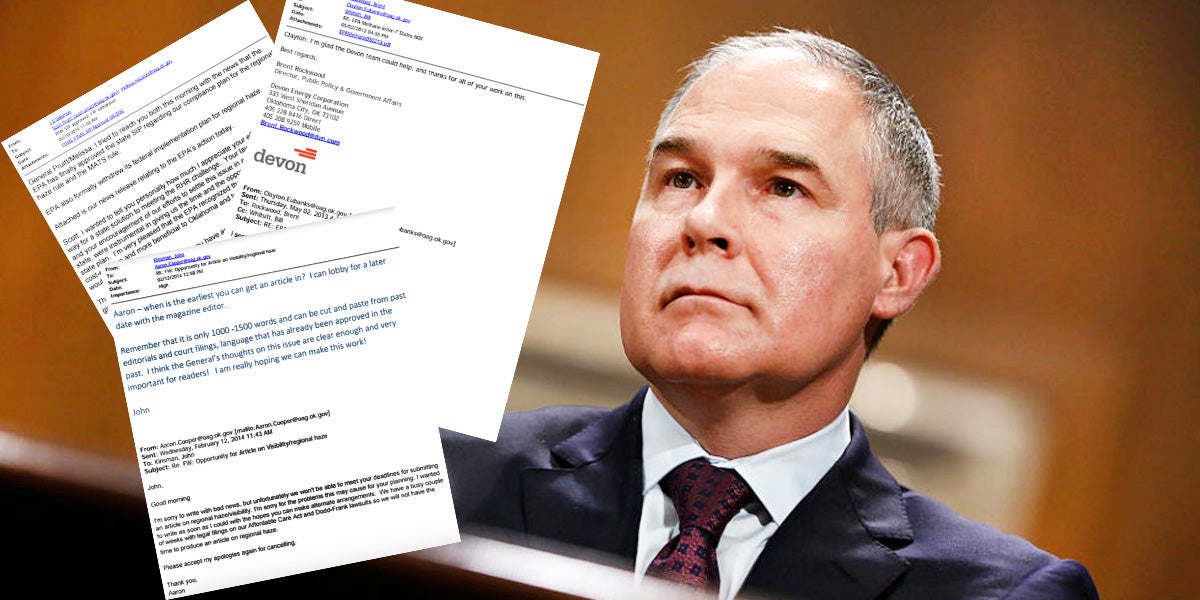 The Center for Media and Democracy (CMD) has published thousands of emails obtained from the office of former Oklahoma Attorney General, Scott Pruitt, who was recently sworn in as the head of the U.S. Environmental Protection Agency (EPA) for the Trump administration.

Housed online in searchable form by CMD, the emails cover Pruitt’s time spent as the Sooner State’s lead legal advocate and in particular show a “close and friendly relationship between Scott Pruitt’s office and the fossil fuel industry,” CMD said in a press release. CMD was forced to go to court in Oklahoma to secure the release of the emails, which had sat in a queue for two years after the organization had filed an open records request.

Among other things, the emails show extensive communication with hydraulic fracturing (“fracking“) giant Devon Energy, with Pruitt’s office not only involved in discussions with Devon about energy-related issues like proposed U.S. Bureau of Land Management fracking rules, but also more tangential matters like how a proposed airline merger might affect Devon’s international travel costs. They also show a close relationship with groups such as the Koch Industries-funded Americans for Prosperity and the Oklahoma Public Policy Council, the latter a member of the influential conservative State Policy Network.

On the U.S. Bureau of Land Management fracking rule, Pruitt’s office solicited input from Devon, the Oklahoma City fracking company, which seemed to incorporate the feedback in the company’s formal legal response. Pruitt’s office was aiming to sue the U.S. Bureau of Land Management on the proposed rules, a case multiple states eventually won, getting indispensable aid in the effort from the Interstate Oil and Gas Compact Commission.

“Any suggestions?” Pruitt’s office wrote in a May 1, 2013 email to a Devon vice president. Attachments missing from the Freedom of Information Act response make it unclear to what extent edits suggested by Devon were actually inserted into the Attorney General’s correspondence, although Pruitt’s deputy later wrote “thanks for all your help on this.” 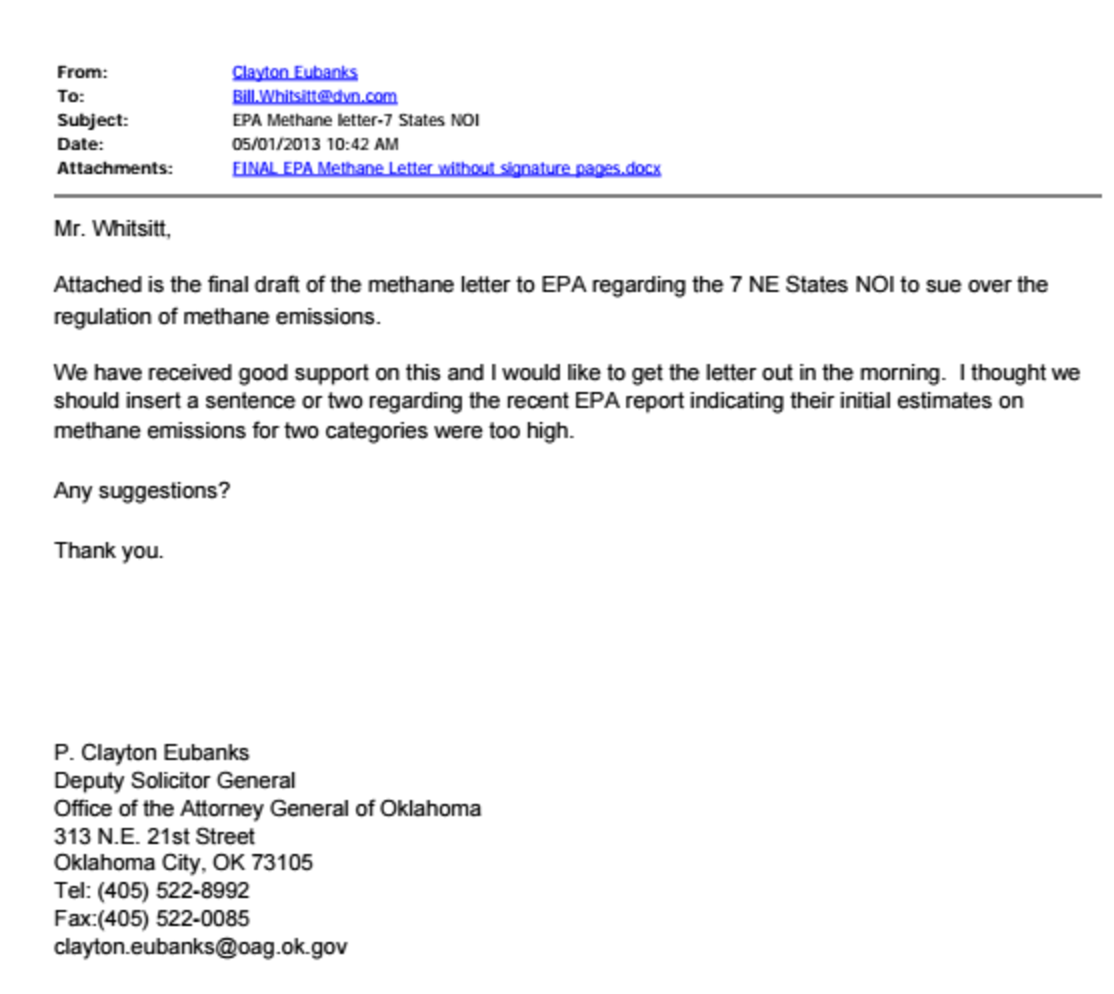 In two other emails dated May 1, 2013, a Devon Energy director replied with suggested changes to Pruitt’s office. The next day, Pruitt’s office sent the final draft of the letter to Devon, which replied, “I’m glad the Devon team could help and thanks for all of your work on this.” 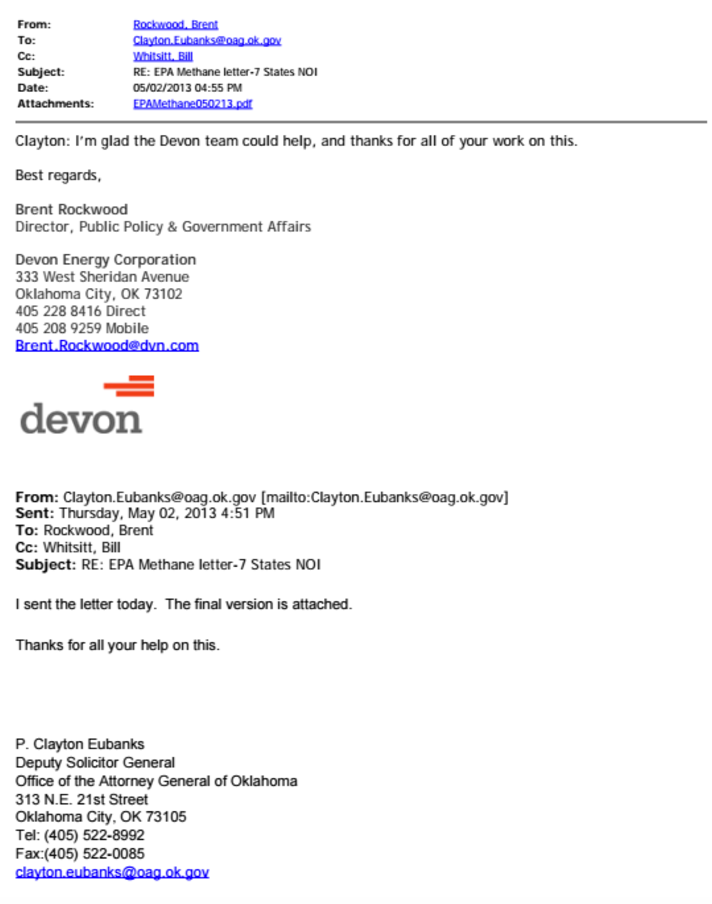 This batch of emails was not among those published by the New York Times as a part of its investigation into the correspondence Pruitt and other Republican state-level Attorneys General had with energy companies, which revealed that Devon had ghostwritten letters which Pruitt’s office sent to federal officials and agencies.

Another section of the emails (page 562) shows that an official from Edison Electric Institute emailed Pruitt’s office to solicit an article for the Air and Waste Management Association Journal on the topic of regional haze. When Pruitt’s spokesman said the office will not be able to make the deadline, the Edison Electric Institute official told them not to worry because it can “be cut and paste from past editorials and court filings, language that has already been approved in the past.” 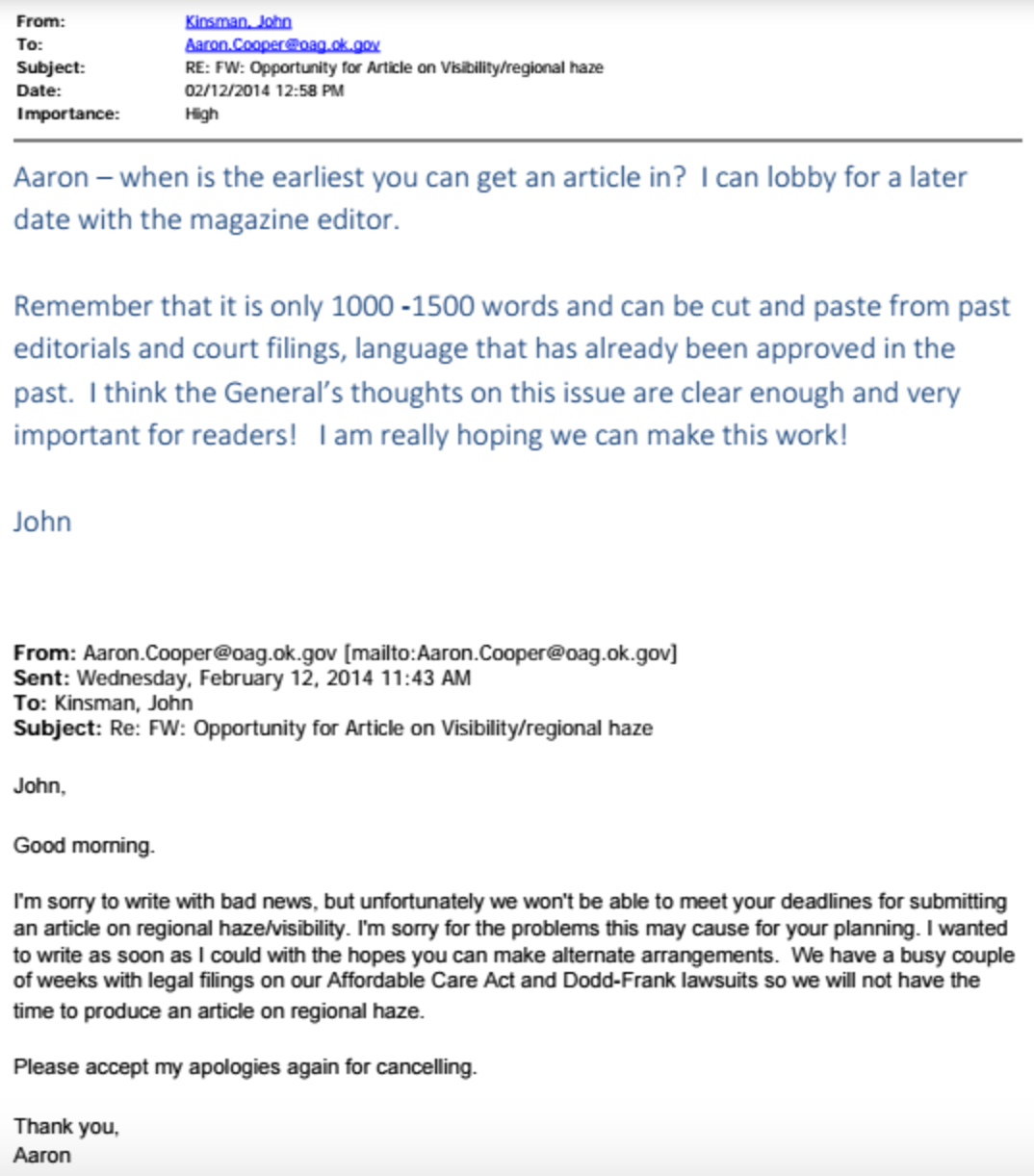 It does not appear Pruitt’s office ever wrote the article, however. But that same month, Stuart Solomon, president of Public Service Company of Oklahoma (a subsidiary of American Electric Power), thanked Pruitt “personally” in a February 2014 email for its help fending off the EPA‘s proposed regional haze rule. 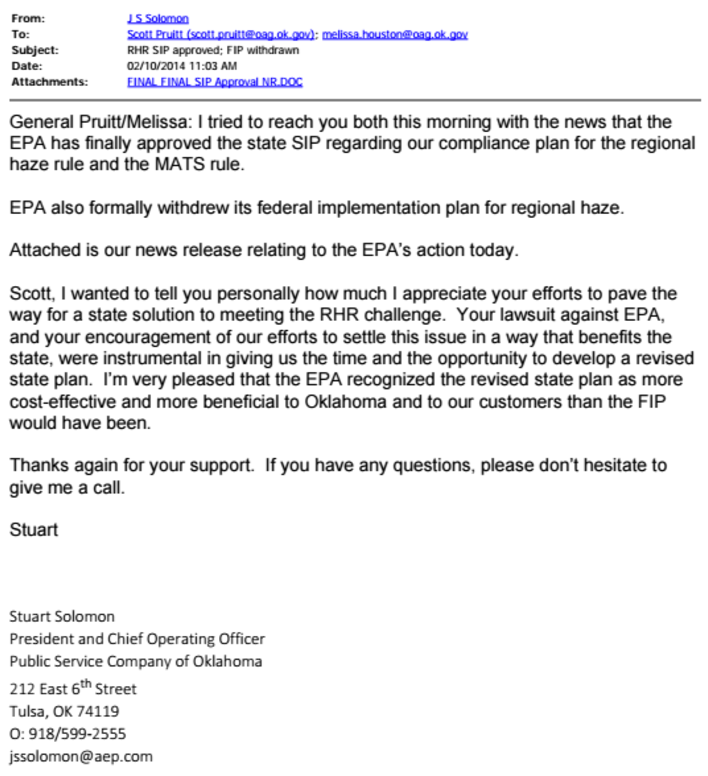 “We are pleased the EPA has approved a plan developed by PSO and state leaders,” Stuart Solomon, president and chief operating officer for Public Service Company of Oklahoma, said in a press release at the time. “I want to thank Governor Fallin and her administration for their leadership and assistance in helping develop this plan along with the Oklahoma Department of Environmental Quality.”

Pruitt and his office were not thanked within the press release. In July 2016, the U.S. Court of Appears issued a stay on that rule and it was never promulgated.

The emails also shed new light on the relationship between Pruitt and the sphere of advocacy outfits and legal groups funded by Koch Industries‘ billionaires Charles and David Koch.

For example, Pruitt and many other Attorneys General—plus industry actors at companies such as Southern Company, ConocoPhillips, Chesapeake Energy, TransCanada, Devon Energy, Marathon Oil and others—received an invitation (see page 560) to an event hosted by George Mason University, the Koch-funded libertarian bastion, at its Mason Attorneys General Education Program. That invite came from Henry Butler, dean of the George Mason University School of Law.

Harold Hamm, President Trump’s campaign energy adviser, was also included on the list of those invited, as well. An email attachment of the invite was not included in the batch.

Too Little, Too Late?

These are some of the highlights found within the massive batch of emails. CMD argued, as the Democratic party’s Senate leadership posited, that these emails would have been useful in doing their constitutional “advise and consent” confirmation process work for Pruitt.

“There is no valid legal justification for the emails we received last night not being released prior to Pruitt’s confirmation vote other than to evade public scrutiny,” said Arn Pearson, general counsel for CMD. “There are hundreds of emails between the Attorney General’s office, Devon Energy and other polluters that Senators should have been permitted to review prior to their vote to assess Pruitt’s ties to the fossil fuel industry.”