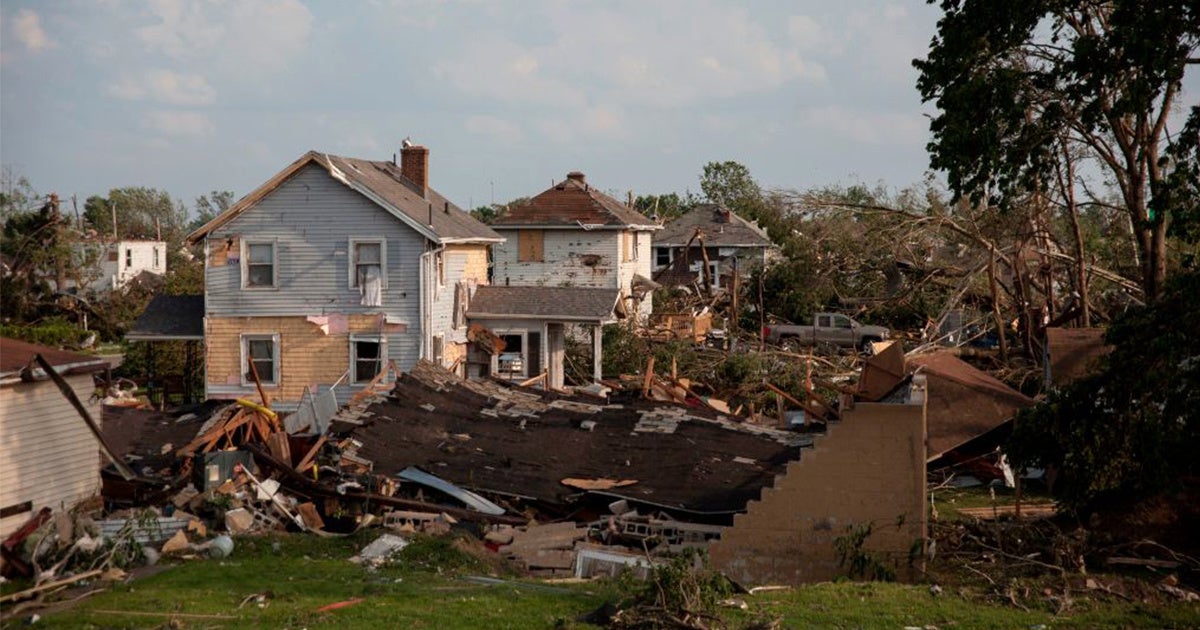 Houses damaged by a tornado in Dayton, Ohio on May 28. SETH HERALD / AFP / Getty Images

The U.S. has recently experienced one of its worst tornado outbreaks of the past decade, with more than 500 reported over 30 days. The number so far this year is also more than 200 above average.

This has raised the question of what role, if any, climate change may have played in this unusually intensive period of tornadoes. While some have suggested that climate change is driving the above-average numbers, the scientific community has pushed back on these claims.

Scientists have relatively low confidence in detecting a link between tornado activity and climate change. They cannot exclude the possibility of a link; rather, the science is so uncertain that they simply do not know at this point.

What is clear is that there is no observable increase in the number of strong tornadoes in the U.S. over the past few decades. At the same time, tornadoes have become more clustered, with outbreaks of multiple tornadoes becoming more common even as the overall number has remained unchanged. There is also evidence that tornado “power” has been increasing in recent years.

Some research has suggested that climate change will create conditions more favorable to the formation of severe thunderstorms and tornadoes, but such effects are not detectable in observations today.

Any role for climate change in affecting the conditions for tornado formation is still very much an open question and the subject of ongoing research by the scientific community. 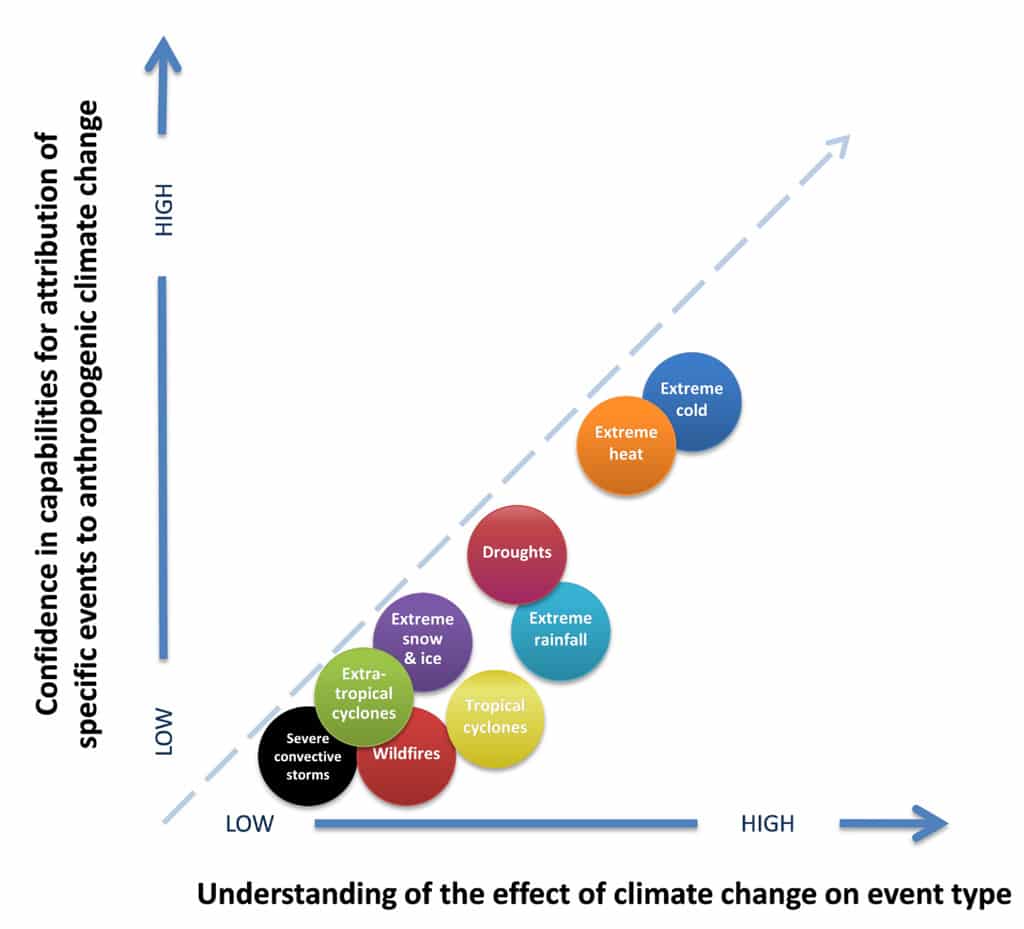 Understanding and attribution of climate change impacts on extreme events, by event type.

Figure from the U.S. National Academy of Sciences report on the Attribution of Extreme Weather Events published in 2016.

According to this ranking, severe convective storms that produce tornadoes have both the least well understood link to climate change and the lowest confidence in attributing any individual storm (or tornado) to climate change.

This does not mean that there is definitively no climate link.

Dr. Marshall Shepherd, a professor at the University of Georgia and an author of the NAS report, explains in a recent column in Forbes:

“It is important to point out that just because an event is low on the scale, that doesn’t mean there is no climate change influence; it simply means scientific evidence is not strong enough at this time to draw stronger conclusions.”

As the NAS report points out, there is a much clearer climate link with extreme rainfall. Extreme rainfall has already increased over much of the central U.S., potentially contributing to ongoing devastating flooding in the region this year.

The 2018 Fourth National Climate Assessment has similar reservations about any links between climate change and tornadoes. It says:

“Observed and projected future increases in certain types of extreme weather, such as heavy rainfall and extreme heat, can be directly linked to a warmer world. Other types of extreme weather, such as tornadoes, hail, and thunderstorms, are also exhibiting changes that may be related to climate change, but scientific understanding is not yet detailed enough to confidently project the direction and magnitude of future change.”

Some of the year-to-year variability in tornado numbers is influenced by El Niño and La Niña conditions. A 2017 paper found there are more U.S. tornadoes in La Niña years; however, the current large outbreak is during an El Niño year.

Other types of natural variability can affect tornado occurrence. For example, research has suggested that the “Madden-Julian oscillation,” a periodic swing in temperature and moisture starting in the Indian Ocean, can have a large impact on tornado activity in the U.S. Based on this insight, scientists predicted in late April that there would be a high likelihood of tornadoes in late May. 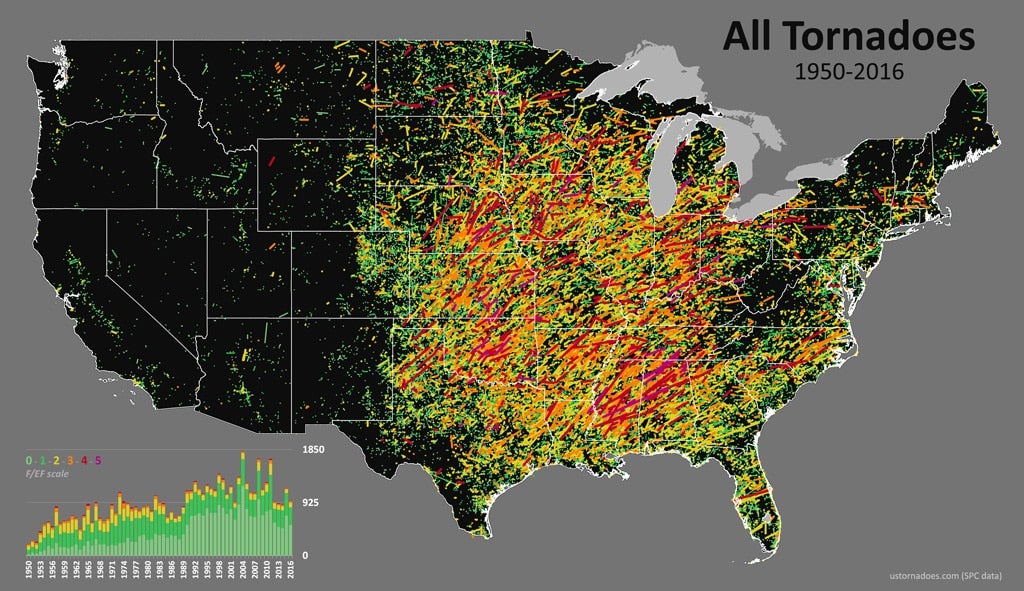 While the overall number of reported tornadoes in the U.S. has doubled since the 1950s, this statistic is highly misleading. Until the 1990s, tornado records were mostly based on someone spotting a tornado and reporting it to the National Weather Service.

As most tornadoes are small and last only a few minutes, the number observed and reported will be considerably smaller than the true number that occurred. The increase in tornadoes over time is largely due to the advent of modern “Doppler” weather radar systems in the 1990s, which can detect weak tornadoes and those in sparsely populated areas that may previously have gone unreported.

If weak tornadoes are excluded, there is no detectable trend in tornadoes over the past century. The figure below, based on an analysis of reports in NOAA’s Severe Weather Data Inventory by Carbon Brief, shows the total number of tornadoes in each year, excluding small F0 (or EF0) tornadoes that would likely have been underreported in the past.

If only the strongest tornadoes are considered (F3-F5 or EF3-EF5), there is even weak evidence of a decline in numbers over the past few decades. However, experts warn against reading too much into an apparent decline in the number of severe tornadoes. They point out that the rating of strong tornadoes has not been consistent and that “early official records systematically rated tornadoes stronger” than those in the past three decades.

While there is little evidence of an increase in the number of tornadoes, there is evidence that the pattern of tornado occurrence has been changing. A 2014 study in Science found that there has been considerably more clustering of tornadoes in recent decades. In other words, there are more days in which multiple tornadoes occur, but fewer overall days with tornadoes.

The number of days each year with at least one tornado has declined in recent decades, as the chart below shows in black. At the same time, days with more than 30 tornadoes are becoming more frequent (grey). 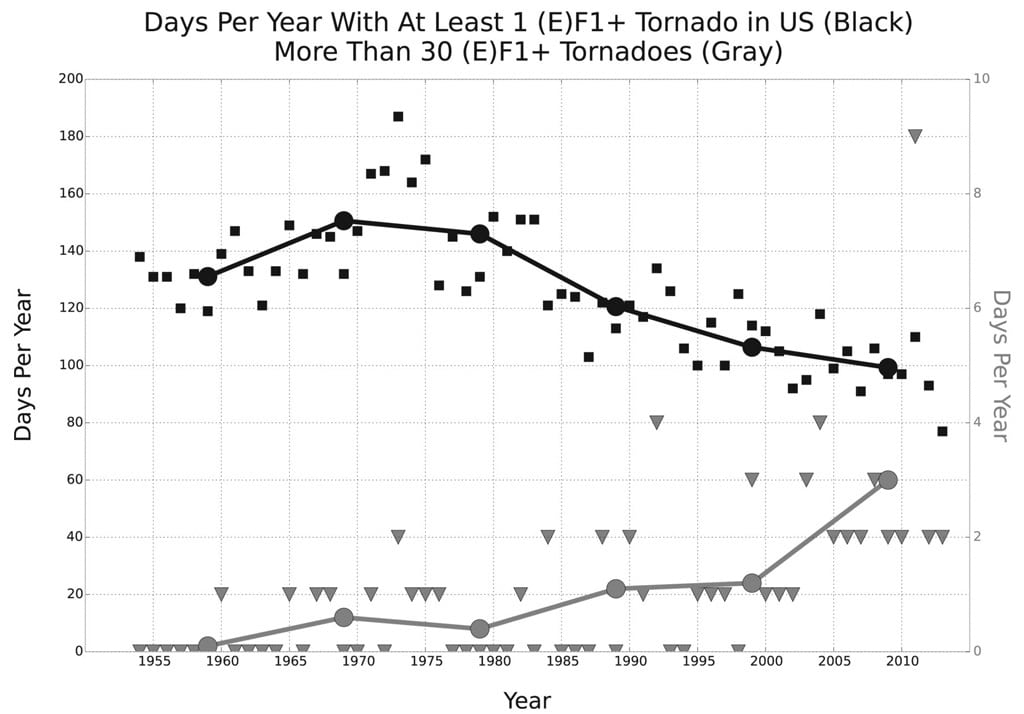 The authors suggest that this trend is robust, but do not have a good explanation as to why it is occurring. They cannot identify any reason why this behavior would be driven by observed climate changes, but at the same time say they cannot exclude climate change as a factor.

Other recent research suggests that overall tornado “power” has increased in recent years, once all other environmental variables are accounted for. A 2018 paper by Dr. James Elsner and colleagues found a clear upward trend in tornado power of 5.5% per year over the past few decades. However, they caution that “a majority of the trend is not attributable to changes in storm environments.”

There is limited evidence that tornadoes have become more frequent in recent years. However, a number of climate modeling studies have suggested that conditions favoring the development of severe thunderstorms — and tornadoes — in the U.S. should become more common in the future.

Modeling studies consistently suggest that the frequency and intensity of severe thunderstorms in the U.S. could increase as climate changes, particularly over the U.S. Midwest and Southern Great Plains during spring. There is some indication that the atmosphere will become more conducive to severe thunderstorm formation and increased intensity, but confidence in the model projections is low. Similarly, there is only low confidence in observations that storms have already become stronger or more frequent. Much of the lack of confidence comes from the difficulty in both monitoring and modeling small-scale and short-lived phenomena.

A 2013 paper by Dr. Noah Diffenbaugh and colleagues examined how the conditions needed for severe thunderstorms and tornadoes to develop are projected to change in climate models.

Climate models are too coarse to model individual tornadoes. However, they show a strong increase in conditions favoring severe thunderstorms over the eastern U.S. during spring and autumn months, particularly once global warming exceeds 2°C above preindustrial levels.

Dr. Jennifer Francis at Woods Hole Research Center in Massachusetts has argued that changes in Arctic sea ice have made ridge patterns in the jet stream more common. In addition, she says that this configuration of the jet stream has played a large role in the current tornado outbreak.

Other researchers have been more skeptical of the role of changing Arctic conditions in current weather patterns and stress that this is still an area of vigorous scientific debate.

While scientists cannot exclude a role for climate change in changes in tornado activity, links between the two are still largely speculative, particularly for individual events such as the recent outbreak in the U.S. As Diffenbaugh recently told The New York Times:

“Tornadoes are the kind of extreme event where we have the least confidence in our ability to attribute the odds or characteristics of individual events to an influence of global warming.”