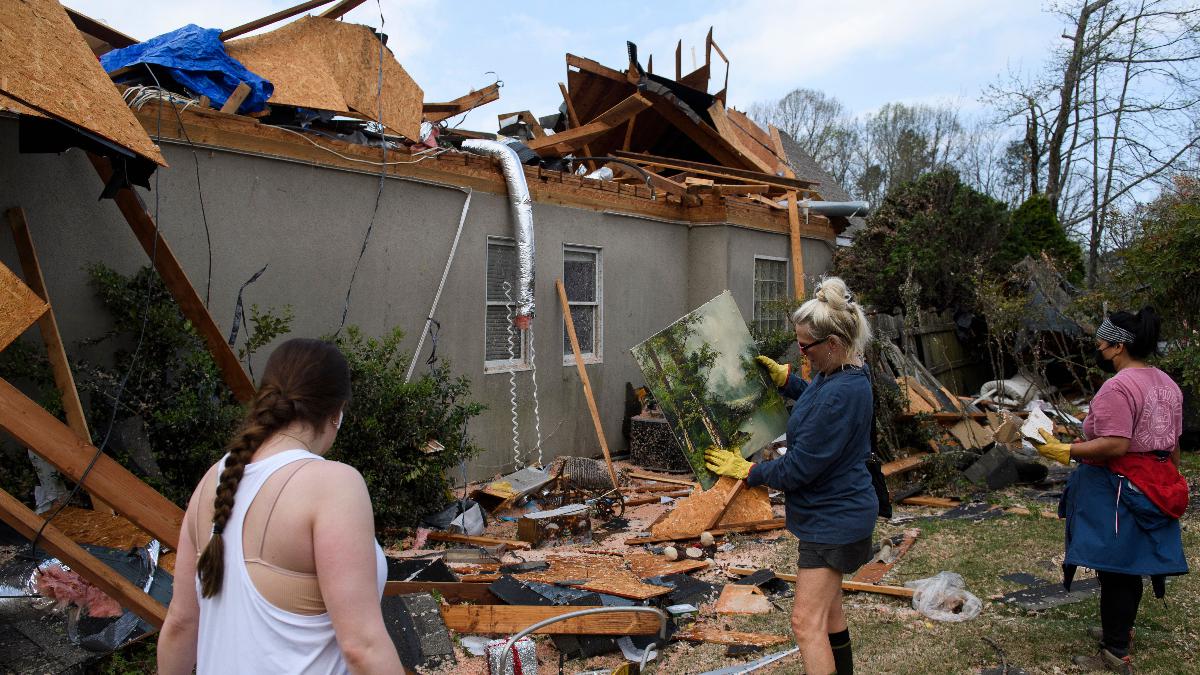 A volunteer picks up artwork found in debris from a destroyed home after a tornado a hit the Eagle Point community south of Birmingham, Alabama, on March 26, 2021. PATRICK T. FALLON / AFP via Getty Images

At least five people have died in a tornado outbreak that roared across the U.S. South Thursday and Friday, destroying homes and downing power lines.

As many as eight tornadoes may have touched down in the state of Alabama on Thursday, Birmingham National Weather Service (NWS) meteorologist John De Block told AL.com. One of them travelled around 100 miles across the state. The deadliest scythed diagonally through the rural Calhoun County.

“Five people lost their lives and for those families, it will never be the same,” Calhoun County Sheriff Matthew Wade said at a Thursday evening briefing reported by The Associated Press.

The tornadoes also caused injuries and extensive damage, including in the counties around Birmingham.

In the city of Pelham, 60 homes were damaged, 22 of them majorly, AL.com reported. Rick Partridge, who lives with his wife in the Cahaba Valleys Estates community in Pelham, said more than a dozen homes in the community were damaged or destroyed.

The storms also wreaked havoc on an airport in Centreville.

Alabama Emergency Management Agency Director Brian Hastings estimated that the number of homes damaged or destroyed across the state was in the hundreds, as NPR reported. At the height of the storms, around 30,000 people were without power.

De Block said the Alabama tornadoes were part of a “super cell” that later moved on to Georgia. A tornado likely touched down in the city of Newman, which is located southwest of Atlanta, around midnight Friday, NPR reported. The storm downed power lines and knocked out power for around 5,000 people, according to The Associated Press. It damaged buildings, including Newman High School.

Crews tell me they’ve never seen a storm cause this much damage here. @cbs46 pic.twitter.com/xBUV210IGq

Extreme weather lashed a large swathe of the South, threatening flooding and thunderstorms in Tennessee, Kentucky and the Carolinas, as The Associated Press reported. In Ohio, thunderstorms knocked out power for more than 100,000 people.

There is evidence that the traditional “tornado alley” is shifting east, away from the Great Plains and towards the U.S. South. This makes tornadoes deadlier, since the South is more populated and people are more likely to live in vulnerable mobile homes. In addition, tornadoes in the region often strike at night. There is some evidence that the climate crisis is behind the shift.