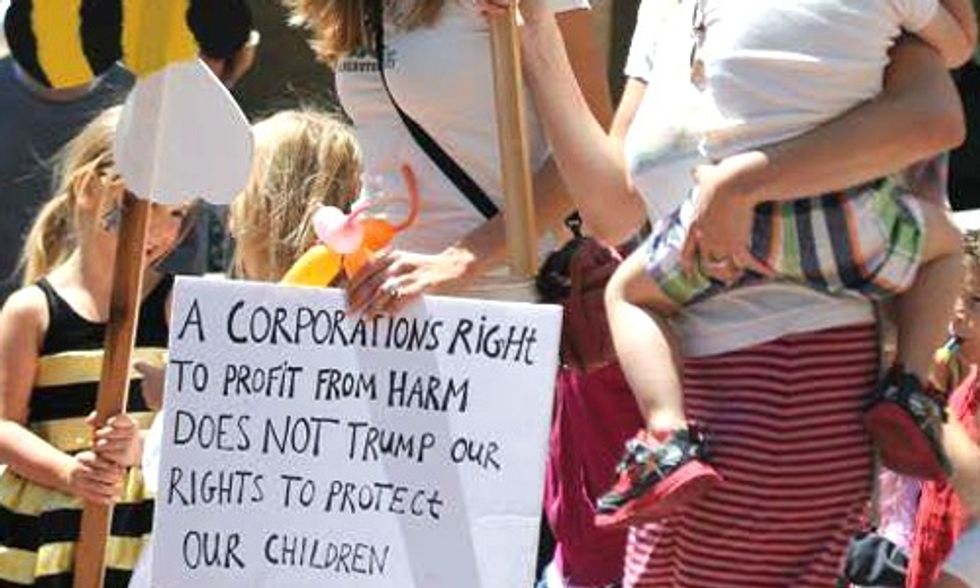 As an Episcopal pastor, Dan Hinkle is a man of peace and faith, but the issue of genetically modified foods (GMOs) makes him angry.

“We don’t know the long-term effects of genetic engineering; this is a questionable process,” said Hinkle, who lives in Lancaster, Pennsylvania. “We have been force fed something we should not have been. People are being hurt by this technology. If GMOs are so safe and feed the world, why not tell us about it? These issues have gotten me fired up.”

Hinkle’s concern about GMOs led him to become a founding member of GMO Free Lancaster, a non-profit group that is working to ban GMOs and pesticides in Lancaster County, Pennsylvania.

Zoe Swartz, a mother, started the group after the first March Against Monsanto in May 2013.

“There was no one involved in the march in Lancaster so we started organizing,” she said.

At first, the group focused on lobbying to pass a GMO labeling bill in Pennsylvania, but Swartz and other group members became frustrated by the political process.

“We met with our legislators but got disheartened because they weren’t responsive to a labeling bill,” Swartz said. “We came to the conclusion that it may not be a good idea to pour money into labeling.”

Since then the group has focused on community rights and working to ban GMOs and pesticides in Lancaster city. They plan to use a citizen initiative process to either get the city of Lancaster council to pass an ordinance restricting pesticides or put it on the ballot for a vote. According to Swartz, citizens’ initiatives can change state laws.

“We want to urge people to re-frame the conversation around community rights instead of on legislators’ terms,” she said. “People who are affected have the right to decide. We can just say no (to GMOs and pesticides), not on our lands, or on our tables.”

Because Lancaster County is an agricultural area, Swartz said that threats from pesticides are much greater.

“There are huge fields sprayed with pesticides that are near areas where children play,” she said.

To drive home the health dangers of pesticides, GMO Free Lancaster organized to test the breast milk of 50 mothers in the county for residues of glyphosate, the main ingredient in Monsanto’s Roundup herbicide. The highest level detected so far is 91 parts per billion in a mother who lives on a conventional farm where glyphosate is used. Sadly, the mother has an infant child with neuroblastoma, a form of cancer that affects young children.

“We hope the breast milk test will compel people to support the ban,” Swartz said. “We want to ban GMOs and associated chemicals starting with Lancaster city and then moving forward into the county.”

Lancaster County is fertile ground for taking action against GMOs. The county is home to the highest concentration of organic farms in Pennsylvania with more than 100; the county’s Amish population accounts for many of those farms. Lancaster is also a leader in farmland preservation. The area is known for its rich soils.

“Organic is a big thing in this area, but there are also a lot of agricultural chemicals and GMOs,” said Justin Snyder, an organic farmer with Lancaster Organic Growers.

GMO Free Lancaster is also trying to educate people about the benefits of organic food by providing resources for local organic food and giving presentations.

Susan Love, GMO Free Lancaster’s outreach coordinator, has seen positive changes in her family’s health since they switched to an organic diet. Her 20-year-old daughter is autistic, has Crohn’s disease and suffered from many ulcers. Since switching to an organic diet, her daughter’s health improved. A recent colonoscopy detected just one ulcer. She also started to talk more and recently began working at a local Goodwill office.

“We had lived with chronic illness for 20 years,” Love said. “It didn’t get better until we ate organic.”

Getting rid of GMOs and pesticides is just the first step for GMO Free Lancaster.

“We want to create a sustainable food system with urban gardens and people sharing food and growing the local food economy,” Swartz said.

Beyond the health and environmental concerns of GMOs and pesticides, Dan Hinkle has moral and theological reasons for being a part of GMO Free Lancaster.

“Food is sacred,” he said. “At the heart of Christian worship is a sacred meal, called the Holy Eucharist or Holy Communion. Eating means life. No one has the right to keep us in the dark about what we eat or feed our children and families."