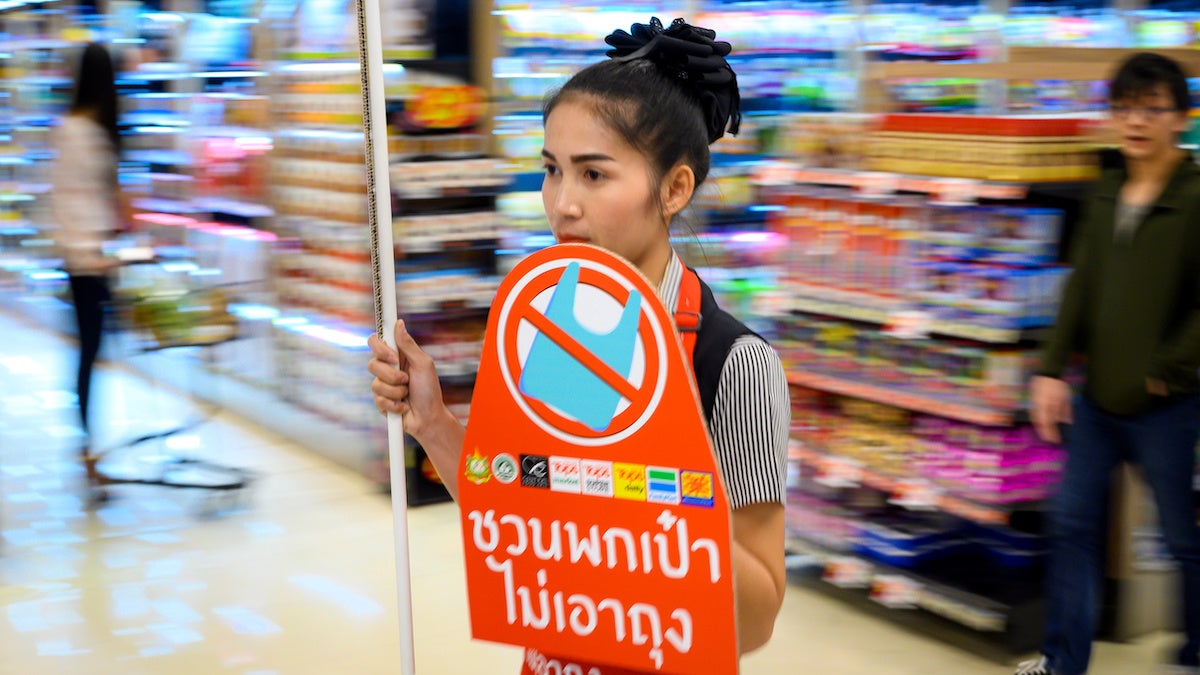 An employee carries a banner informing customers about the ban on free single-use plastic bags at a shopping mall in downtown Bangkok on Jan. 2, 2020. MLADEN ANTONOV / AFP via Getty Images

Thailand rang in 2020 with an effort to tackle the plastic crisis filling the country’s waste sites and choking its waterways. The country’s ban on plastic bags at major retailers began as soon as the clock struck midnight in Bangkok. A complete ban of bags that includes smaller shops will go into effect in 2021, as Reuters reported.

The campaign to reduce single-use plastics, especially plastic bags is an ongoing effort by the country’s government to reduce land and sea debris. There has been a public backlash to the plastic waste crisis in Thailand after several animals were found dead with inordinate amounts of plastic stuck in their digestive tracts, including land and sea mammals like deer and dugongs, as The Hill reported. Green sea turtles were also found to have choked on plastic, according to France 24. The epidemic of man-made litter killing Thailand’s wildlife led to some soul-searching from government and business leaders in Thailand.

“Thailand was ranked sixth among the world’s top countries that dumps waste into the sea,” said Minister of Natural Resources and Environment Varawut Silpa-Archa to reporters on New Year’s Day after handing out reusable bags to the public, as Reuters reported. “During the past five months, we were down to 10th … thanks to the cooperation of the Thai people.”

Major mall retailers and the ubiquitous 7-Eleven convenience stores will no longer distribute plastic bags under the new law. Instead, customers will have to bring in their own bag or pay a small fee for a reusable cloth-bag, according to France 24.

Some consumers were offended by the idea of paying for a bag.

“Instead, I will go to the local markets because they still give us plastic bags,” said Viroj Sinchairokekul, a 63-year-old said, at a Bangkok mall, to France 24.

The government has launched a public awareness campaign to make plastic bags taboo. It has run television ads that pixelate plastic bags with other cultural taboos like nudity, smoking cigarettes, alcohol use and violent crime, as France 24 reported.

The government’s effort to shame plastic bag use has already caused a drastic reduction in waste, according to government statistics. The ministry of Natural Resources and Environment said that Thailand reduced the use of plastic bags by 2 billion, or about 5,765 tons last year, in its campaign to get consumers to refuse plastic bags from stores, as Reuters reported.

“It’s not going to be easy to change the way of thinking and behavior of those people,” said Varawut Silpa-Archa, as Reuters reported.

While Thailand seeks to make plastic use taboo, environmental activists see much larger action needed to solve the plastic crisis.

“We should stop the ‘throw-away’ culture in Thailand,” said Pichmol Rugrod, of Greenpeace, as France 24 reported. She added that the cloth bags are woven from a fiber spun from microplastics. “Microplastic will then create another problem … it affects the environment in terms of when it’s in the soil because it has chemicals.”