Trump Approves Keystone XL Pipeline, Groups Vow ‘The Fight Is Not Over’ 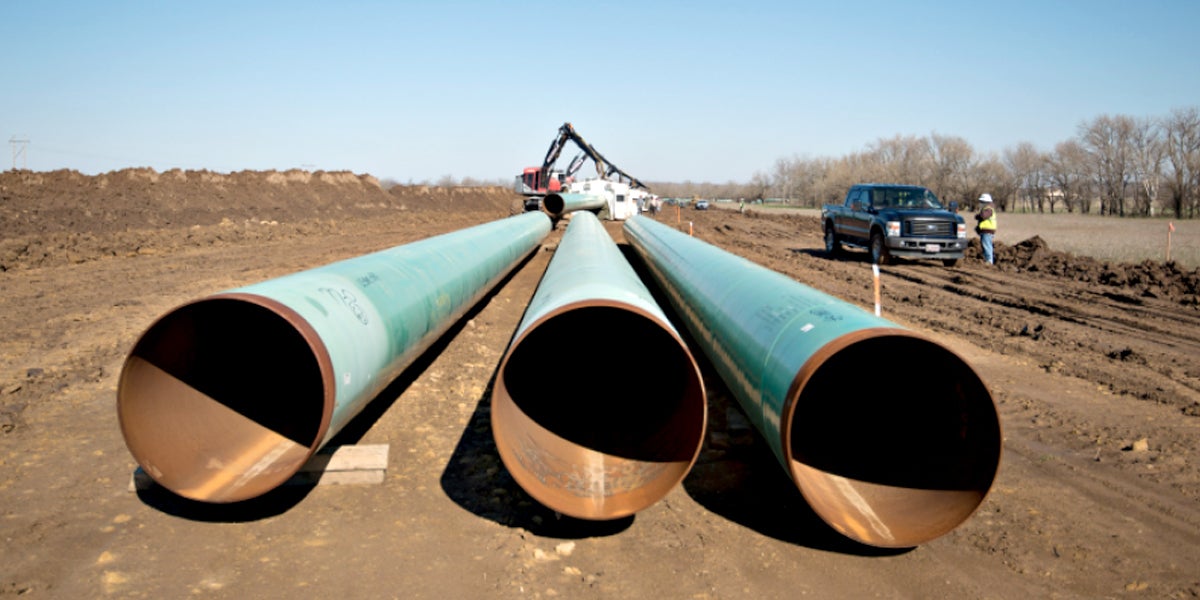 Nearly a decade after it first applied for a presidential permit, TransCanada is getting the green light from the Trump administration for its $8 billion Keystone XL pipeline.

POLITICO reported Thursday that the U.S. State Department’s undersecretary for political affairs, Tom Shannon, will approve by Monday the cross-border permit needed for the project to proceed.

Reuters reported an update Friday saying President Trump will announce the approval of the tar sands pipeline at the White House today with the CEO of TransCanada.

Sec. of State Rex Tillerson, former ExxonMobil CEO, recused himself from the Keystone decision since Exxon stands to profit from the pipeline.

The Keystone XL was blocked by President Obama two years ago because the pipeline would “not serve the national interests” of the United States.

But the November election changed everything. On Jan. 24, President Trump signed an executive order that invited TransCanada to reapply for a presidential permit. The company did so two days later.

Environmental groups and grassroots citizens have long opposed the pipeline, painting it as a symbol of the threat of climate change.

Once complete, the 1,200-mile pipeline will carry Alberta tar sands to processing and export facilities in the southern U.S.

“Keystone carries Canada’s oil through an unnecessary pipeline likely made of foreign steel, all while polluting our heartland, treading on the rights of Indigenous people and private landowners,” said Greenpeace USA climate campaign specialist Diana Best in reaction to today’s development.

“It isn’t what this country wants or needs. President Obama rejected the Keystone Pipeline because of public outcry,” she said. “We cannot let the Trump administration undo the progress that people all over the country have made to ensure we avoid catastrophic climate change.”

Best suggested that the president should shift his energy policy to prioritize renewables instead.

“Instead of pushing bogus claims about the potential of pipelines to create jobs, Trump should focus his efforts on the clean energy sector, the key to America’s future growth,” Best said. “Trump’s energy plan is more of the same—full of giveaways to his fossil fuel cronies at a time when renewable energy is surging ahead. Renewable energy is not only the future, but the only just economy for today. Keystone, the Dakota Access Pipeline, and fossil fuel infrastructure projects like them will only make billionaires richer and make the rest of us suffer.”

“We will resist these projects with our allies across the country and across borders, and we will continue to build the future the world wants to see,” she concluded.

Greenpeace is asking the State Department to provide documentation about the justification for Tillerson’s recusal and any waivers obtained or requested.

Although TransCanada might have secured the permit, POLITICO noted that the company still needs approval from the Nebraska Public Service Commission to build the pipeline through the state.

Additionally, Jane Kleeb, the president of Bold Alliance and Nebraska Democrat Party chair told the publication that construction will likely be delayed from landowners in the state who are unhappy with TransCanada’s use of eminent domain along the route.

“Trump’s decision will galvanize Americans, and further stiffen resistance to Trump’s campaign to sacrifice our planet for Big Oil profits,” Friends of the Earth President Erich Pica said. “The fight over Keystone XL is not over.”

Greenpeace USA Executive Director Annie Leonard agreed. “It takes money to build a pipeline, and the opposition movement to stop fossil fuel projects like Keystone will do everything it can to deprive TransCanada of any new funding for this ill-fated and unnecessary pipeline,” Leonard said.

“TransCanada may have a permit, but can they find the funding? Financial institutions should have learned by now that it’s risky to hitch themselves to a project that already faces historic on-the-ground opposition from private landowners and Indigenous sovereign nations and could unlock a massive environmental, health and climate disaster. Keystone was stopped once before, and it will be stopped again.”

Sierra Club Executive Director Michael Brune shared the same sentiment. “This project has already been defeated, and it will be once again. The project faces a long fight ahead in the states, but the fact remains that the American people do not want more fossil fuels, we do not want our private and public lands destroyed by a pipeline carrying the dirtiest fuel around, and we do not want our future and our children’s future to continue be threatened by climate change.”