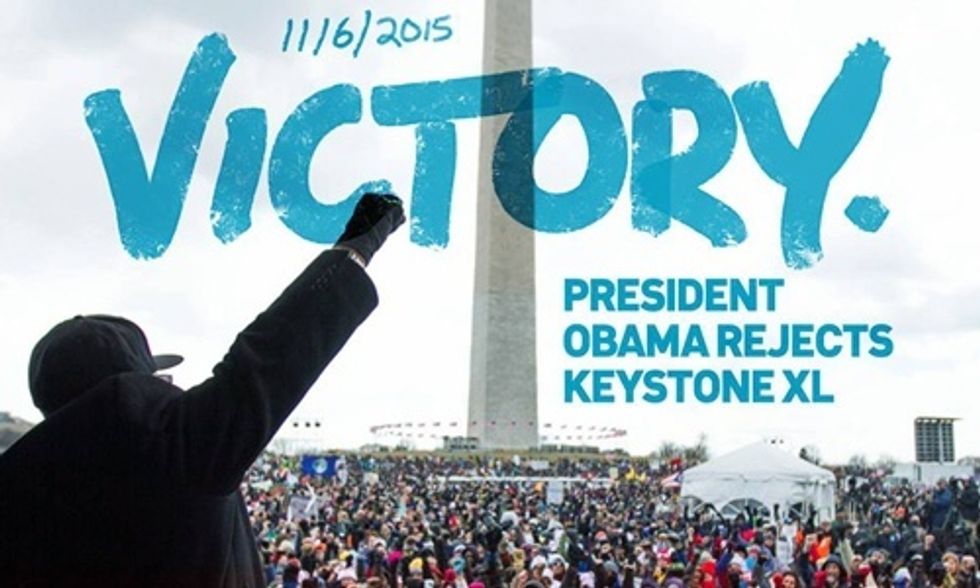 We just made history together. Four years to the day after we surrounded the White House, President Obama has rejected the Presidential Permit for the Keystone XL tar sands pipeline!

A head of state has never rejected a major fossil fuel project because of its climate impacts before. The President's decision sets the standard for what climate action looks like: standing up to the fossil fuel industry and keeping fossil fuels in the ground.

Make no mistake: this victory belongs to us, the movement. President Obama's courage today is a reflection of the courage shown by thousands of people who have sat in, marched, organized, (and opened a lot of emails) across North America against this pipeline.

This fight started with First Nations in Canada where the tar sands are extracted, and spread to farmers, ranchers and tribal nations along the pipeline route. Since then people from all walks of life have joined hands against Keystone, and the 830,000 barrels per day of destructive tar sands oil it would have carried through the country to be burned.

Together, we have shown what it takes to win: a determined, principled, unrelenting grassroots movement that takes to the streets whenever necessary, and isn't afraid to put our bodies on the line.

Politicians in Washington, DC didn’t make this happen. Our movement did. We want to thank everyone who has been a part of this campaign—from calling Congress to getting arrested on the White House fence.

Powered by our organizing, the tide is turning against the fossil fuel industry—every major new project they propose is being met by organized opposition on the ground, and politicians are lining up to stand behind our movement and say that we must keep the vast majority of fossil fuels underground.

Resistance is growing because the fossil fuel industry is more reckless than ever: from Texas where the Southern leg of Keystone XL pumps toxic tar sands, to Alberta where Big Oil foolishly plans to expand its mines, to California where they want to frack during a historic drought, to the enormous coal pits of Appalachia and Australia.

We have more tools than ever to work with. A strong fossil fuel resistance is already taking shape across the globe. Since we began fighting Keystone XL, the movement for divestment from fossil fuels has grown into a global powerhouse able to move tens of billions of dollars and undercut the social license of the fossil fuel industry. Fracking bans have stopped drilling in towns, counties and now whole states across the country. Communities are seizing their energy futures by demanding 100 percent renewable power in record numbers.

And when world leaders meet in Paris later this year, they’ll do so knowing what our movement can do, and what climate action really looks like: keeping fossil fuels in the ground.

Today we can approach all of our work with new eyes. We know that we can fight, and we can win.

This isn't just a victory for the climate movement—it's a victory for everyone who believes in the power of organized people, from the streets of Missouri, to the border crossings of Arizona, to the hills of South Dakota and Nebraska.

Together, we're on the path to real, substantive change.

‘The Francis Effect’: How the Pope Is Changing Americans’ Views on Climate Change