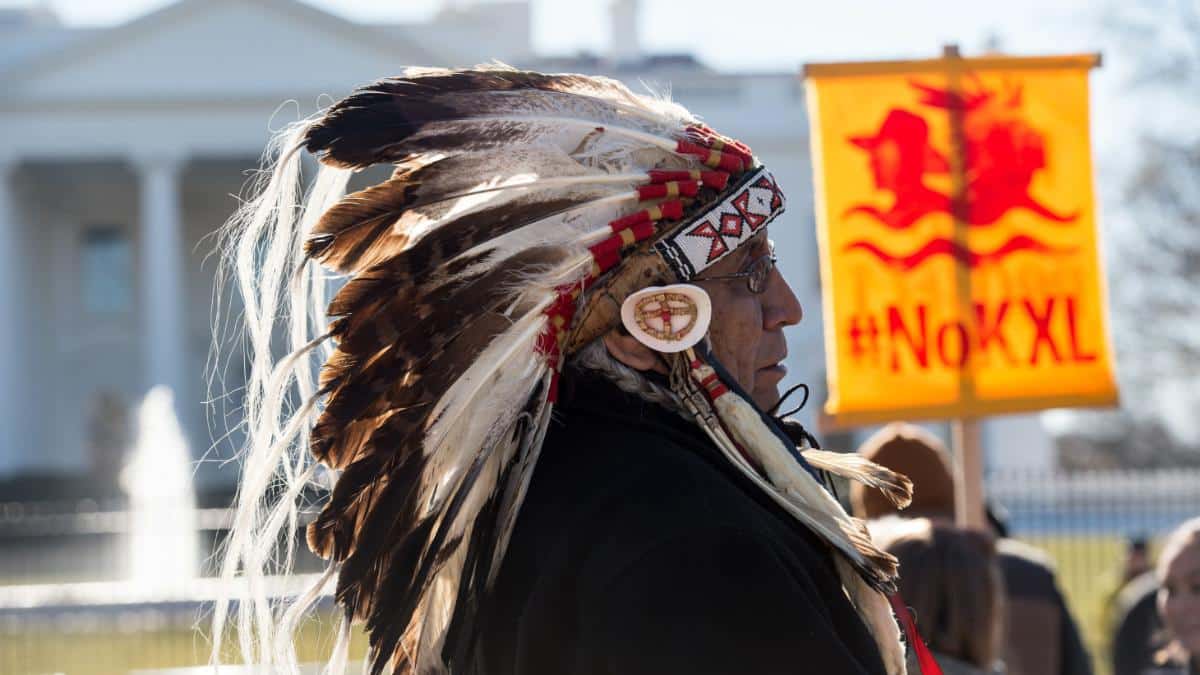 Lakota spiritual leader Chief Arvol Looking Horse attends a demonstration against the proposed Keystone XL pipeline from Canada to the Gulf of Mexico in front of the White House in Washington, DC, on January 28, 2015. Nicholas Kamm / AFP / Getty Images

The words “Rescind Keystone XL pipeline permit” were reportedly listed on a briefing note shared by the Biden transition team with U.S. stakeholders as part of a roundup of Biden’s planned day one executive actions. CTV News also reviewed the briefing documents, and a source familiar with Biden’s thinking told Reuters that the President-elect is planning to cancel the pipeline as one of his first acts.

“The Biden administration halting the Keystone XL pipeline is a momentous sign that he is listening, taking action and making good on his promises to people and the planet,” Kendall Mackey, 350.org Keep It In the Ground campaign manager, said in response to the news. “This decision to halt the Keystone XL pipeline on day one in office sets a precedent that all permitting decisions must pass a climate test and respect Indigenous rights.”

The Keystone XL pipeline was first announced in 2005, CBC News reported. The pipeline is being built to carry 830,000 barrels of crude oil a day, stretching about 1,200 miles from Alberta, Canada to Nebraska. From there it would connect with the original Keystone pipeline that carries oil to U.S. Gulf Coast refineries.

The pipeline has long been opposed by environmental and Indigenous groups, who are concerned about its climate impacts and the potential for leaks to harm wildlife and pollute drinking water, CTV News reported. Protests prompted the Obama administration to rescind the permit in 2015, but President Donald Trump reversed this decision with an executive order in early 2017.

Biden’s decision to once again rescind the permit is not surprising. His advisers have said in the past that he would move to block it again, according to HuffPost. Biden’s campaign has vocally opposed the pipeline since May, according to CTV News.

The news has sparked opposition in Canada.

“I am deeply concerned by reports that the incoming administration of President-elect Joe Biden may repeal the Presidential permit for the Keystone XL border crossing next week,” Alberta Premier Jason Kenney said in a Twitter statement. “Doing so would kill jobs on both sides of the border, weaken the critically important Canada-U.S. relationship and undermine U.S. national security by making the United States more dependent on OPEC oil imports in the future.”

Kirsten Hillman, Canada’s ambassador to the U.S., said the country still stood behind the pipeline and that it fit within Canada’s climate plans, CBC News reported.

“The Government of Canada continues to support the Keystone XL project and the benefits that it will bring to both Canada and the United States,” Hillman said.

Meanwhile, in a bid to make the project more appealing to Biden, owner TC Energy announced a plan on Sunday to reach zero emissions by 2030, hire union workers, sign Indigenous equity partners and install a .7 billion solar, wind and battery-powered operating system for the pipeline.

However, Canadian environmental groups and parties were pleased with the news.

“This is what true climate leadership looks like,” Annamie Paul, leader of the federal Green Party, told CTV News.

Keith Stewart, a senior energy strategist with Greenpeace Canada, urged Canadians to follow suit and move away from the pipeline, which he likened to “beating [a] dead horse,” CBC News reported.

“The Biden administration offers us a fresh start on addressing the climate crisis with a willing partner, so let’s not blow it by pushing pipelines,” Stewart said.