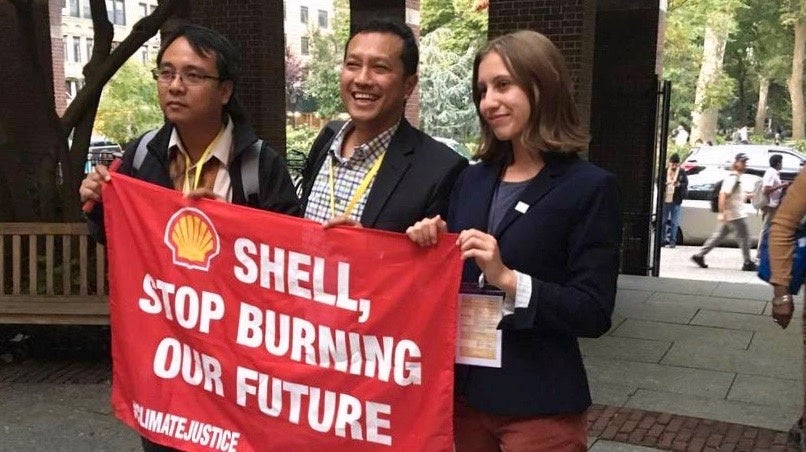 Two years after internal documents surfaced showing that Royal Dutch Shell, like ExxonMobil, knew about climate dangers decades ago, the oil giant released its latest annual report outlining its business strategy and approach to addressing climate change. Despite clear warnings from scientists, global health experts and even central banks of impending climate-driven crises, Shell’s report largely sends a message that everything is fine and the company’s “business strategy is sound.”

That is not to say that Shell is ignoring the challenges facing it and other oil majors. But overall Shell appears to be toeing the line between saying it is responding to the climate challenge and inevitable energy transition on the one hand, and maintaining its core oil and gas business model on the other.

Shell’s 2019 Annual Report is filled with statements that reveal the company’s perspective on the Paris agreement, the energy transition, and climate litigation and regulatory risk to its business. A few of these statements seem contradictory, and it is important to keep in mind the context of #ShellKnew when the company says now, in 2020, that it is committed to being part of the solution.

According to the report, there are three parts to Shell’s overall strategy going forward: to thrive in the energy transition, to provide a world-class investment case, and to sustain a strong societal license to operate. That may sound good on paper, but in reality significant challenges are mounting for each of these pillars.

In terms of the energy transition, Shell appears to be paying lip service to it more than actually revamping its portfolio or overhauling its business model. Its core business remains oil and gas. Period.

The company may be ahead of some other oil giants like Exxon and Chevron in terms of adding alternative energies to its energy mix, but overall its commitment to clean energy is minimal.

Shell notes in its report that it spends “-2 billion a year until 2020 in different services and products from a range of cleaner sources,” and “investments in power could grow to -3 billion a year on average” from 2021 to 2025. The vast majority of the company’s capital expenditure (bn to bn in 2020) goes into oil and gas, and failure to replace proved reserves could have a “material adverse effect.” Instead of aligning with the energy transition, Shell’s business model is based on continual hydrocarbon exploitation.

In terms of a “world-class investment,” the oil and gas sector is particularly vulnerable at the moment to financial pressure and investors are increasingly turning away from fossil fuels. Jim Cramer infamously dubbed fossil fuels “in the death knell phase.” Shell acknowledges this risk. It notes in its report that fossil fuel divestment “could have a material adverse effect on the price of our securities and our ability to access capital markets.”

Shell also recognizes its vulnerability to an eroding social license as the public and particularly younger generations start to scorn Big Oil.

“In 2019, many protested about climate change, sometimes directly targeting Shell,” Shell CEO Ben Van Beurden wrote in the report. The company includes challenges to its reputation as a risk factor, noting, “There is increasing focus on the role of oil and gas in the context of climate change and energy transition. This could negatively affect our brand, reputation and licence to operate.”

Shell did not immediately respond to a request for comment on the risk to its social license.

In its report, Shell says it fully supports the Paris agreement goal to limit warming well below 2 degrees C, and supports “the vision of a transition towards a net-zero emissions energy system.” But, in contrast to fellow European oil major BP, Shell is not committing its own business to net zero emissions.

Shell says it has “no immediate plans to move to a net-zero emissions portfolio over our investment horizon of 10-20 years.” Instead, Shell’s Net Carbon Footprint “ambition” is to reduce emissions (including its customers’ and suppliers’ emissions) of its energy production and products by 20 percent by 2035 and by 50 percent by 2050. This is not aligned with climate science guidelines that say complete decarbonization or “net zero” is necessary by 2050 at the latest.

Shell’s own business is therefore not aligned with the goal of the Paris agreement, and the company is facing a lawsuit over this in its home country of the Netherlands. Current emissions reduction plans or “Nationally Determined Contributions” (NDCs) submitted by countries under the Paris agreement are also inadequate. As Shell notes in its report, current NDCs amount to about 3 degrees C of warming. “In coming decades, we expect countries to tighten these NDCs to meet the goals of the Paris agreement,” the report states. Shell’s view appears to be that the world has decades to get its act together.

In that view, Shell says it is fully on board with the energy transition and plans to transform its own business “over time.” The report includes statements like “Shell aims to become an integrated power player and grow, over time, a material new business”, and, “for us, protecting the environment also means working to transform our product mix over time, for example, by expanding the choice of lower-carbon products we offer customers.”

Yet, in a seeming contradiction to these statements, Shell says it “agrees with the Intergovernmental Panel on Climate Change (IPCC) 1.5°C special report,” which clearly warned that limiting warming to 1.5°C would require, as Shell notes, “an even more rapid escalation in the scale and pace of change.”

While Shell claims to fully support the Paris agreement, in another seeming contradiction, the company states in its report that the government action necessary to meet Paris targets could harm its business: “Policies and regulations designed to limit the increase in global temperatures to well below 2°C could have a material adverse effect on Shell – through higher operating costs and reduced demand for some of our products.”

Yet, at the same time, Shell says it expects to be subject to increasing regulation. “We also expect that GHG regulation, as well as emission reduction actions by customers, will continue to result in suppression of demand for fossil fuels, either through taxes, fees and/or incentives to promote the sale of lower-carbon electric vehicles or even through the future prohibition of sales of new diesel or gasoline vehicles, such as the prohibition in the United Kingdom (UK) beginning in 2035. This could result in lower revenue and, in the long term, potential impairment of certain assets,” the report states.

Shell, like other fossil fuel companies, has long been concerned about governments imposing climate policies or regulations that would affect its business. Shell and its industry peers are already facing climate lawsuits, and Shell is explicitly identifying climate litigation as part of a broader risk factor associated with “rising climate change concern.”

In its report, Shell acknowledged the lawsuits could negatively impact its financial condition: “In some countries, governments, regulators, organisations and individuals have filed lawsuits seeking to hold fossil fuel companies liable for costs associated with climate change. While we believe these lawsuits to be without merit, losing any of these lawsuits could have a material adverse effect on our earnings, cash flows and financial condition.”

Shell actually foresaw climate-related lawsuits as a possibility more than 20 years ago. One of the internal documents that a Dutch news organization first uncovered (and published on the site Climate Files) is a 1998 document of Shell planning scenarios where the company hypothetically envisions a series of violent storms battering the eastern U.S., which then spur environmental NGOs to bring “a class-action suit against the US government and fossil-fuel companies on the grounds of neglecting what scientists (including their own) have been saying for years: that something must be done.”

One statement from Shell’s annual report rings particularly true: “Shell has long recognised that greenhouse gas (GHG) emissions from the use of fossil fuels are contributing to the warming of the climate system.”

Indeed, Shell has long known that fossil fuels are warming the planet and that the consequences would be of a huge magnitude.

One internal Shell document from 1988 called “The Greenhouse Effect” warned that GHG emissions would lead to warming over the next century, likely ranging from 1.5 C to 3.5 C. According to that document, “The changes may be the greatest in recorded history.” Some parts of the planet may become uninhabitable, and there may be “significant changes in sea level, ocean currents, precipitation patterns, regional temperature and weather,” it says. Impacts could be severe and “could have major social, economic, and political consequences.”

What did Shell do with that knowledge? It started introducing doubt and giving weight to a ‘significant minority’ of ‘alternative viewpoints’ as the full implications for the company’s business model became clear.

Shell was a member of the Global Climate Coalition, a fossil fuel industry-funded group that worked to undermine climate science and block climate policy internationally. The group formed in 1988 and Shell was a member throughout much of the 1990s.

During that time Shell was not exactly upfront with its own shareholders about potential risks climate change posed to its business. The first time Shell even mentioned climate change was in a 1991 annual report. But it wasn’t until 2004 that Shell made a clear warning in its annual report about financial risk associated with fossil fuel investment.

Critics have for many years accused Shell’s of greenwashing — acknowledging the climate threat and touting its “commitment” to being part of the solution, despite continuing to spend heavily on oil and gas with only minimal investment in alternative energy. Shell’s latest annual report suggests the company isn’t deviating far from that strategy.