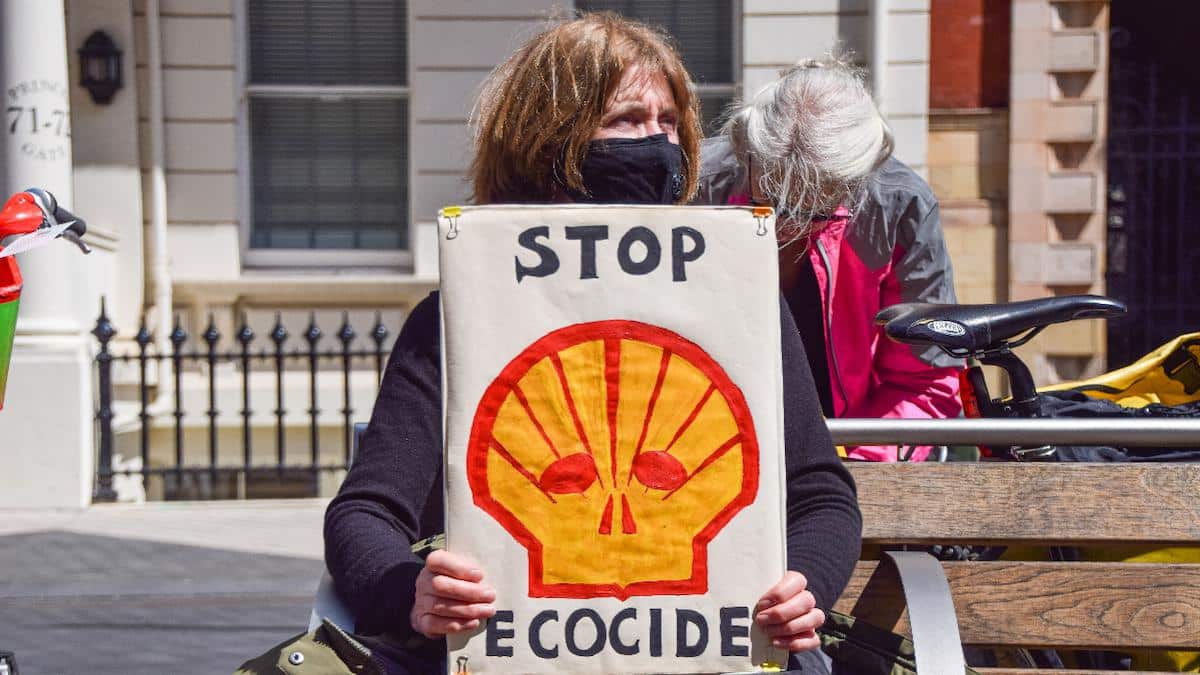 In a first-of-its-kind ruling, a court of law has held a private company responsible for its contributions to the climate crisis.

The court at The Hague in the Netherlands ruled Thursday that fossil-fuel giant Royal Dutch Shell must reduce its emissions by 45 percent by 2030.

“This is a turning point in history,” Roger Cox, a lawyer for Friends of the Earth Netherlands, said in a press release. “This case is unique because it is the first time a judge has ordered a large polluting company to comply with the Paris Climate Agreement. This ruling may also have major consequences for other big polluters.”

The lawsuit was first announced in 2018 by Friends of the Earth Netherlands (Milieudefensie). The group was joined in the case by six other organizations and 17,000 Dutch citizens. The plaintiffs successfully argued that Shell must abide by the Paris agreement, an international accord with a goal of limiting emissions to “well below” two degrees Celsius above pre-industrial levels, as BBC News pointed out. The ruling sends a message to companies that they may not only have to abide by national laws, but international policy as well.

Shell, for its part, said it would appeal the decision and argued that it had already taken internal steps to lower its emissions.

“Urgent action is needed on climate change which is why we have accelerated our efforts to become a net-zero emissions energy company by 2050, in step with society, with short-term targets to track our progress,” a Shell spokesperson said in a statement reported by The Guardian. “We are investing billions of dollars in low-carbon energy, including electric vehicle charging, hydrogen, renewables and biofuels. We want to grow demand for these products and scale up our new energy businesses even more quickly. We will continue to focus on these efforts and fully expect to appeal today’s disappointing court decision.”

While the court did acknowledge Shell’s climate commitments, it argued that they were not “concrete” and therefore ordered the Dutch-Anglo company to reduce its emissions to 45 percent of 2019 levels by 2030. It also said the company must move to do so immediately, and that it was responsible for the emissions of both its customers and suppliers, as Friends of the Earth pointed out.

Specifically, the court ruled that climate inaction on Shell’s part violated the rights to life and family life as outlined by the European Convention on Human Rights, according to The Guardian.

Shell was named the ninth greatest polluter in the world between 1988 and 2015 by the Carbon Majors database. It is currently responsible for around one percent of global greenhouse gas emissions. Advocates further produced documents in court showing that the company had known about climate change since the 1950s and about the severity of its consequences since 1986.

This is not the first time that a Dutch court has made a historic climate ruling. In 2019, the country’s Supreme Court upheld a 2015 ruling that the country must reduce emissions by at least 25 percent of 1990 levels by 2020, according to The AP.

However, activists say the precedent sent by today’s ruling could extend beyond one country.

“Our hope is that this verdict will trigger a wave of climate litigation against big polluters, to force them to stop extracting and burning fossil fuels,” Sara Shaw from Friends of the Earth International said in the press release. “This result is a win for communities in the global South who face devastating climate impacts now.”