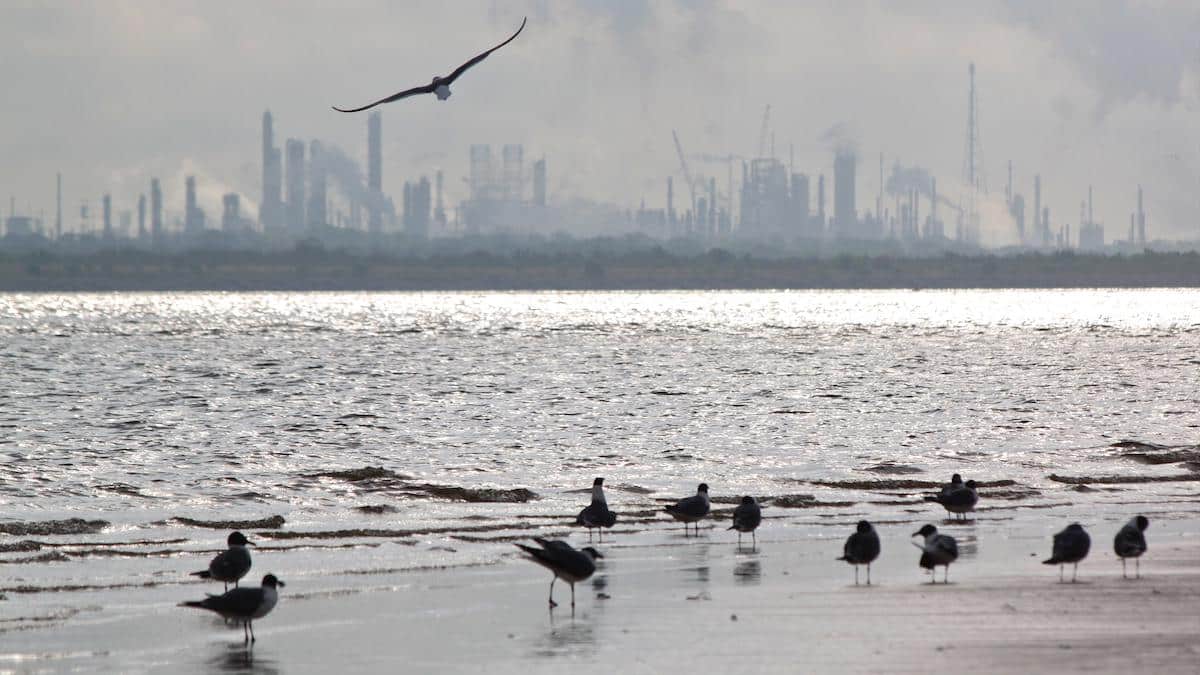 The ExxonMobil refinery in Baytown, Texas, seen across the Houston Ship Channel from Lynchburg Landing. Roy Luck / CC BY 2.0

ExxonMobil’s Monday announcement of new targets for addressing greenhouse gas emissions was met with derision by climate advocates who called the plan “too little, too late.”

The targets cover the next five years, include “input from shareholders,” and — according to the fossil fuel company — are in line with the goals of the Paris climate accord.

While some aspects of the plan, like a reduction in “flaring” of natural gas, were welcomed, others, like Exxon’s goal of reducing emissions intensity — not absolute emissions — came in for sharp scrutiny.

Exxon said it would start reporting so-called Scope 3 emissions in 2021, a large category of greenhouse gases emitted from fuels and products it sells to customers, such as jet fuel and gasoline.
By 2025, Exxon would reduce the intensity of its oilfield greenhouse gas emissions by 15% to 20% from 2016 levels. It did not set an overall emissions target, however, and reducing intensity means that emissions still could rise if oil and gas output grows.
The reduction would be supported by a 40%-50% decrease in methane intensity and a 35%-45% decrease in flaring intensity across Exxon’s global operations, with routine natural gas flaring eliminated within a decade, the company said.

Youth-led climate group Sunrise Movement declared the targets “grossly insufficient” and took the company to task for not announcing an end to “exploration or extraction” or “lobbying against climate action.”

Oil company executives (this you, @exxonmobil?) say they want to be a part of the solution.

No planned end to:
🛢️exploration or extraction
💵 lobbying against climate action

“ExxonMobil’s newly announced five-year plan is too little, too late,” said Kathy Mulvey, accountability director in the Climate and Energy Program at the Union of Concerned Scientists.

Rejecting Exxon’s description, Mulvey said the pledges “fall far short of what is needed to meet the principal goal of the Paris agreement.” She further accused the company dodging “its responsibility for heat-trapping emissions resulting from the burning of its oil and gas products.”

“ExxonMobil now says it will disclose these emissions, which make up the lion’s share — roughly 80 to 90 percent — of company emissions,” she continued. “However, in the same breath ExxonMobil attempts to shift their responsibility to the consumers using its products exactly as the company intends them to be used.”

Mulvey further pointed to Exxon being “the fourth leading contributor of global carbon dioxide and methane emissions from fossil fuel and cement industries over the last 50 years, during which time the company undeniably knew about its products’ harmful climate impacts. This bait-and-switch, along with ExxonMobil’s decades-long record of lying to consumers about the climate risks of its products, are reminiscent of the tobacco industry’s tactics.”

“Any company that fails to keep pace with what science demands,” Mulvey continued, “threatens its future while endangering the rest of us with escalating climate impacts and systemic risks to the global economy.”