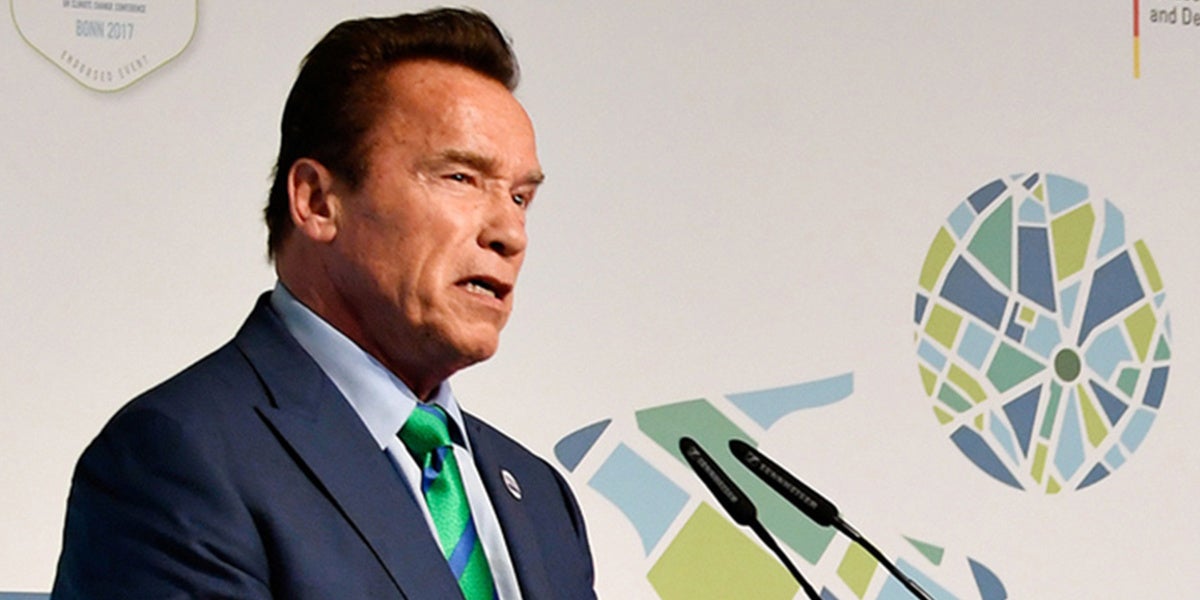 The Terminator is back. And this time he has Big Oil in his sights. Ex-California Governor Arnold Schwarzenegger has vowed to take on Big Oil “for knowingly killing people all over the world.”

Reflecting sentiments expressed by many commentators over the years, including myself, of how the denial and delay campaign by big oil over climate change is similar to the one by Big Tobacco over the evidence of smoking and health, Schwarzeneger said:

“This is no different from the smoking issue. The tobacco industry knew for years and years and years and decades, that smoking would kill people, would harm people and create cancer, and were hiding that fact from the people and denied it. Then eventually they were taken to court and had to pay hundreds of millions of dollars because of that.”

Speaking at the SXSW festival, Schwarzenegger added, “The oil companies knew from 1959 on, they did their own study that there would be global warming happening because of fossil fuels, and on top of it that it would be risky for people’s lives, that it would kill.”

The fact that oil companies knew about the dangers of climate change and denied the evidence has become known globally as the #Exxonknew scandal. The evidence of Big Oil’s culpability has been slowly amassed over the years by journalists, researchers, academics, activists and politicians. For a quick overview of Exxon‘s decade’s-long climate denial campaign, go here.

Indeed, as I have pointed out before, many of the people “researching climate deniers were loosely involved with Greenpeace USA, which released the ground-breaking Exxon Secrets data-base before turning their attention to the Koch denial machinery, but also others of note include the Climate Investigations Center, Union of Concerned Scientists; Sourcewatch; DeSmogBlog as well as academics, such as Naomi Oreskes, who wrote the wonderful Merchants of Doubt, as well as Michael Mann, the climate researcher, who himself has been on the frontline of the climate wars.”

To add further to this evidence, a report released last November by the Center for International Environmental Law (CIEL) synthesized years of research exposing what the oil industry and other major fossil fuel producers knew about climate change, when they knew it and what they did about it. The report evaluated the evidence in light of fundamental principles of legal responsibility and concluded that the major carbon producers could and should be held accountable for our changing climate.

CIEL President Carroll Muffett said last November, “Exxon and its oil industry allies have given us a decades-long history of climate change, climate denial and climate chaos. This report exposes that history and suggests that the future of these companies will be marked by climate litigation and climate accountability.”

This will encourage consumers to “go to an alternative route … hydrogen engine, electric cars, hybrid cars or something that will reduce the pollution in America and around the world,” he said.