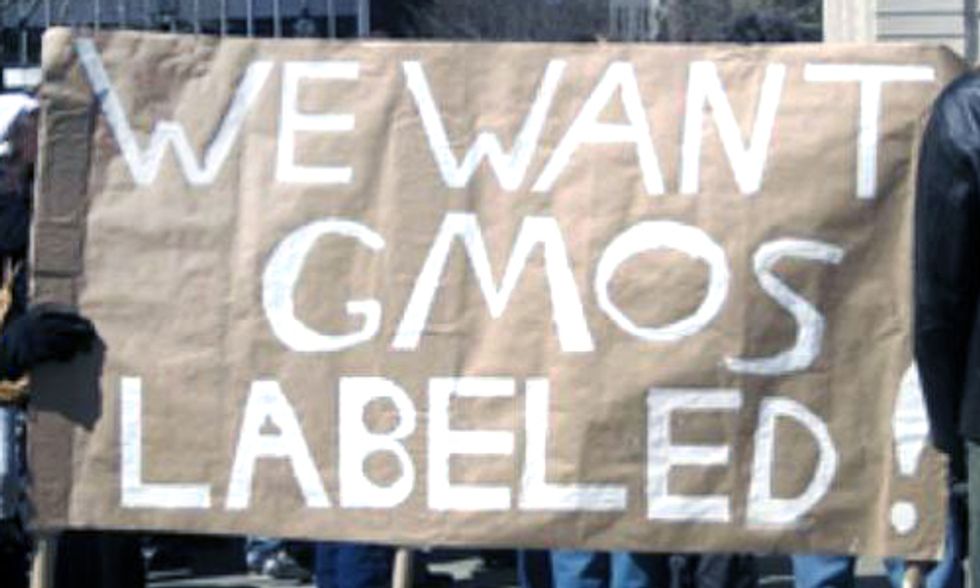 Rep. Mike Pompeo (R-KS) will introduce legislation this month backed by the Grocery Manufactures Association—including biotech giant Monsanto and Koch Industries—that would establish a voluntary labeling system for food made with genetically modified organisms (GMO), according to an industry insider.

“American consumers want the right to know what is in the food they eat, plain and simple,” said Rebecca Spector, who spearheads Maine's GE labeling legislative efforts at Center for Food Safety.

The bill includes a “prohibition against mandatory labeling,” according to The Hill, and is designed to head off the many state bills and ballot initiatives that would impose more stringent labeling regulations on GMOs.

“Consumers should be outraged that Rep. Pompeo, or any member of Congress, would co-sponsor a bill written by industry, for the sole purpose of protecting corporate and shareholder profits, when 90 percent of Americans oppose the proposed legislation,” said Ronnie Cummins, national director of the Organic Consumers Association.

Even though 64 countries have mandated the labeling of GMO foods, the U.S. has been slow to adopt such regulation.

Connecticut and Maine have passed labeling laws, but the rules do not go into effect until at least three other states establish the same requirement. In 2013, 50 bills were introduced to require labeling in 26 states. Rep. Peter DeFazio (D-OR) and Sen. Barbara Boxer (D-CA) recently introduced federal legislation that would require nationwide labeling of GE products.

“American consumers want the right to know what is in the food they eat, plain and simple,” said Rebecca Spector, who spearheads Maine's GE labeling legislative efforts at Center for Food Safety.

Other states with pending legislation on GMO labeling include California, Missouri, Minnesota and Rhode Island. In Arizona, Colorado, Florida, Hawaii and Oregon efforts are in motion to put the question on the ballot.

Rep. Pompeo's plan to introduce voluntary GMO food labeling legislation follows on the heels of last week’s comments by FDA Commissioner Margaret Hamburg that the U.S. Food & Drug Administration (FDA) plans to finalize guidance on the voluntary labeling of GMOs, despite the growing body of scientific evidence that GMOs, and the chemicals required to grow GMO crops, are potentially damaging to human health.

“More evidence surfaces every day implicating GMO-contaminated food in a long list of chronic illnesses," said Cummins. "Until further, comprehensive, independent safety testing is done on the impact of GMOs on human health, consumers should at the very least be able to avoid those foods by reading a label. This proposed bill would not only keep labels off of our food, but it is a direct attack on states’ constitutional right to pass laws to protect public health.”