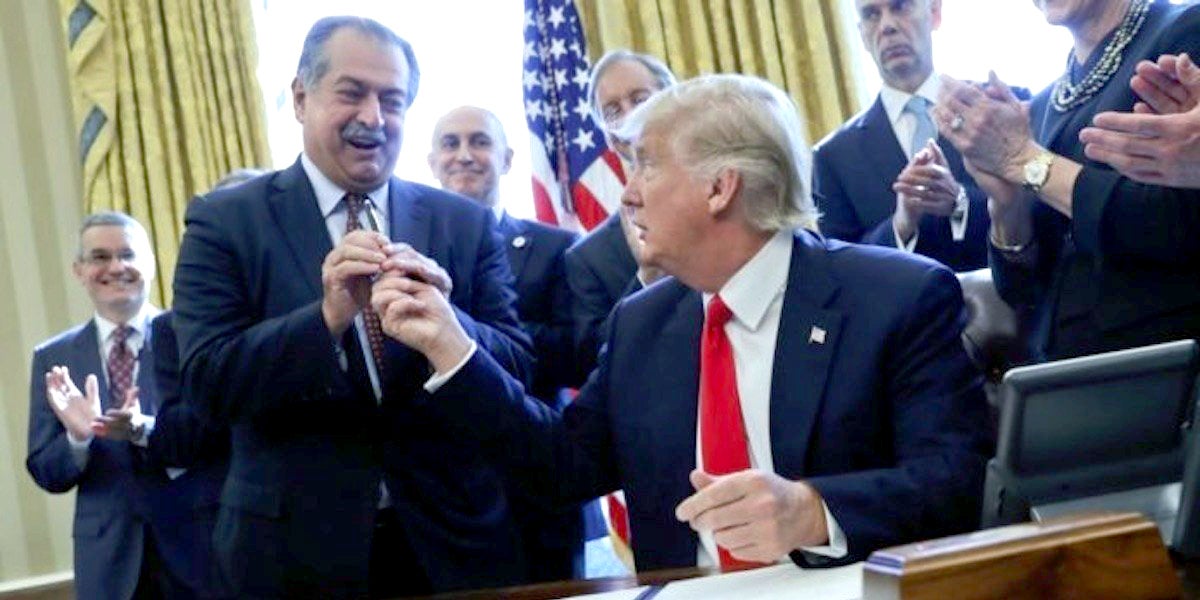 According to records obtained by the
Associated Press, the EPA boss met with Liveris for about 30 minutes at a Houston hotel on March 9. Later that month, Pruitt announced that he would no longer pursue a ban on chlorpyrifos from being used on food, ignoring his agency’s own review that even small amounts of the pesticide could impact fetus and infant brain development.

But EPA spokeswoman Liz Bowman insisted to the AP that Pruitt and Liveris were only “briefly introduced” at the energy industry conference where both men were featured speakers.

“They did not discuss chlorpyrifos,” the spokeswoman said. “During the same trip he also met with the Canadian minister of natural resources, and CEOs and executives from other companies attending the trade show.”

According to the AP, Pruitt also attended a larger group meeting with two other Dow executives, but Bowman said they did not discuss the pesticide.

“The move adds to the
Trump administration’s growing roster of decisions informed by ‘alternative facts,'” the NRDC’s Nicole Greenfield wrote in a blog post about the lawsuit. “Nearly two decades’ worth of scientific studies—including analyses by Pruitt’s own agency—have documented the numerous risks this bug-killer poses to children and pregnant women.”

The American Academy of Pediatrics also sent a letter to Pruitt on Tuesday, urging the EPA to ban the pesticide and called the agency’s decision to allow its use a threat to children’s health.

A lot has been reported about Dow’s seemingly close ties with Trump. The company
donated $1 million to the presidential inauguration. Additionally, Liveris leads President Trump’s advisory council on manufacturing. In February, Liveris received Trump’s pen after he signed the “Enforcing the Regulatory Reform Agenda” executive order aimed at eliminating regulations that the administration claims are damaging to the U.S. economy, but some worry that the measure will roll back critical environmental protections.

The
Associated Press reported in April that Dow is pressuring the Trump administration to throw out a 10,000-page government risk study on three pesticides under review, including chlorpyrifos. The government scientists found that chlorpyrifos is “likely to adversely affect” 1,778 of the 1,835 animals and plants in its study.

According to the Sierra Club, this is just the latest in a long list of examples of the Trump administration working with corporate polluters before reversing public safeguards to protect families from corporate negligence: