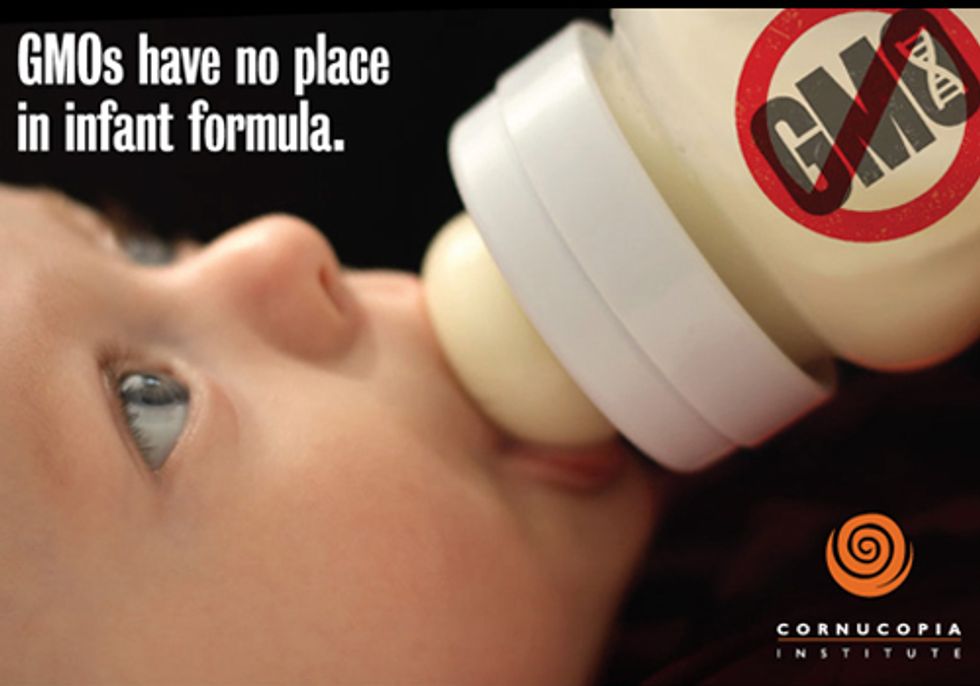 Shareholders of Abbott Laboratories will vote on whether the manufacturer of Similac, a leading brand of infant formula, should adopt a policy of sourcing ingredients that have not been genetically engineered.

The annual meeting, open to all owners of Abbott stock, takes place at Abbott Laboratories’ headquarters in Abbott Park, Illinois on April 26.

The Cornucopia Institute, a farm and food policy research group, joined As You Sow, a shareholder advocacy group that filed the resolution, in calling on Abbott Laboratories shareholders to vote yes on the resolution. Cornucopia recently launched a social media campaign, on Facebook and Twitter, and a petition drive.

"Based on the body of existing research, nobody should be eating GMO [genetically modified foods] foods, especially not babies," says Charlotte Vallaeys, policy director at Cornucopia Institute.

Many of the ingredients used in infant formula, especially soy-based formula, are derived from crops that have been genetically altered to internally produce pesticides or to be resistant to specific herbicides, so that weed killers that would normally kill or injure the plant can be sprayed more frequently and at higher doses. GMO foods that have been genetically engineered by Monsanto and other chemical manufacturers have not been adequately tested for long-term human health or environmental safety.

Consumers are increasingly expressing their discomfort with genetically engineered ingredients, as evidenced by the near-win of mandatory GMO labeling in California last year. The California citizen's initiative lost by a narrow margin despite corporate agribusiness and the biotechnology industry dumping over 46 million dollars in what proponents referred to as a 'corporate-funded misinformation campaign.'

"Parents are also increasingly voting in the marketplace and expressing their discomfort with genetically engineered products by choosing organic food for their children and families, including organic infant formula when breastfeeding is not an option," said Mark A. Kastel, co-director of the Wisconsin-based Cornucopia Institute. "Unfortunately, not every parent currently has the knowledge or financial wherewithal to choose organic formula for their babies, and every baby deserves to be protected from the potential effects of a GMO diet."

"Removing GMOs from nutritional products and infant formula in a timely manner has only upsides for Abbott," says Andrew Behar, CEO of As You Sow, the group that filed the shareholder resolution.

He added: "We believe that this is an opportunity to reduce risk to Abbott shareholders and to position the company for the changing consumer attitudes towards GMOs that will likely result in regulatory reform and create demand for non‐GMO crops in the U.S. It is an opportunity to lead on this important issue."