Tons of Plastic Trash Enter the Great Lakes Every Year – Where Does It Go? 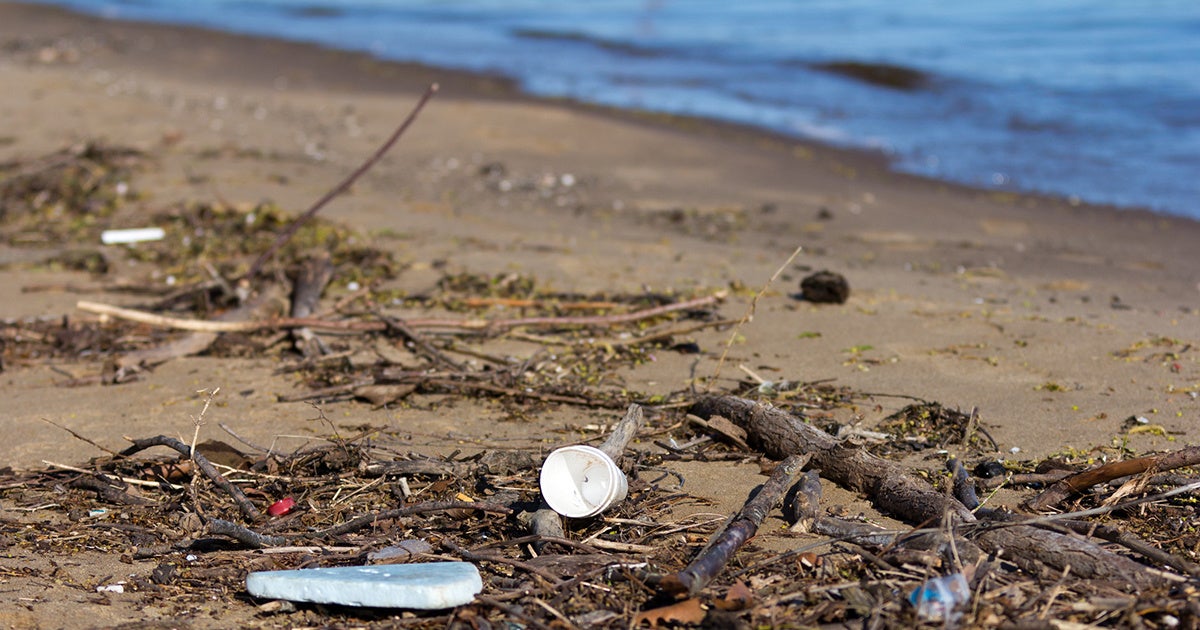 Awareness is rising worldwide about the scourge of ocean plastic pollution, from Earth Day 2018 events to the cover of National Geographic magazine. But few people realize that similar concentrations of plastic pollution are accumulating in lakes and rivers. One recent study found microplastic particles—fragments measuring less then five millimeters—in globally sourced tap water and beer brewed with water from the Great Lakes.

According to recent estimates, more than 8 million tons of plastic enter the oceans every year. Using that study’s calculations of how much plastic pollution per person enters the water in coastal regions, one of us (Matthew Hoffman) has estimated that around 10,000 tons of plastic enter the Great Lakes annually. Now we are analyzing where it accumulates and how it may affect aquatic life.

No Garbage Patches, but Lots of Scrap on Beaches

Plastic enters the Great Lakes in many ways. People on the shore and on boats throw litter in the water. Microplastic pollution also comes from wastewater treatment plants, stormwater and agricultural runoff. Some plastic fibers become airborne—possibly from clothing or building materials weathering outdoors—and are probably deposited into the lakes directly from the air.

Sampling natural water bodies for plastic particles is time-consuming and can be done on only a small fraction of any given river or lake. To augment actual sampling, researchers can use computational models to map how plastic pollution will move once it enters the water. In the ocean, these models show how plastic accumulates in particular locations around the globe, including the Arctic.

When plastic pollution was initially found in the Great Lakes, many observers feared that it could accumulate in large floating garbage patches, like those created by ocean currents. However, when we used our computational models to predict how plastic pollution would move around in the surface waters of Lake Erie, we found that temporary accumulation regions formed but did not persist as they do in the ocean. In Lake Erie and the other Great Lakes, strong winds break up the accumulation regions.

Subsequent simulations have also found no evidence for a Great Lakes garbage patch. Initially this seems like good news. But we know that a lot of plastic is entering the lakes. If it is not accumulating at their centers, where is it?

Using our models, we created maps that predict the average surface distribution of Great Lakes plastic pollution. They show that most of it ends up closer to shore. This helps to explain why so much plastic is found on Great Lakes beaches: In 2017 alone, volunteers with the Alliance for the Great Lakes collected more than 16 tons of plastic at beach cleanups. If more plastic is ending up near shore, where more wildlife is located and where we obtain our drinking water, is that really a better outcome than a garbage patch? 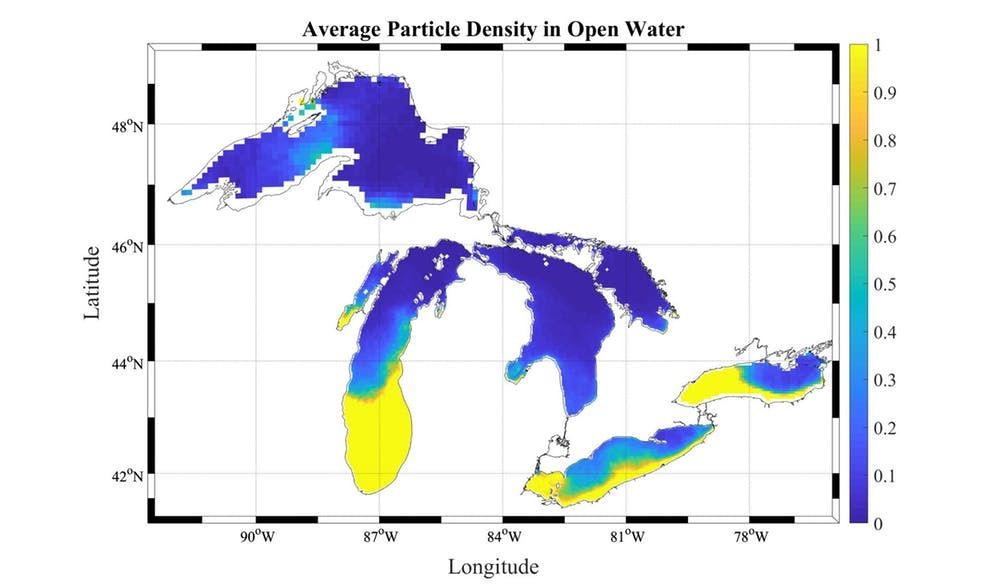 Average density of simulated particles in the Great Lakes from 2009-2014. Notice that there are no patches in the middle of the Lakes, but more of the particles are concentrated near the shores. Matthew Hoffman / CC BY-NC-ND

We estimate that over four tons of microplastic are floating in Lake Erie. This figure is only a small fraction of the approximately 2,500 tons of plastic that we estimate enter the Lake each year. Similarly, researchers have found that their estimates of how much plastic is floating at the ocean’s surface account for only around 1 percent of estimated input. Plastic pollution has adverse effects on many organisms, and to predict which ecosystems and organisms are most affected, it is essential to understand where it is going.

We have begun using more advanced computer models to map the three-dimensional distribution of plastic pollution in the Great Lakes. Assuming that plastic simply moves with currents, we see that a large proportion of it is predicted to sink to lake bottoms. Mapping plastic pollution this way begins to shed light on exposure risks for different species, based on where in the lake they live.

According to our initial simulations, much of the plastic is expected to sink. This prediction is supported by sediment samples collected from the bottom of the Great Lakes, which can contain high concentrations of plastic.

In a real lake, plastic does not just move with the current. It also can float or sink, based on its size and density. As a particle floats and is “weathered” by sun and waves, breaks into smaller particles, and becomes colonized by bacteria and other microorganisms, its ability to sink will change.

Better understanding of the processes that affect plastic transport will enable us to generate more accurate models of how it moves through the water. In addition, we know little so far about how plastic is removed from the water as it lands on the bottom or the beach, or is ingested by organisms.

Developing a complete picture of how plastic pollution travels through waterways, and which habitats are most at risk, is crucial for conceiving and testing possible solutions. If we can accurately track different types of plastic pollution after they enter the water, we can focus on the types that end up in sensitive habitats and predict their ultimate fate.

Of course, preventing plastic from entering our waterways in the first place is the best way to eliminate the problem. But by determining which plastics are more toxic and also more likely to come into contact with sensitive organisms, or end up in our water supply, we can target the “worst of the worst.” With this information, government agencies and conservation groups can develop specific community education programs, target cleanup efforts and work with industries to develop alternatives to products that contain these materials.