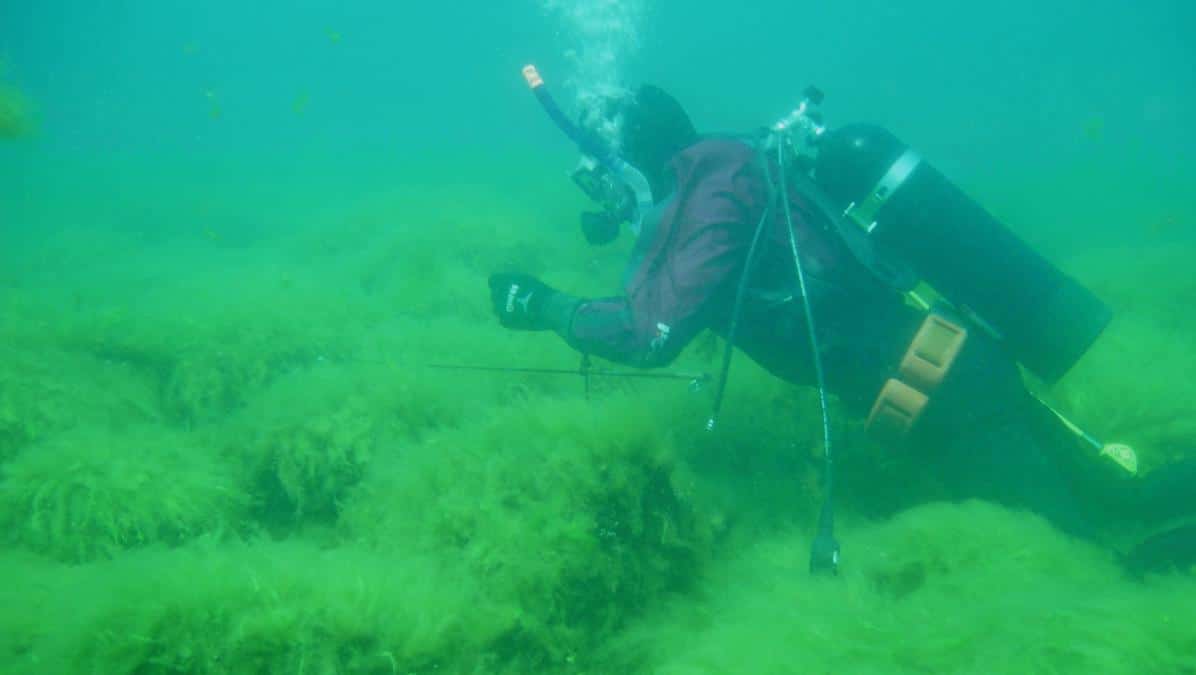 One type of algae in the Great Lakes, Cladophora, readily tangles up with plastic microfiber. Brenda Lafrancois / National Park Service

Researchers found that one type of algae, which has greatly expanded its range within the Great Lakes and is one of the most abundant algae by weight there, could catch up to one trillion pieces of microplastic in the Great Lakes.

“It’s just a massive amount of these microscopic particle pollutants that are now part of our environment,” Julie Peller, a professor of chemistry at Valparaiso University whose recent research revealed the microplastics-algae dynamic, told EHN.

Peller and colleagues say the study may offer insight into how we can stop the microplastic pollution — any plastic debris less than five millimeters long — from getting into the lakes. However, in the meantime, algae are often used as shelter for freshwater species at the bottom of the food chain, so the findings suggest that these microplastic hiding spots could be contaminating Great Lakes fish — and the people that eat them.

There are a lot of microplastics in the Great Lakes, one of the world’s largest freshwater ecosystems and the drinking water source for 30 million people. While less well understood than ocean plastics, the tiny bits of plastic are pretty much ubiquitous throughout the five lakes. Research shows they’re in tap water and beer brewed with water from the Great Lakes. Surface water samples show huge numbers of microplastics, but statistical models always predict more microplastics are in the lakes than are found by sampling.

Finding them in algae helps close some of that gap.

“I think that we found one of those reservoirs where some of the microplastics have been, for lack of a better word, hiding,” said Peller, whose recently published study in Environmental Pollution documented the close interactions between algae and microplastics.

This study examined the most abundant group of algae in the Great Lakes: Cladophora. Cladophora, which looks a bit like green hair, readily tangles up with plastic microfibers, which are shed from synthetic clothing, carpets, and other cloth.

Nearly every penny-sized sample of Cladophora collected from the lakes contained at least one microfiber, Peller said. Even samples from apparently pristine locations, like near Sleeping Bear Dunes National Lakeshore in the northwest corner of Michigan’s Lower Peninsula, contained microplastics.

Peller’s team also took clean, living Cladophora samples and added plastic microfibers to them. Plastic microfibers quickly adhered to the algae in a process called adsorption, in which two substances stick together because of a molecular attraction.

Synthetic fabrics shed microfibers when washed, so microfibers are often most abundant near populous areas where they enter the environment through treated wastewater.

Even without special plastic screening technology, removing 90 percent of plastics is not only possible, but probable, Heng Zhang, the assistant director of monitoring and research at Metropolitan Water Reclamation District of Greater Chicago, told EHN. Studies of wastewater treatment plants around the world put the removal rate as high as 98 percent.

A main goal of wastewater treatment is removing particles of organic waste by screening and settling out waste into a sludge. Because microplastics tend to attach to these particles, like they do to algae, a lot of it is captured by processes designed before microplastic pollution started gaining attention.

“I have to admit, it wasn’t designed. It just happened by chance or by nature or the characteristics of the stuff,” Zhang said.

Removal rates of 90 percent or higher still leave a lot of microplastics in the Great Lakes. Some researchers estimate 10,000 metric tons (or about 11,000 tons) of plastic pollution enters the Great Lakes each year.

But regulation will likely dictate when new microplastic removal technology is developed.

“I don’t see any EPA guidelines that says we need to start looking at the technology to remove that,” Zhang said. “It looks like microplastics is down to the very end of the priority list.”

Until then, wastewater treatment plants are likely to focus on other areas, Zhang said.

If or when microplastics become a focus of wastewater treatment it makes sense to “start with what has worked,” Zhang wrote in a follow-up email. There would still be questions to answer about efficacy, cost and consequences — such as safe disposal after microplastic is collected.

Plastics at the Base of the Food Web

Cladophora is a genus of freshwater algae that has increased in the Great Lakes with the arrival of invasive mussels. Filter-feeding zebra and quagga mussels have spread throughout the Great Lakes basin, sucking light-blocking algae and plankton out of the water. As the water cleared and sunlight could reach greater depths, Cladophora expanded its range to deeper waters.

Cladophora is different from the toxic blue-green algae that has caused problems for some Great Lakes water supplies. But there’s so much of it now it’s become a nuisance, Meredith Nevers, a research ecologist for the U.S. Geological Survey and a co-author of the new study, told EHN.

The sheer amount of long, stringy Cladophora in the lakes — up to 129,000 tons, according to one estimate — means it’s likely playing a significant role in microplastic’s fate in the Great Lakes.

“If there are microfibers and microplastics in the lake, there’s no question they’re going to get tangled up in filaments of algae,” Nevers said.

Great Lakes fish don’t eat Cladophora, but it provides shelter for zooplankton and other invertebrates, which are a major food source for some prey fish. The mingling of microplastics with natural fish food could be one entry point for microplastics into the food chain. Further, by catching microplastics, algae may be keeping them suspended in the water for longer where they’re more likely to be eaten.

“It wouldn’t surprise me to have microplastics enter food webs through the invertebrates that live in and graze on Cladophora,” Eric Hellquist wrote in an email to EHN. Hellquist is a professor of biological sciences at State University of New York Oswego.

Once microplastics enter a food chain, they can make their way up to fish species that humans eat, research shows.

Hellquist and his students surveyed prey fish — such as alewife, sculpin, and invasive round gobies — in Lake Ontario and found that 97 percent of 330 fish had microfibers in their digestive tracts. The majority of microplastics found were microfibers, he said.

Research suggests that fish consumption could be one way that microplastics get into people.

The study of microplastics in the Great Lakes is still a relatively young field and a lot of questions need to be answered.

One thing is clear: the amount of microplastics in the Great Lakes is huge.

“It’s hard to think about because it’s so large,” Peller said.

However, Peller thinks the stickiness of algae might inspire better removal technology.

“I think that a lot of times when we look for solutions to problems that we as humans have created, we often find a lot of insight into nature’s natural mechanism for cleansing itself,” she said.