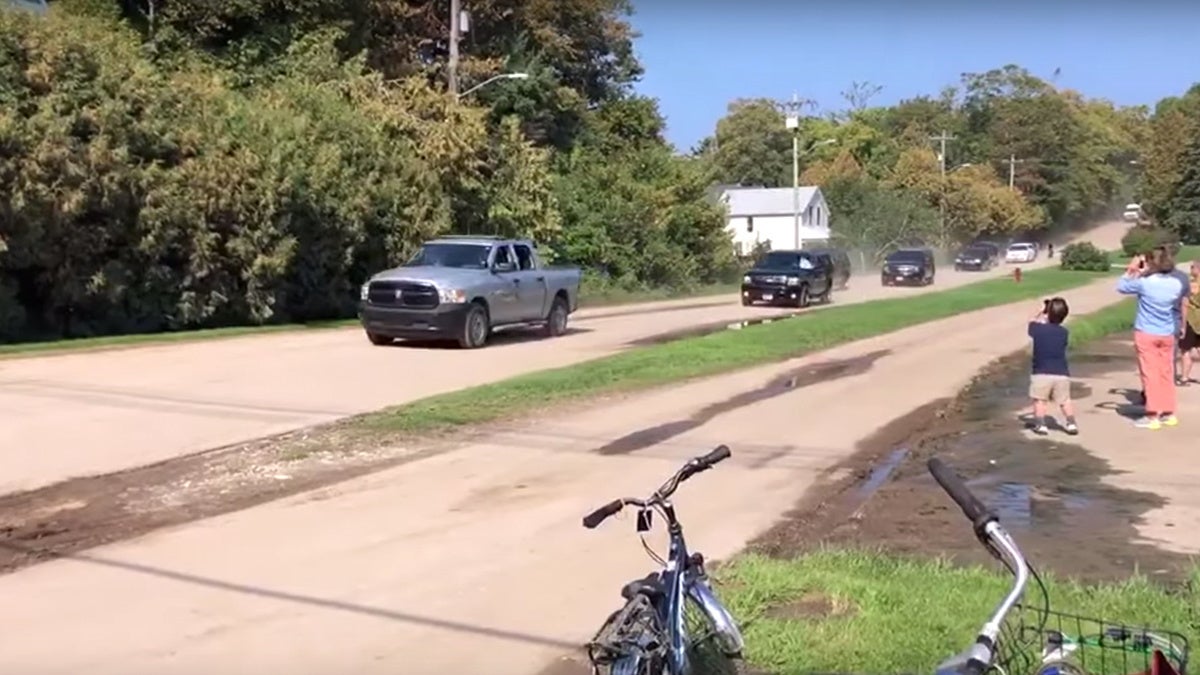 Mike Pence brought the first motorcade to Mackinac Island on Saturday. Cars have been banned on the island since 1898. 13 ON YOUR SIDE / YouTube screenshot

Vice President Mike Pence sparked outrage on social media Saturday when he traveled in the first-ever motorcade to drive down the streets of Michigan’s car-free Mackinac Island, HuffPost reported.

Pence, who traveled to the island for the Mackinac Republican Leadership Conference, was the first sitting vice president to ever visit the island, according to the Detroit Free Press. However, former presidents Harry Truman, John F. Kennedy, Gerald Ford, George H.W. Bush and Bill Clinton all visited the island while respecting its 121-year prohibition on cars, according to HuffPost. Ford, the only sitting president to visit the island, rode around in a horse-drawn carriage, though the secret service did stash a car on the island in case of an emergency.

“This video of the cars driving on our beautiful #MackinacIsland makes my stomach turn,” Rep. Rashida Tlaib (D-Mich.) tweeted.

Pence landed on the island by helicopter and then took the eight-car motorcade to and from the hotel where the conference was held, according to the Detroit Free Press.

Some, including the ferry service that transported the vehicles to the island, defended Pence’s actions on security grounds.

“Regardless of your political views, we hope you’ll understand the logistical intricacies involved in securing our leaders while visiting,” Shepler’s Ferry wrote on Twitter, as Michigan Live reported. “We were happy to assist.”

“It’s both the existence and size,” Fournier told the Detroit Free Press. “No security expert would claim it’s necessary.”

Mackinac Island’s ban on cars dates back to the nineteenth century, as The New York Times explained:

At the dawn of the automobile era, many small communities were concerned that noisy, smelly newfangled automobiles would scare the horses that most people depended upon, and the village of Mackinac was no exception. The village council resolved on July 6, 1898, that “the running of horseless carriages be prohibited within the limits of the village.” One resident was quoted as referring to cars as “mechanical monsters.”

Most of the rest of the island is state parkland, and the Mackinac Island State Park Commission followed suit in 1901, imposing a ban after Earl C. Anthony, a “summer cottager” who brought a car to the island, scared and injured some horses and several carriages were damaged.

In Washington, DC, residents were encouraged to pledge to ditch their cars for any or all days from Sept. 21 to 23.

“Car Free Day is organized in various cities throughout the world in different ways, but with the common goal of reducing the number of cars on the streets. The benefit to greater society is a day with less traffic congestion, a greener environment and reduced gasoline demand,” Car Free Metro DC explained.

Switching from private car use to public transit alternatives can combat both air pollution and the climate crisis, the UN Environment Programme explained.