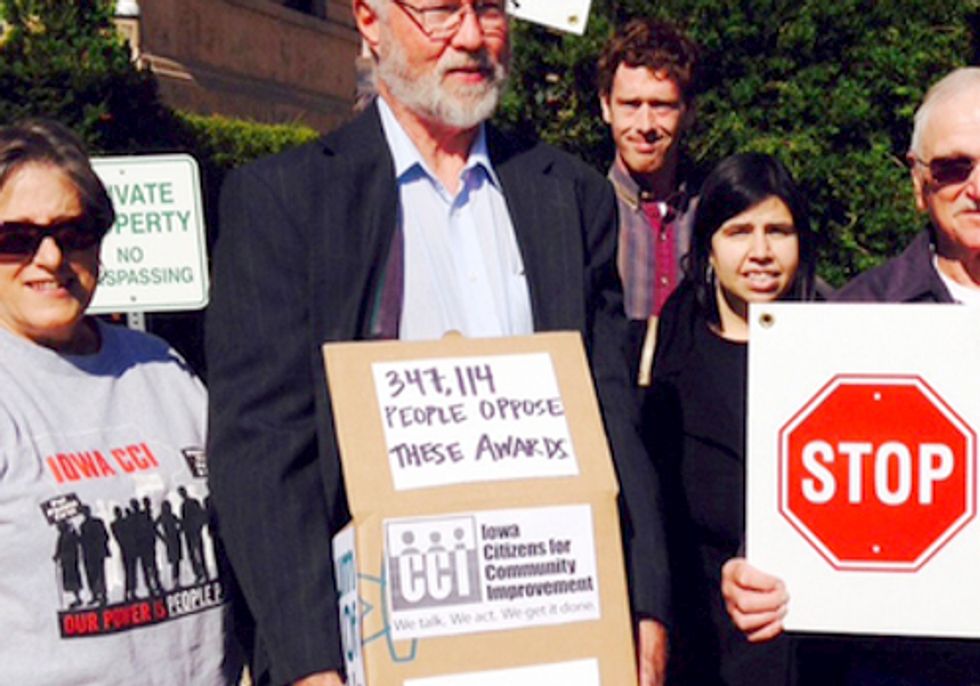 Petitions signed by more than 345,000 people were delivered to the World Food Prize headquarters Thursday opposing the awarding of this year's prize to top researchers from agrichemical giants Monsanto and Syngenta whose contributions led to the development of genetically engineered (GE) crops.

The prize, awarded Thursday, is part of the annual World Food Day celebrations and is considered the foremost prize in agriculture. The World Food Prize goal is to recognize "the achievements of individuals who have advanced human development by improving the quality, quantity or availability of food in the world."

The Center for Food Safety, Iowa Citizens for Community Improvement, Pesticide Action Network North America and other groups delivered a petition signed by more than 345,000 people opposed to genetically engineered (GE) crops. The petition delivery kicked off a four-hour vigil in front of the World Food Prize Foundation headquarters in Iowa.

“With this award, the World Food Prize is perpetuating the false notion that genetically engineered crops are a solution to world hunger and malnutrition," said Andrew Kimbrell, executive director for Center for Food Safety. "This kind of biotech propaganda obscures the huge potential of low-cost agricultural techniques that actually increase food production and alleviate hunger. Awarding the World Food Prize to these biotech giants only serves to divert attention from these truly nutritious and sustainable approaches.”

The high cost of GE seeds and chemicals, along with uncertain crop yields, make GE crops a poor choice for farmers, particularly in the developing world, said a joint project between the United Nations and the World Bank. African scientists representing many of the nations affected by poverty and hunger say GE crops undermine the nations’ capacities to feed themselves by destroying established diversity, local knowledge and sustainable agricultural systems, the Center for Food Safety said.

"My hope is this will put to rest the misguided opposition" to the crops, Chilton said after receiving the award. She called genetically modified organisms a "wonderful tool" in the fight against hunger.

The Union of Concerned Scientists said Thursday that while the scientists have made valuable scientific discoveries, the biotechnology companies grossly overhype genetic engineering’s ability.

Further, Monsanto and other agricultural companies are generous sponsors of the World Food Prize—including a $5 million donation from Monsanto—which creates a conflict of interest for company scientists who receive the prize, Union of Concerned Scientists said.