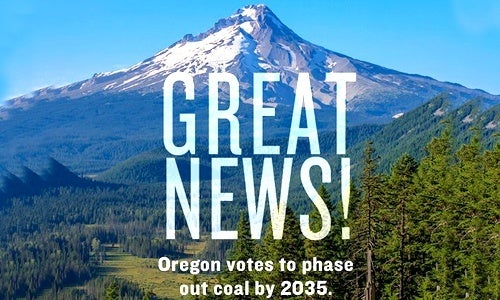 Oregon just became the first state to pass legislation to get off of coal and double down on renewable energy instead. The Oregon Legislature voted Wednesday to eliminate coal generation from the state’s future and committed its largest utilities to supply at least half of their electricity from renewable resources by 2040.

Combined with Oregon’s existing hydroelectric base, that means the state will be on track for an electricity system that’s 70 to 90 percent carbon-free by that date. The legislation will make Oregon’s energy among the cleanest in the country and puts the state in the growing top tier of renewable energy standards, along with California, New York and Hawaii.

The Clean Energy and Coal Transition Act that received final approval yesterday prevailed with bipartisan support because, as explained in this previous blog, stopping dirty coal deliveries into Oregon will cut off the market for coal plants and open up the state to more wind and solar power, just as the costs for those emissions-free resources are dropping dramatically.

Under the bill that gained final passage by the Senate yesterday, Oregonians will no longer have to pay for any coal power by 2035, at the latest. This legislation, which Gov. Kate Brown is expected to sign in the coming weeks, will drastically clean up the energy Oregonians use and eliminate the need for new large gas combustion turbines as old coal plants go the way of the dinosaurs.

Cleaning up its electricity grid will also help Oregon clean up its carbon emissions from transportation by converting the gasoline and diesel-powered vehicles on Oregon’s roadways to electric cars and trucks and plugging them into its low-carbon grid. The legislation directs utilities to propose significant investments to accelerate the deployment of charging stations for electric cars, trucks and buses in a manner that also supports integrating renewable power onto the electric grid.

Oregon’s new clean energy future was charted by unique coalition—not the usual environmentalists vs. utilities, but true consensus: regional and national environmental groups worked with the two largest electric utilities in Oregon—Portland General Electric and Pacific Power—and the state’s utility consumer advocate. Each had good reasons to support the bill. Environmentalists will get a long-term strategy to clean Oregon’s energy mix. The utilities, which import coal electricity from power plants in Montana, Wyoming and Utah, gained an assured pathway, allowing them to plan and invest for a stable and affordable power supply, which also is important in planning their compliance across the region with the U.S. Environmental Protection Agency’s (EPA) Clean Power Plan to limit power plant emissions. Although the U.S. Supreme Court temporarily blocked the Obama administration’s plan to fight climate change by cutting the emissions fueling it, Oregon’s action is further proof that climate action can—and must—continue.

Meanwhile, the consumer advocate, the Citizens’ Utility Board, was able to ensure that Oregon customers would not have to pay to keep aging coal plants puffing and sputtering along indefinitely. Reducing the amount of electricity generated by burning coal also will help avoid the worst effects of climate change—which could have huge financial and health costs to households in the state. If we needed another reminder of the risks of failure, just last week there was news that sea levels were rising faster than at any time in the last 2,800 years; and that this effect, as so many others, is traceable directly back to ballooning carbon emissions.

Oregon’s commitment to a clean energy future—added to other promises made by states and cities across America and complemented by strong EPA actions—are critical to making real the Paris commitments to cut carbon emissions as promised by 187 nations earlier this year.

Worth noting in this respect, for those who think cutting carbon is a purely American or northwestern concern: China’s carbon emissions appear to have fallen again in 2015, for the second straight year, reflecting a two-year drop in that country’s coal combustion that is equal to all of Japan’s coal consumption. At the same time, China brought 32.5 megawatts of new wind and 18.3 megawatts of new solar online in 2015, both records.

Commitments add up; commitments persuade. Commitments like Oregon’s are essential to the global effort to contain and reduce carbon dioxide emissions to levels that can protect the Earth for future generations.