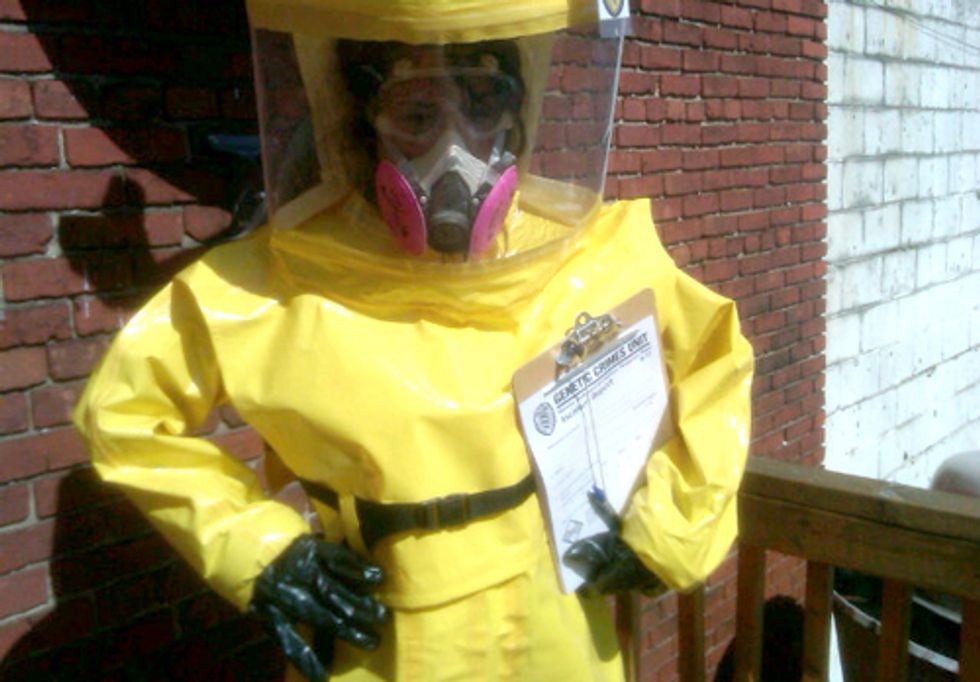 Today, Occupy Monsanto’s agents of change with the Genetic Crimes Unit (GCU), a group designed to protect America from genetically modified foods, will wear bio-hazmat suits when they visit Congress. The group will gather at Capitol South Metro station at noon on March 16 to highlight how chemical company Monsanto is contaminating the political process. The GCU opposes Monsanto’s bid to increase spraying of food with toxic weed killers like 2,4 D (the main ingredient in Agent Orange), genetic contamination of the organic food supply, and other risks associated with genetically modified food (GMOs).

The GCU will arrive at the metro station wearing bio-hazmat suits to assess whether Members of Congress and their staff have been victims of genetic crimes. The GCU will hold a banner that reads, “Congress is Genetically Modified,” as they circulate on Capitol Hill sidewalks. This day of action is part of a larger international call to ‘Occupy Monsanto’ taking place all over the globe, including Spain, Africa, New Zealand, Australia, Canada and at least 28 cities throughout the U.S.

“In the name of Wall Street profits, chemical corporations such as Monsanto genetically engineer crops to withstand high doses of their toxic weed killers that contaminate our food and water, and have not been proven safe. We deserve to know what we are eating. Virtually every major country requires labeling of GMOs in foods so their citizens can make informed choices, including all of Europe, Japan and even China,” said GCU’s Ariel Vegosen. “Monsanto’s lobbying dollars are pouring into politicians, so its clear we have a GMO contaminated U.S. Congress that threatens our health and the health of the planet,” said Vegosen.

Congressman Dennis Kucinich (D-OH) has introduced three bills addressing concerns with GMOs. In addition, more than 900,000 people have signed onto the JustLabelit.org citizens’ petition to the Food and Drug Administration for GMO labeling (the most to sign a Food & Drug Administration petition ever). Last fall, about 100 people marched in the Right2Know March from New York to the White House to demand President Obama keep his campaign promise to label GMO foods. Video of the promise can be seen by clicking here. In California, Monsanto faces a 2012 ballot proposition on GMO labeling. Finally, on September 17, 2012, Occupy Monsanto is calling for hundreds of actions internationally.