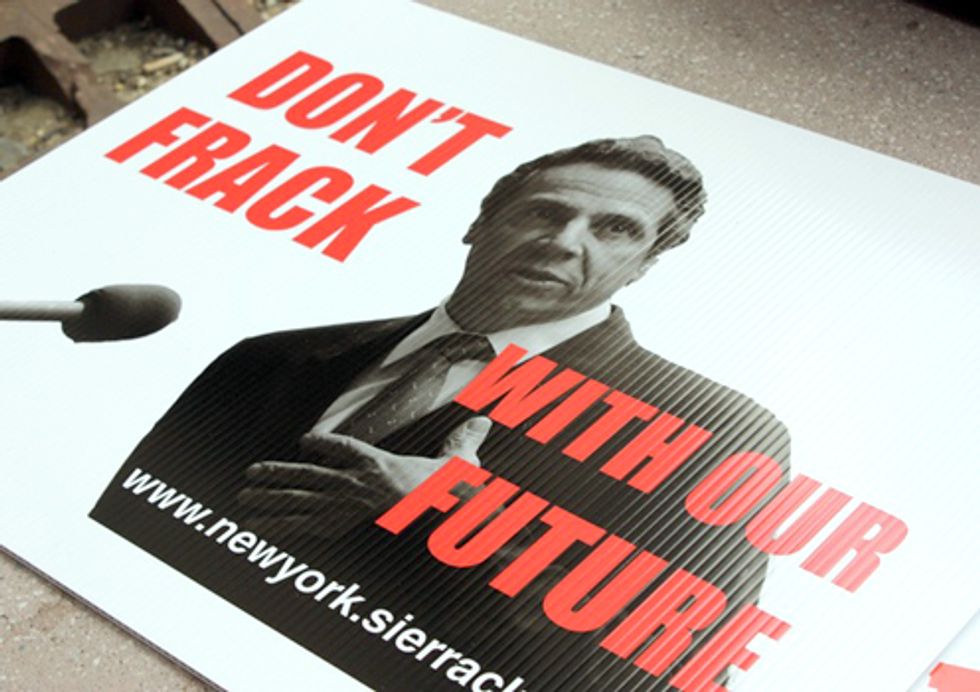 New York regulators granted natural gas industry representatives exclusive access to shale gas drilling regulations as early as six weeks before they were made public, according to documents obtained by Environmental Working Group (EWG) through requests filed under the New York state Freedom of Information Law.

In at least one instance, a representative of Oklahoma-based Chesapeake Energy Corp., one of the nation’s most powerful drilling companies, used this exclusive access to try to weaken rules restricting discharges of radioactive wastewater.

"This is like giving the drilling industry three laps around the track while everyone else was left waiting on the starting block," said Thomas Cluderay, EWG assistant general counsel. "The public needs to know whether New York regulators compromised the integrity of the state’s drilling plan months ago, despite promises of keeping the process fair and transparent."

The New York State Department of Environmental Conservation, known as the DEC, published a 1,500-page environmental impact statement on horizontal drilling and high-volume hydraulic fracturing on Sept. 7 and corresponding draft regulations on Sept. 28. If adopted, the DEC’s regulatory scheme could allow 50,000 gas wells in New York’s portion of the Marcellus Shale, a vast underground formation that stretches along the Appalachian chain as far south as Kentucky. Gov. Andrew Cuomo, (D-NY), told Albany radio station WGDJ he will decide “shortly” whether to proceed with this plan.

Cuomo has promised to “let the science and the facts make the determination, not emotion and not politics” in making his decision on drilling for shale gas in the Empire State. However, the DEC, on which Cuomo is relying for scientific analysis, has issued a drilling plan riddled with scientific flaws, identified in a recent report by EWG and New York-based Physicians, Scientists and Engineers for Healthy Energy.

A series of emails exchanged between August and September of last year show that DEC officials shared key details of proposed natural gas drilling regulations exclusively with drilling industry representatives before they were made available to the general public. The DEC did not share the documents with any other stakeholders, including environmental representatives on an advisory panel that DEC Commissioner Joe Martens appointed last July to study high-volume hydraulic fracturing. This exclusive access gave the drilling industry an advance opportunity to lobby administration officials to weaken the regulations.

In one instance, Thomas West, a prominent Albany attorney for drilling companies, including Chesapeake, the nation's second-leading natural gas producer, wrote regulators to make “one last pitch” before the wording of a draft stormwater permit was released to the public. West proposed to “reduce or eliminate radionuclide testing” of fluids that storms could wash from drilling sites into surrounding waters and soil.

Wastewater produced by shale gas drilling can contain extremely high concentrations of naturally occurring radionuclides, a type of carcinogenic radioactive pollution. The strictness or laxity of the stormwater permit process is critical to New York’s water supplies because drilling for shale gas could occur near communities devastated by flooding several times in the past decade. Heavy rain in these areas could channel wastewater bearing radioactive contaminants and other drilling pollution into public water sources.

Because drilling industry representatives were the only stakeholders to see the draft regulatory language before it was published on Sept. 28, EWG cannot determine whether West’s “pitch” caused the DEC to soften its approach to the issue of radioactive pollution.

The Sept. 28 version of the stormwater permit requires testing for radioactive contaminants but, importantly, does not propose penalties for drilling companies whose runoff shows radioactivity at a level of concern for public health. In fact, the permit does not even specify what level the DEC considers unsafe.

In another case, West urged regulators to avoid “duplication” and added “since the unnecessary duplication of efforts by state agencies is a theme of the Cuomo administration, you should expect comments from our group to that effect as part of our official comments.”

Glaring holes in DEC documents disclosed to EWG in response to its Freedom of Information Law requests raise questions about whether the drilling industry received even more exclusive chances to influence New York’s drilling plan.

The emails also show that the industry assumed it would receive more information from the DEC. “Steve, I thought that we were going to get this information long-ago,” West wrote to Steven Russo, DEC general counsel, on Sept. 22, referring to internal DEC mapping data. The governor’s office released even fewer records than the DEC pursuant to EWG’s requests.

EWG plans to file additional Freedom of Information Law requests with the Cuomo administration to shed more light on the state’s collaboration with the drilling industry.

A full report with timeline of emails exchanged is available online.