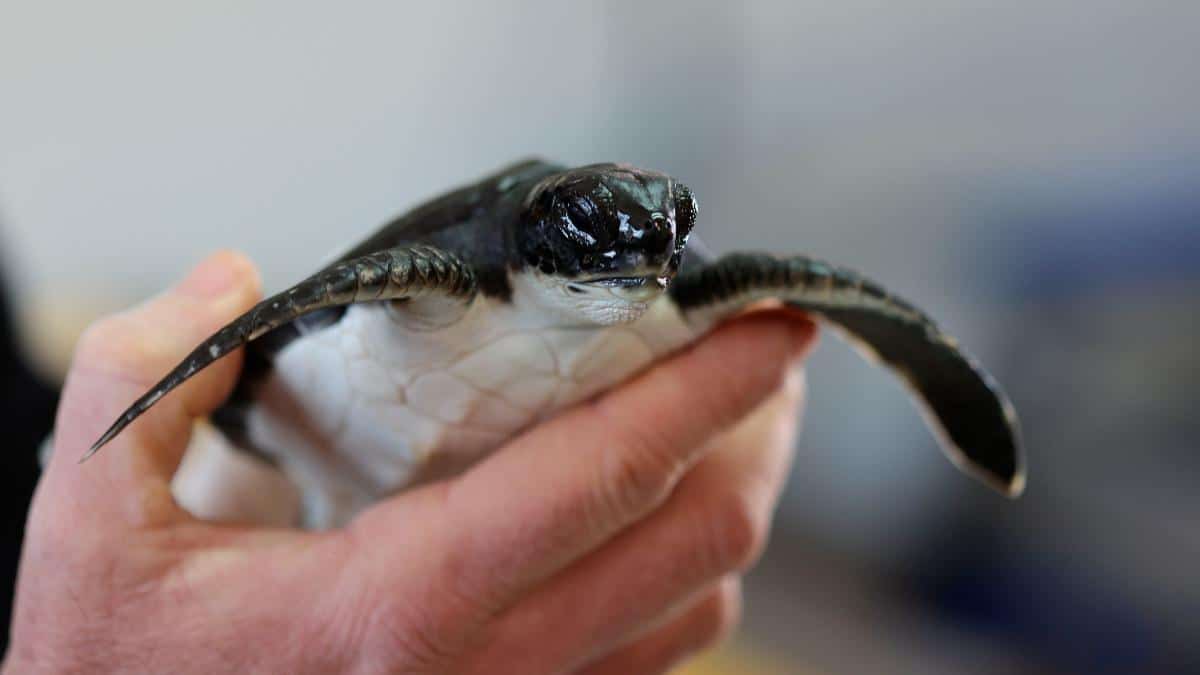 The condiment can both help break down the tar that has coated even the turtles’ insides and clean out their system, Guy Ivgy, a medical assistant at the National Sea Turtle Rescue Center in Michmoret, explained to The Associated Press.

“They came to us full of tar. All their trachea from inside and outside was full of tar,” he said.

Tar from a mysterious oil spill began washing up on Israeli beaches last week, as EcoWatch reported previously. The spill is being called one of the worst ecological disasters in the nation’s history, and has now covered most of Israel’s 120 miles of coastline along the Mediterranean, according to The Associated Press. It has now also spread to the coastline of Lebanon.

The spill has generated around 1,000 tons of tar, which has seriously affected wildlife, including sea turtles. The injured turtles have been taken to the National Sea Turtle Rescue Center, which is north of Tel Aviv. Ivgy told The Associated Press Tuesday that the center was currently treating 11 turtles. Yaniv Levy, the center’s founder and director, told Haaretz the same day that the center was treating 27 turtles total and six for tar damage specifically.

The tar-coated turtles have to be cleaned both inside and out, Levy explained.

“They all got here with a coat of tar on their heads, and in their eyes, nostrils, mouth, digestive system and stomach,” he said. “With this kind of damage they have no chance to survive without treatment. We removed the tar from their nostrils and eyes so they could breathe and see.”

The mayonnaise helps clean the digestive system. First, volunteers use vegetable oil to thin the tar. Then, they use mayonnaise to dilute the tar and remove it from the stomach and intestinal lining. At the same time, the mayonnaise provides fats and proteins to the turtles while it is not safe for them to eat solid food.

“If they eat regular food, it turns into a lump with the tar and could cause blockages, which is why we don’t give them solid foods during the first days,” Levy said.

At this Israeli turtles hospital, oil spill victims are saved with Q-tips and mayonnaise
https://t.co/XrmHbKrmHu pic.twitter.com/bmmlcY4wTJ

This isn’t the first time mayonnaise has been used to treat sea turtles rescued from an oil spill. The Turtle Hospital in Florida also recommends it as a safe and effective treatment, according to BBC News.

Mayonnaise is an effective treatment because of its unique properties, Live Science explained. That is because it is an emulsion, a mixture of two liquids that don’t usually mix, in this case oil and water. The egg yolks in mayonnaise contain both water and lecithin, a molecule that is hydrophilic (water-attracting) on one side and hydrophobic (water-repelling) on the other. That means that, when the yolks are combined with acid (usually lemon juice or vinegar) and oil to make mayonnaise, the oil sticks to the hydrophobic sides of the lecithin molecules, and the hydrophilic sides stick out, sticking to the water and preventing it from separating from the oil.

Live Science explained why this is good news for tar-coated turtles:

Because mayonnaise has both hydrophobic and hydrophilic properties, it can interact with both the oily, hydrophobic tar and hydrophilic molecules in a turtle’s digestive tract. The hydrophobic oil can mix with the tar, making it thinner and less viscous; meanwhile, the hydrophobic ends of the lecithin molecules are also drawn towards the tar, with their hydrophilic ends facing out. This creates a barrier around the tar that better interacts with water, making the toxic substance less sticky.

In Israel, the treatment appears to be working. Levy told Haaretz he thought the turtles in his care would be ready to be released in a month or two.

“A little more mayonnaise and they’ll all recover and get back to natural food,” he said.