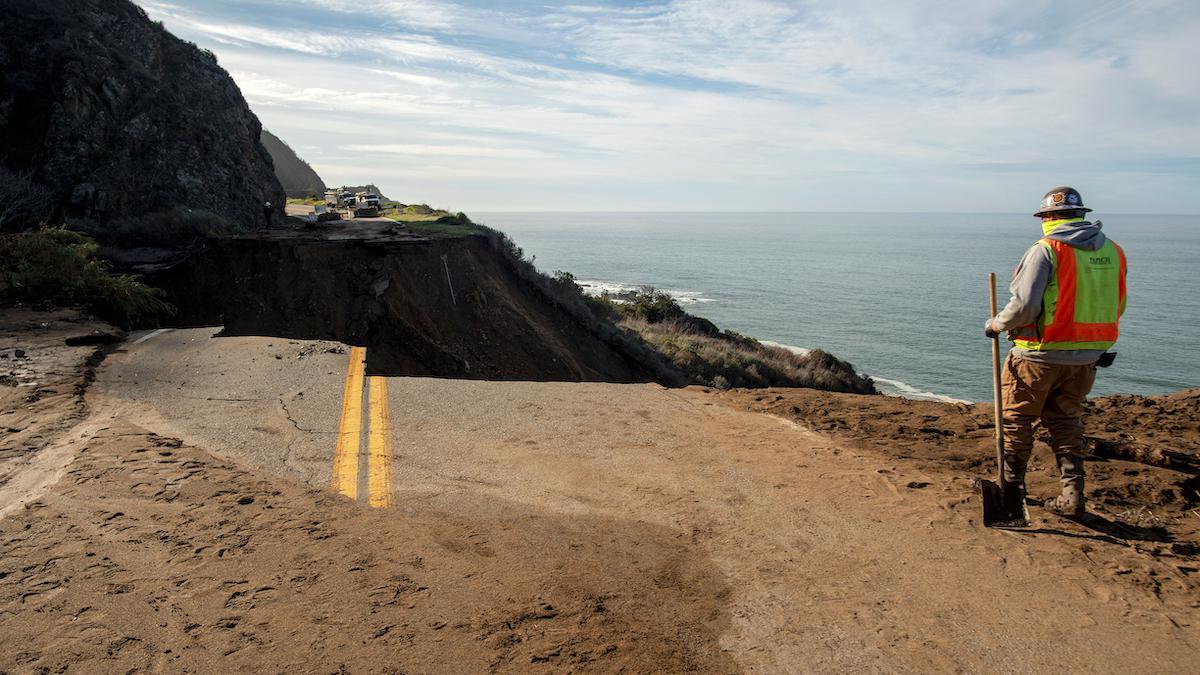 A section of Highway 1 collapsed into the Pacific Ocean near Big Sur, California on Jan. 31, 2021, after heavy rains and debris of trees, boulders and mud. A new bill notes that "climate-related natural disasters have increased exponentially over the past decade." JOSH EDELSON / AFP via Getty Images

In a sign that some members of Congress intend to hold President Joe Biden accountable for climate promises he made as a candidate, three lawmakers on Thursday introduced a bill directing him to declare a national climate emergency and mobilize every resource available to halt, reverse, mitigate, and prepare for this crisis.

Reps. Earl Blumenauer (D-Ore.) and Alexandria Ocasio-Cortez (D-N.Y.) joined with Sen. Bernie Sanders (I-Vt.) to spearhead the National Climate Emergency Act of 2021 — which builds on a climate emergency resolution demanding a national mobilization that the trio introduced in the last congressional session.

“Scientists and experts are clear, this is a climate emergency and we need to take action,” Blumenauer said in a statement. “Last Congress, I worked with Oregon environmental activists to draft a climate emergency resolution that captured the urgency of this moment.”

“President Biden has done an outstanding job of prioritizing climate in the first days of his administration, but after years of practiced ignorance from [former President Donald] Trump and congressional Republicans, an even larger mobilization is needed,” he added. “I am glad to work with Rep. Ocasio-Cortez and Sen. Sanders again on this effort, which takes our original resolution even further. It’s past time that a climate emergency is declared, and this bill can finally get it done.”

The National Climate Emergency Act that I introduced today with @AOC and @BernieSanders is the product of years of collaboration and work with Oregon environmental activists who continue to lead the way on bold climate action. #ClimateEmergencyNOWhttps://t.co/mSUe336wWd

Ocasio-Cortez — who also led the Green New Deal resolution with Sen. Ed Markey (D-Mass.) in the last session — noted Thursday that “we’ve made a lot of progress since we introduced this resolution two years ago, but now we have to meet the moment. We are out of time and excuses.”

The National Climate Emergency Act recognizes that 2010 to 2019 was the hottest decade on record, atmospheric concentrations of carbon dioxide and other pollutants have soared since pre-industrial times and are increasing at an alarming rate, and global temperature rise “is already having dangerous impacts on human populations and the environment.”

“Climate-related natural disasters have increased exponentially over the past decade,” the bill notes, “costing the United States more than double the long-term average during the period of 2014 through 2018, with total costs of natural disasters during that period of approximately 0,000,000,000 per year.”

“Individuals and families on the frontlines of climate change across the United States, including territories, living with income inequality and poverty, institutional racism, inequity on the basis of gender and sexual orientation, poor infrastructure, and lack of access to healthcare, housing, clean water, and food security are often in close proximity to environmental stressors or sources of pollution, particularly communities of color, Indigenous communities, and low-income communities,” the bill says.

These communities, the bill continues, “are often the first exposed to the impacts of climate change; experience outsized risk because of the close proximity of the community to environmental hazards and stressors, in addition to collocation with waste and other sources of pollution; and have the fewest resources to mitigate those impacts or to relocate, which will exacerbate preexisting challenges.”

As Ocasio-Cortez put it: “Our country is in crisis and, to address it, we will have to mobilize our social and economic resources on a massive scale. If we want to want to avoid repeating the mistakes of the past — if we want to ensure that our nation has an equitable economic recovery and prevent yet another life-altering crisis — then we have to start by calling this moment what it is, a national emergency.”

The congresswoman’s comments echoed months of calls from campaigners across the globe for a just, green recovery from the ongoing coronavirus pandemic. Bolstering those calls, a recent United Nations report shows that while the world is on track for a temperature rise beyond 3°C this century, such a recovery could cut projected greenhouse gas emissions for the next decade by about a quarter.

The new legislation requires the president to deliver a report within one year of the bill’s enactment, and continue the practice annually, detailing the executive branch’s actions to address the climate emergency and ensure a habitable planet for future generations. The bill urges the pursuit of major mitigation and resiliency projects, including building and infrastructure upgrades, investments in public health and regenerative agriculture, and protections for public lands.

The legislation highlights that the United States is a primary driver of climate change, underscoring its responsibility to mobilize a response not only at home but around the world — particularly in frontline communities that have contributed least to the crisis but are already dealing with its consequences.

The bill also points out that “according to climate scientists, addressing the climate emergency will require an economically just phase-out of the use of oil, gas, and coal in order to keep the carbon that is the primary constituent of fossil fuels in the ground and out of the atmosphere.”

Sanders, who now chairs the Senate Budget Committee, declared that “as we face the global crisis of climate change, in addition to other crises we face, it is imperative that the United States lead the world in transforming our energy system away from fossil fuel to energy efficiency and sustainable energy.”

“What we need now is congressional leadership to stand up to the fossil fuel industry and tell them that their short-term profits are not more important than the future of the planet,” Sanders added. “Climate change is a national emergency, and I am proud to be introducing this legislation with my House and Senate colleagues.”

Thank you to @repblumenauer, @AOC, and @SenSanders for your continuing support for an emergency-speed, national climate mobilization. More than 700 climate + justice orgs agree: it's time for Congress and @JoeBiden to take action on the #ClimateEmergencyNOW! https://t.co/OP9IhyINyQ

Thanks to a pair of runoff wins in Georgia, Democrats now control both chambers of Congress along with the White House. The bill’s introduction comes after Senate Majority Leader Chuck Schumer (D-N.Y.) said on MSNBC last month, “I think it might be a good idea for President Biden to call a climate emergency.”

The legislation was lauded by a range of advocacy groups including 350.org, Center for Biological Diversity, the Climate Mobilization, Food & Water Watch, Friends of the Earth, Greenpeace USA, Justice Democrats, Public Citizen, and the Sunrise Movement — whose executive director, Varshini Prakash, said that “this bill is a good sign that our leaders are finally understanding what young people and climate activists have been shouting from the rooftops for years — that the fires that burned our homes to rubble, the floods that took our family and friends with them, are a climate emergency, and bold action must be done now to save our humanity and our future.”

Given that potential, Laura Berry, research and policy director for the Climate Mobilization, said that passing the bill “is a key next step to implementing a national climate response before it’s too late — by declaring climate change a national emergency, President Biden must use the powers of his office to launch the whole-of-society mobilization we need to ensure a just transition away from fossil fuels, and to build a safe and equitable future for all.”