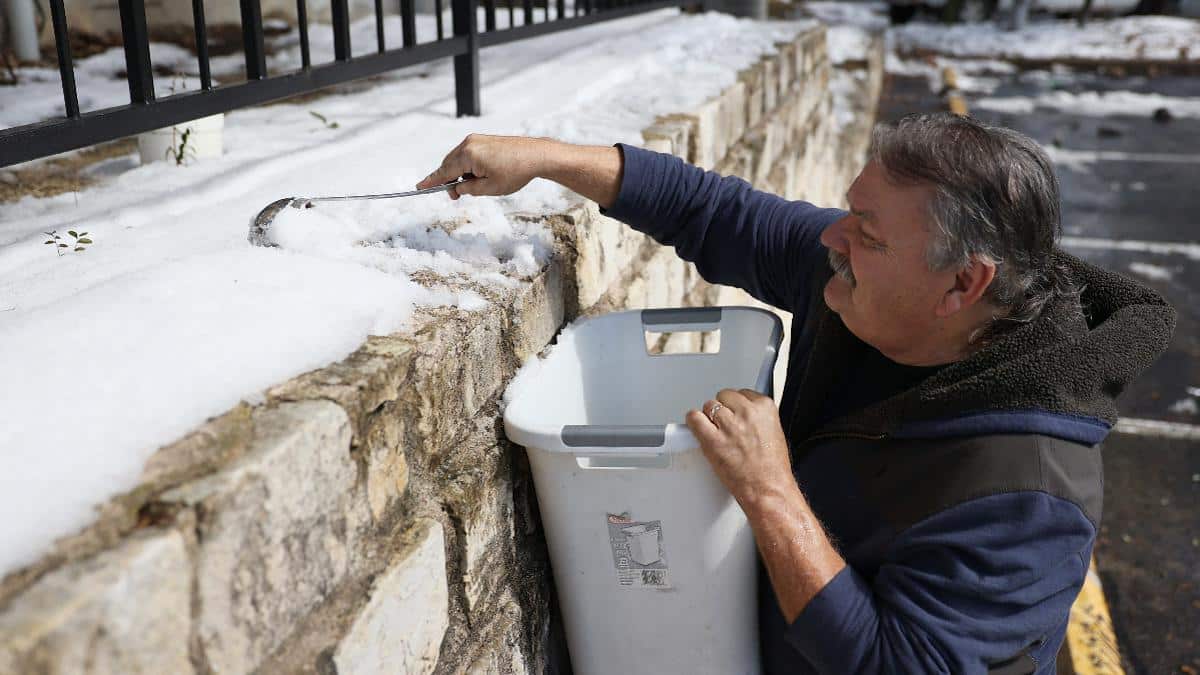 A resident of Austin, Texas scrapes snow into a bucket to melt it into water on Feb. 19, 2021. Winter storm Uri brought historic cold weather, leaving people in the area without water as pipes broke. Joe Raedle / Getty Images

President Joe Biden is being called on to back newly reintroduced legislation that seeks to remedy the nation’s drinking water injustices with boosts to infrastructure and the creation of a water trust fund.

“From the plague of water shutoffs due to unaffordable bills during a pandemic, to the recent heartbreaking scenes across the South of frozen pipes leaving millions without water, it has become desperately clear that our country is in a water crisis,” said Food & Water Action executive director Wenonah Hauter in a statement Thursday.

“Grave crises require robust solutions, and this is just what the WATER Act provides,” said Hauter.

The WATER Act — the acronym for the Water Affordability, Transparency, Equity, and Reliability Act of 2021 — was reintroduced Thursday by Democratic Reps. Brenda L. Lawrence (Mich.) and Ro Khanna (Calif.). Sen. Bernie Sanders (I-Vt.) introduced the companion legislation in the Senate.

Supporting the measure is a diverse collection of over 500 organizations including Corporate Accountability, the Communications Workers of America (CWA), Food & Water Watch, and the NAACP. Seventy-four lawmakers in the House and Senate are co-sponsors.

It’s no coincidence the communities with the highest rates of coronavirus infections are the same ones with dirty water. Proud to re-introduce the WATER Act with @RepLawrence, and push this country one step closer to providing equitable services to everyone. https://t.co/YenIU0pfjI

Echoing Hauter, Lawrence said in a statement that we “have a water crisis in the United States that affects every corner of our country.” And waiting to act on the issue, she added, is simply not an option.

According to a summary from the Michigan Democrat’s office, the WATER Act:

Assets for the trust fund would be created by “rolling back a small portion of the Trump administration’s corporate tax cuts by increasing the corporate income tax rate by 3.5 percentage points.”

Affordability has long been a drinking water-related concern in communities across the U.S. — as have other issues including the presence of a class of chemicals known as PFAS and privatization woes. The Flint, Michigan water crisis also punctuated concerns about the management of water systems and drinking water safety.

Events over the past year have only underscored the need for public investment in the nation’s water systems, WATER Act supporters say.

“The crisis in Texas illuminated how vital access to running water is for human survival. And the Covid-19 pandemic has put on display the unjust reality of America’s water affordability, reliability, and equity crisis,” said Brittany Alston, deputy research director of Action Center on Race & the Economy (ARCE).

Alston said that the WATER Act represented “a real solution” to those problems. She added, “The only way to combat America’s water crisis is with this type of bold, reparative change that both challenges corporate power and addresses water affordability, accessibility, and quality across the entire country, especially in low-income and BIPOC communities.”

In a June op-ed at The Guardian, Sanders and Lawrence — who also teamed up last year to introduce the WATER Act — detailed the nation’s water crisis, writing, in part:

Unbelievably, when it comes to water infrastructure, America’s challenges resemble those of a developing country. The American Society of Civil Engineers gives our drinking water infrastructure a “D” grade and our wastewater infrastructure a “D+.” The Environmental Protection Agency estimates that raw sewage overflows at least 23,000 times each year. Up to 1.7 million Americans lack access to basic plumbing facilities such as a toilet, tub, shower, or basic running water. Almost 200,000 households have absolutely no wastewater system. Up to 10 [million] homes across America get water through lead pipes. Six years since the start of its water crisis, Flint still does not have clean water. Meanwhile, in Denmark, South Carolina, families are forced to travel 20 miles each month in order to collect clean drinking water.
Not only do Americans have to deal with poor-quality and often toxic drinking water, we have the “privilege” of paying an arm and a leg for it. Before the coronavirus pandemic hit, nearly 14 [million] households were unable to afford their water bills, whose prices increased more than 40% since 2010. At this rate, more than a third of American households may not be able to afford their water bills five years from now. ⁠Furthermore, due to the economic meltdown caused by the coronavirus, millions of Americans who don’t know where their next paycheck will come from are now at risk of losing their water service. As public health officials warn that this deadly disease will be with us for quite some time, how are families supposed to wash their hands regularly when their utility company is shutting off their water?

According to Food & Water Watch’s Hauter, the need for swift action is clear.

“The time for Congress and the Biden administration to make this critical legislation a priority has very clearly come,” she said. “Our country can’t wait any longer for a functional, safe, and affordable water system for every community.”