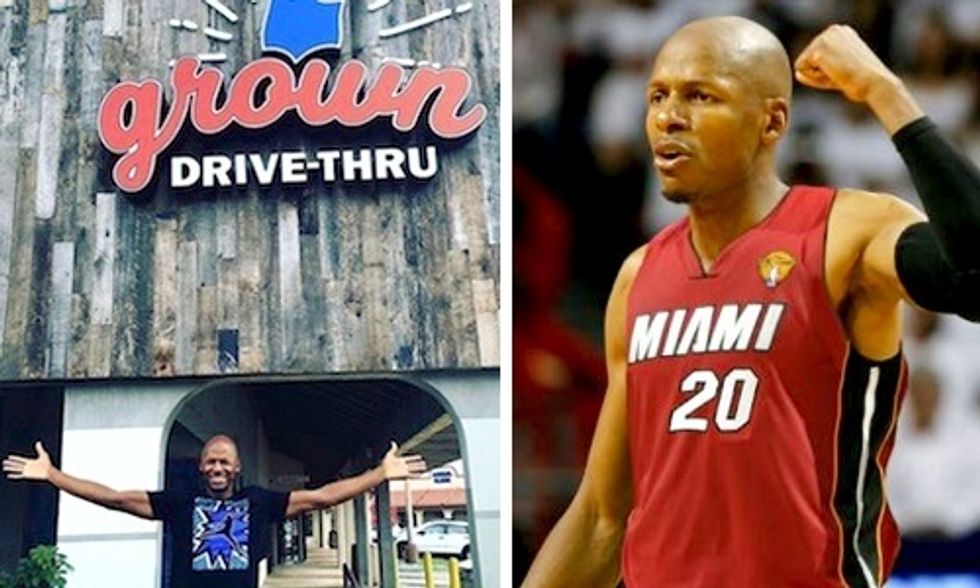 The Allens were inspired to open the environmentally-friendly space because they wanted to find healthy options for their son Walker, who was diagnosed with Type I diabetes when he was only 17 months old, the Miami Herald reported.

“People want to be healthier, eat cleaner and feel better about what they’re putting in their bodies,” the former Miami Heat player told the Herald. “I know this from personal experience, and when Grown opens it will very much be a concept unlike anything else, designed to be accessible by everyone, from the weekend warrior to the soccer mom and anyone in between.”

Grown, set to open in March, will feature healthy, gluten-free and low-cost fare such as juices, smoothies, soups, sandwiches, wraps, baked goods and coffee with prices ranging from $4-18. It will also have a drive-through, carry-out and grab-and-go options.

The co-founder standing in front of his newly installed drive thru signage. Allen played for several NBA teams including two seasons for the Miami Heat.  Photo credit: Pre-Game Meal Facebook

Shannon told the Herald that the Allen family decided to open their restaurant because they were searching for healthy yet convenient food for her now 9-year-old son.

"I had an aha moment where I realized I couldn’t sit around helpless waiting for someone else to create a fast-food option that met our family’s dietary needs, and as we did our research it became obvious that this wasn’t a struggle unique to us, families everywhere are looking for convenience without compromise,” she said.

Shannon, who is the creator and executive producer of the cooking show The Pre-Game Meal, told CBS Miami that she carefully monitors what Walker, and the rest of the family, eats: “We’re so diligent about everything we put in our mouths.”

The Allen family has done a number of public appearance and public service announcements to advocate for more diabetes research. Three million people in the U.S. are diagnosed with Type 1 Diabetes.

As for the restaurant itself, "every inch" of the 1,900-square-foot space will be environmentally friendly, according to the Miami Herald.

Its host of green building elements include a rooftop garden where vegetables and herbs will be harvested for use in the restaurant’s kitchen. The building’s facade will be built from 100-year-old reclaimed barn wood.

To inspire a healthy eating lifestyle for kids, the restaurant's interactive iPad bar will have nutritional- and fitness-themed games. Not only that, the menus and food packaging will be plantable.

The restaurant will use plantable and compostable take-out boxes. Photo credit: Grown Instagram

Shannon wrote on her Facebook page that the flagship came after six years of conceptualizing, planning, assembling their team, scouting locations and building the restaurant.