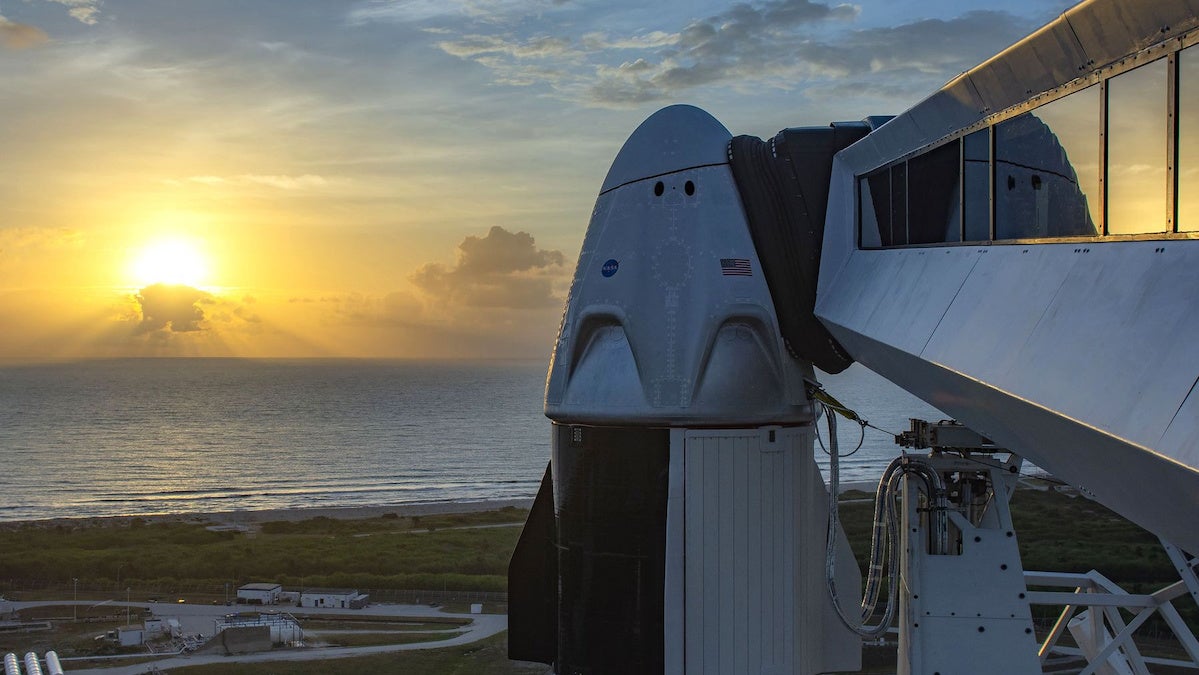 The SpaceX crew capsule will launch out of Cape Canaveral, Florida. SpaceX

After a minor setback, a new era in space travel and tourism is set to launch this weekend.

On Wednesday, a SpaceX rocket launch carrying NASA astronauts was postponed 16 minutes before liftoff due to weather concerns.

“We had simply too much electricity,” said Jim Bridenstine, NASA administrator, to BBC. “There was a concern that if we did launch, it could actually trigger lightning.”

The joint-mission, Demo-2, will make history as the first-ever manned commercial space flight and will take place in SpaceX’s spacecraft “Crew Dragon.” 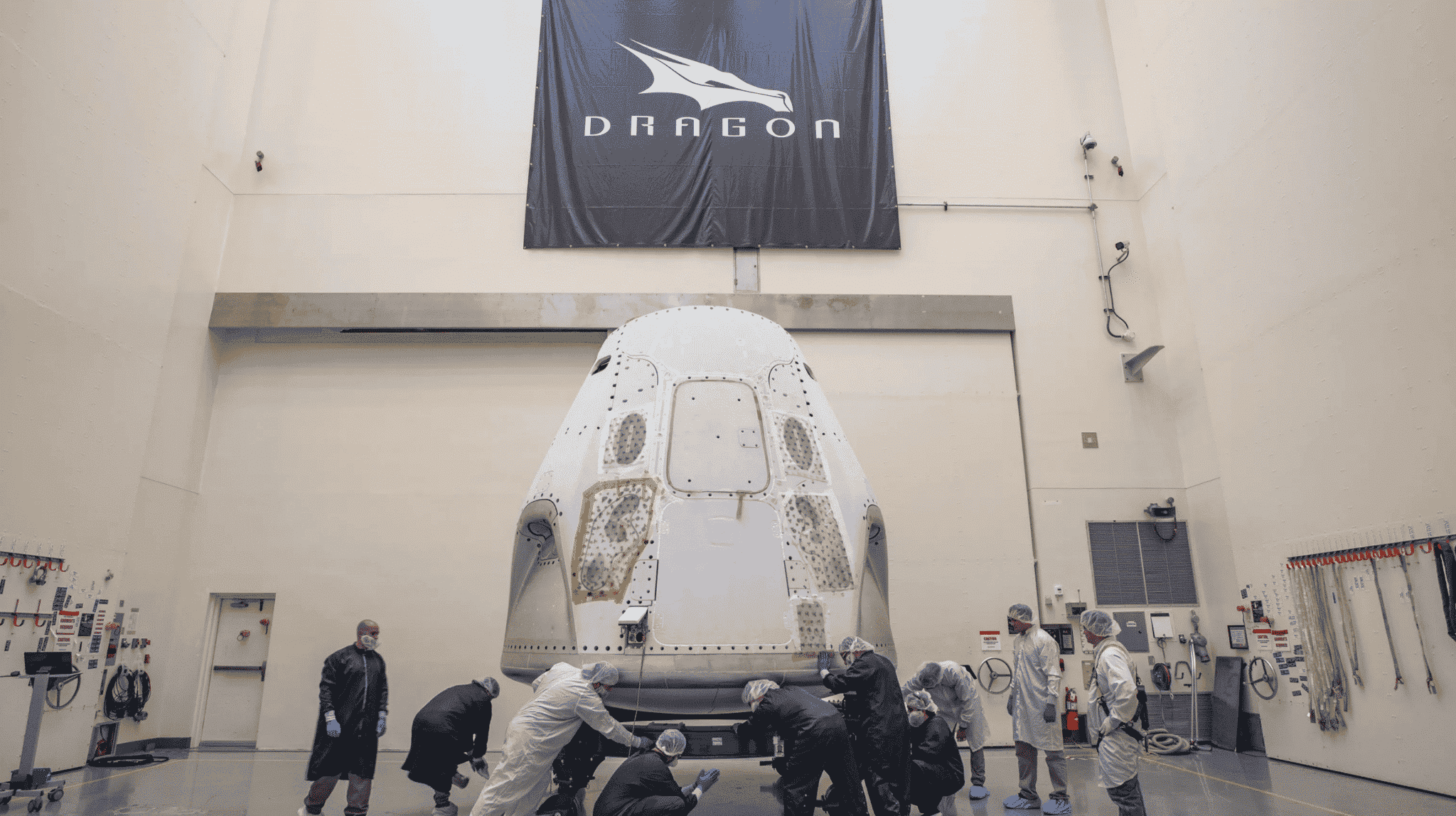 When the SpaceX shuttle launches its private spacecraft, the Crew Dragon, with NASA astronauts in tow, it will mark the beginning of commercialized space exploration. SpaceX

The endeavor is actually a groundbreaking public-private partnership between NASA and SpaceX, who both hope the collaboration will further open up the universe of space exploration, literally.

In 2011, NASA retired its aging space shuttle program. Since then, the U.S. hasn’t launched its own astronauts into space, booking them tickets instead to train on and launch from Russia’s Soyuz spacecraft, reported CNN.

When the Crew Dragon launches, it will mark the return of America’s ability to launch its own astronauts into space.

“When we launch from America with a rocket built in America by an American company who’s only been flying vehicles for the last decade or so, that is a success story straight out of the movies,” said Douglas Hurley, one of the two NASA astronauts manning the mission, reported NBC News. “The Russians have been great partners, but it’s important for the United States to have its own launch capabilities.”

NASA hopes that its partnership with SpaceX will also usher in a new commercial marketplace for low-Earth orbit transportation. 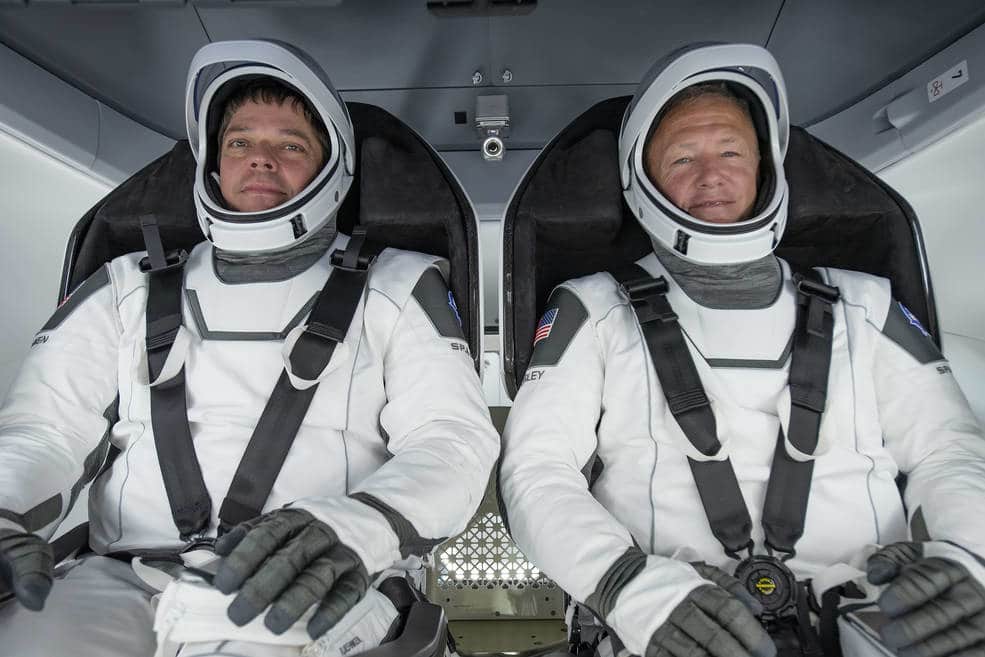 Rather than finance a replacement for the Space Shuttle, NASA has created the Commercial Crew Program to outsource “safe, reliable, and cost-effective transportation” of cargo and crew to and from the International Space Station (ISS) to the private sector. The underlying objective was to free up NASA‘s time and resources for deeper space exploration, reported CNN.

“NASA has an ability to be a customer in a very robust commercial marketplace in low-Earth orbit,” Bridenstine told NBC News. The top NASA official also envisioned a future where that marketplace is “entirely commercialized,” where NASA is “one customer of many customers,” and where numerous providers continue to compete on cost, innovation and safety, reported BBC.

SpaceX senior advisor Garrett Reisman told Bloomberg that the “new venture” is a different model from what the space agency has used in the past. Private companies can now retain their intellectual property and own and operate the new technology, a huge upside for innovators.

“It’s also the beginning of a whole new age, a whole golden age of commercial space flight,” he continued, reported Bloomberg. “One of the things that is different is the fact that NASA doesn’t own the Falcon 9 [rocket] and Dragon [spacecraft]; SpaceX does. So after this mission is over, we can use the same rocket, the same spacecraft to take ordinary citizens up into space. It’s opening up all kinds of new possibilities.”

The outsourcing has potentially saved taxpayers -30 billion dollars, Reisman estimated, reported Bloomberg. While seats on the Soyuz cost NASA up to million each, Crew Dragon seats cost the agency roughly million each for this mission, CNN found. According to CEO Elon Musk, filling all seven seats in the SpaceX capsule will lower costs to million per astronaut, reported ABC News.

With the successful completion of this last test mission, which is also SpaceX’s first flight with humans aboard ever, the company will have the green light to ferry crew to the ISS regularly starting in August or September, reported ABC News.

“This is a huge milestone for NASA, for the country, and for SpaceX, but there will be other milestones after this,” Reisman told Bloomberg. He said it is “extremely realistic” that the Crew Dragon will be used to fly private citizens into space in 2021.

“This era of commercial space travel and space tourism is literally right around the corner,” he added, reported Bloomberg.

Musk will continue to seek out potential new clients for his budding space transport business, perhaps space tourists looking for a quick getaway to the Moon or Mars, reported Bloomberg.

“We’re standing at the threshold of all of this commercial activity in space,” said Wayne Hale, who led NASA’s space shuttle program, reported Bloomberg. “One of the whole points of this exercise is to build a commercial business that can go on and do things in space that are not funded by the taxpayer, that actually create wealth and jobs.”

After launch, Hurley and Robert Behnken, the other NASA astronaut, will spend roughly 19 hours aboard the Crew Dragon before arriving at the ISS, CNN reported. They will stay in space to staff the ISS for anywhere from 30 to 110 days, according to NASA. Then, the SpaceX Crew Dragon will return on its second manned mission with fresh crew and to bring the veteran astronauts back to Earth, CNN reported.