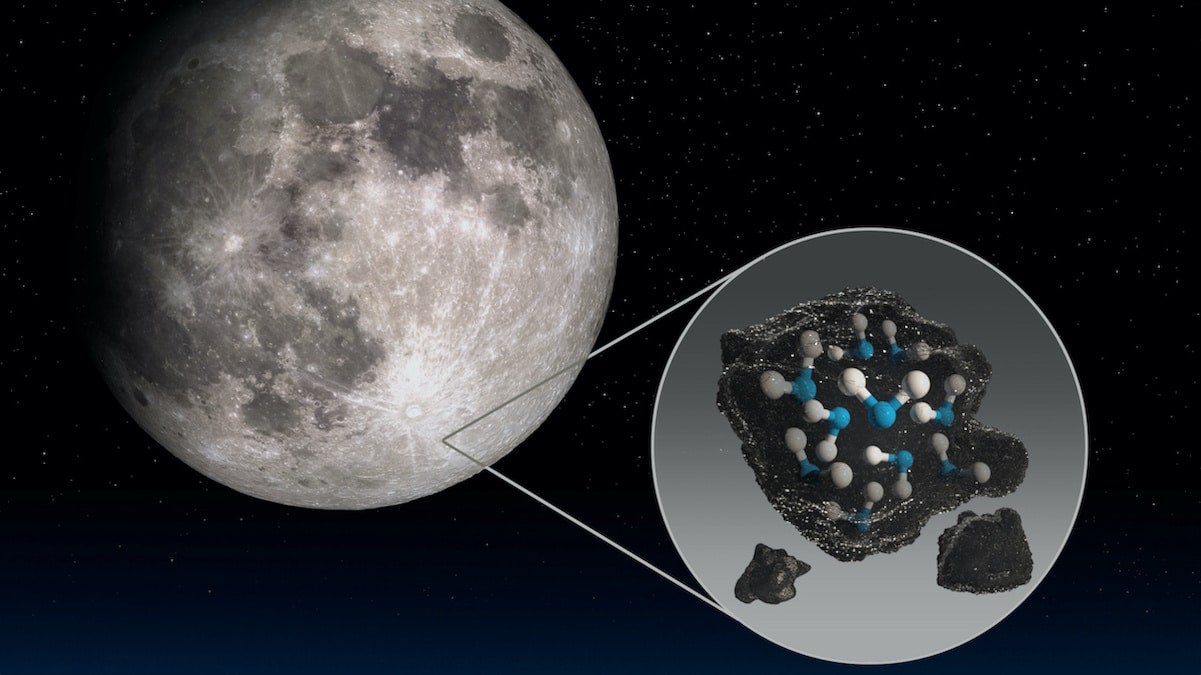 An illustration highlights the moon's Clavius Crater with an illustration depicting water trapped in the lunar soil there. NASA / Daniel Rutter

A pair of studies released Monday confirmed not only the presence of water and ice on the moon, but that it is more abundant than scientists previously thought. Those twin discoveries boost the prospect of a sustainable lunar base that could harvest the moon’s resources to help sustain itself, according to the BBC.

Both studies were printed in Nature Astronomy. In the first study, a NASA telescope affixed to the fuselage of a 747 airplane flying at altitudes up to 45,000 feet detected the presence of water in a large crater visible from Earth. The telescope, called the Stratospheric Observatory for Infrared Astronomy (SOFIA), zeroed in on the moon’s surface with remarkable clarity to determine the molecular composition of the moon’s face, according to a NASA statement.

Images from SOFIA allowed scientists to determine that a large portion of the hydrogen and oxygen combination they had previously noticed on a sunlit area of the moon are water, according to The New York Times.

“This discovery reveals that water might be distributed across the lunar surface and not limited to the cold shadowed places near the lunar poles,” Paul Hertz, the director of NASA’s astrophysics division, said during a news conference on Monday, as The New York Times reported.

In the second study, the NASA scientists suggest that water might be more widespread than they initially thought since it is likely trapped in many of the moon’s shadowy surfaces, according to The Verge. Those cold areas of the moon possibly shelter water in an area over 15,000 square miles, according to the study.

The discovery is a boon to a potential lunar base since taking water to space is pricey, costing thousands of dollars per gallon. The discovery of water on the moon may mean that future astronauts will be able to hydrate and refuel their rockets, as The Washington Post reported. It also means they would be able to water plants, according to The Verge.

“Anytime we don’t need to pack water for our trip, we have an opportunity to take other useful items with us,” said Jacob Bleacher, chief exploration scientist for NASA’s human exploration and operations directorate, to The New York Times.

Hannah Sargeant, a planetary scientist from the Open University in Milton Keynes, told the BBC that the location of the water will likely determine where a lunar base is established

Previous discoveries of water were found in craters in the moon’s perpetually dark south. Temperatures there reach about -400 degrees Fahrenheit, making it impossible to reach the water with modern technology.

“They happen to be the coldest known places in the Solar System, believe it or not,” Paul Hayne, a planetary scientist at the University of Colorado and a lead author on the second study, told The Verge.

That makes the discovery of water deposits in less treacherous areas appealing to scientists thinking about future moon exploration, according to The New York Times.

“If we find that it’s abundant enough in certain locations, it would be easier to access versus going into these very cold, very dark places,” said Casey Honniball, a postdoctoral fellow at NASA’s Goddard Space Flight Center and lead author of the first study, to The Verge.

For the next steps, NASA will send unmanned rovers to the moon’s south pole in 2023 to drill for water a meter below the surface, according to The Washington Post.

“Both papers deepen the mysteries of lunar water while providing pieces of the puzzle,” wrote Bethany Ehlmann, an assistant professor of planetary science at Caltech who was not involved in the research, in an email to The Washington Post. “It’s exciting to think that lurking in the shadow within ten degrees of the pole are tiny reservoirs of water ice.”