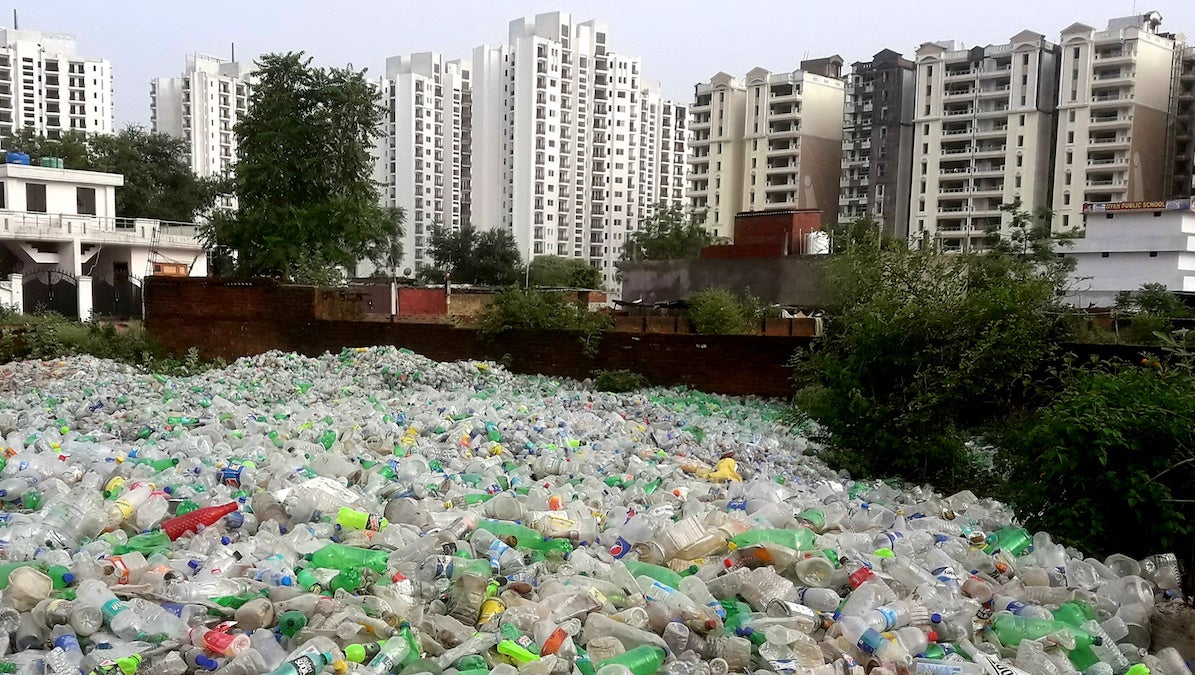 A garbage yard in Lucknow, India where plastic bottles are dumped before being sent to recycling. Abhimanyu Kumar Sharma / Moment / Getty Images

Scientists have engineered a mutant enzyme that converts 90 percent of plastic bottles back to pristine starting materials that can then be used to produce new high-quality bottles in just hours. The discovery could revolutionize the recycling industry, which currently saves about 30 percent of PET plastics from landfills, reported Science Magazine.

Poly(ethylene terephthalate) (PET) is the plastic used in soda bottles, textiles and packaging. With almost 70 million tons manufactured annually worldwide, it is also the most abundant polyester plastic because it is strong and lightweight, explains the study’s abstract, which was published in Nature.

Unfortunately, current PET recycling is inefficient. When plastics of different colors are melted down during the recycling process, a gray or black plastic starting material results that few companies want to purchase to package their products, explained Science Magazine. The process results in low-grade plastic fibers only good enough for clothing and carpets, reported The Guardian. These eventually end up in a landfill or incinerated, added Science Magazine.

“It’s not really recycling at all,” explained professor John McGeehan, the director of the Centre for Enzyme Innovation at the University of Portsmouth, to Science Magazine.

McGeehan, who was not involved in the research, called the new enzyme “a huge step forward,” reported Science Magazine. He also noted that Carbios, the French sustainable plastics company behind the breakthrough, is the industry leader in engineering enzymes to break down PET at large scale, reported The Guardian.

For years, scientists at the forefront of the cultural war on plastic waste have searched for microbial enzymes that could break down PET and other plastics. Recently, a group of German scientists discovered a bacterium that breaks down polyurethane plastic and uses it for food to fuel the process, but cautioned it might be a decade before commercial scale could be reached. Similarly, in 2018, researchers led by McGeehan accidentally discovered an enzyme that digests PET, but noted that it doesn’t do so very quickly (a few days). Even the base enzyme used in Carbios’ research, leaf-branch compost cutinase (LLC) has been studied since 2012, when it was discovered in a compost heap of leaves by researchers at Osaka University, reported Science Magazine.

The team at Carbios screened 100,000 micro-organisms for promising candidates, and eventually began introducing mutations to LLC. Native LLC falls apart after just a few days of working at 65°C, the temperature at which PET begins to soften but not yet melt, explained Science Magazine.

Our publication in @nresearchnews hails the breakthrough innovation developed Carbios and @TBI_Biotech. Thanks to our partners who have chosen to support our disruptive enzymatic #recycling technology: @Loreal, @NestleWatersHQ, @PepsiCo, @SuntoryGlobal, @TechnipFMC & @Novozymes pic.twitter.com/2rOHYVZC2R

The researchers re-engineered LLC to work faster and at higher temperatures. Alain Marty, Carbios’ chief scientific officer, teamed up with Isabelle Andre, an enzyme engineering expert at the University of Toulouse, to isolate an optimized enzyme that is 10,000 times more efficient at breaking down the chemical bonds in PET than native LLC, reported Science Magazine. It also functions at 72°C, close to the temperature at which PET melts, making the process even more efficient.

The mutant enzyme broke down 90% of 200 grams of PET in a small reactor in just 10 hours. Different colors didn’t matter because the enzyme can ignore dyes and other plastics in the molten mix. The researchers were able to use the resultant chemical building blocks to produce new PET and food-grade plastic bottles that were just as strong as those made from virgin plastics, reported Science Magazine.

“It’s a real breakthrough in the recycling and manufacturing of PET,” said Dr. Saleh Jabarin, a member of Carbios’ scientific committee in a company statement about the discovery. “Thanks to the innovative technology developed by Carbios, the PET industry will become truly circular, which is the goal for all players in this industry, especially brand-owners, PET producers and our civilization as a whole.”

Carbios reports that the enzyme costs just 4% of what virgin plastic made from oil costs, noted The Guardian. The enzyme cannot be added to waste plastic until it is ground up and melted, however, so the recycled PET is still more expensive than virgin plastic. Still, McGeehan noted to Science Magazine that companies may be willing to pay a bit more for a recycled plastic that is as durable and attractive as the virgin material.

Carbios is partnering with major companies, including Pepsi and L’Oréal, to accelerate development and produce the new enzyme at scale, reported The Guardian. It is aiming for industrial-scale recycling within five years. Science Magazine reported that a demonstration plant that can recycle hundreds of tons of PET per year should be online by next year.

“We are the first company to bring this technology on the market,” said Martin Stephan, the deputy chief executive at Carbios, to The Guardian. “Our goal is to be up and running by 2024, 2025, at large industrial scale.”

McGeehan explained to The Guardian that the discovery could finally make true industrial-scale biological recycling of PET a possibility. The new enzyme is faster, more efficient and more heat-tolerant — qualities that make this such a large advancement for the field, he added.

McGeehan said, “It represents a significant step forward for true circular recycling of PET and has the potential to reduce our reliance on oil, cut carbon emissions and energy use, and incentivize the collection and recycling of waste plastic,” reported The Guardian.