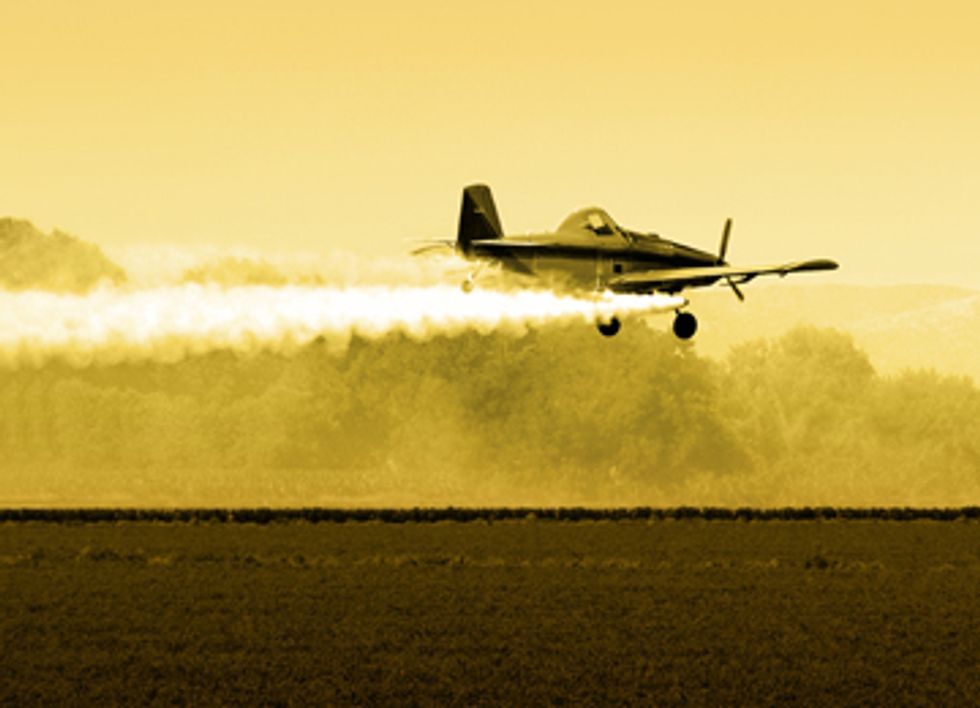 Early in July, Monsanto rolled out the red carpet for farm media in North Dakota, promoting its new, yet highly controversial, herbicide-resistant genetically engineered (GE) seeds. Touted at an industry field day in Cass County, these new soybean seeds are designed to be used with the volatile herbicide, dicamba—a close cousin of 2,4-D.

Dicamba-resistant soy is still awaiting U.S. Department of Agriculture approval, as are 2,4-D-resistant corn and soy. And after receiving hundreds of thousands of comments opposing the approval of these crops, the agency recently extended its decision-making timeline. Despite the outcry, however, Monsanto has plowed full speed ahead, planting and spraying these crops in large, field-sized “ground-breaker” demonstration plots in North and South Dakota and in research plots in undisclosed locations.

Farmers, as well as other concerned citizens, are particularly worried about pesticide drift, crop damage and health harms that would likely accompany planting and spraying of dicamba- and 2,4-D-resistant crops.

Most at risk are fruit, nut and vegetable growers around the country, whose produce is highly susceptible to severe damage from 2,4-D and dicamba—herbicides known to volatilize and drift for miles. In one incident in California’s San Joaquin valley, 2,4-D drifted 100 miles from where it was applied, damaging 15,000 acres of cotton and a pomegranate orchard along the way.

At the field day in July, a Monsanto representative claimed that the corporation was working on a new formulation of dicamba that wouldn’t volatilize quite so easily or drift quite so far. The Monsanto employee acknowledged that dicamba residue in sprayer tanks would also be a serious problem, but explained that if growers are “good,” “sophisticated” and “rigorous” in following detailed directions about nozzle size, wind speed and cleaning out their sprayers with 45 solid minutes of rinsing after use, then risk of destroying their own or neighbors’ crops with inadvertent dicamba exposure could be minimized.

Waiting and watching until winds are precisely between three and ten mph? Not so feasible when you have to schedule a pesticide applicator’s visit to your field well in advance. Forty-five minutes of rinsing? That’s a lot of water to expect farmers to use, in a time of unpredictable rain and increasing water scarcity. Sounds a lot like a company set-up to blame the farmer as soon as anything goes wrong.

“Both the volatility and the direct drift threat are very real with dicamba. And it’s not just to our crop. It’s to homeowners and rural gardeners, it’s to landscapes in the countryside, and we believe there’s going to be a lot of people that’s going to see effects from this.” ­

Grape growers are also getting worried. With new wine industries emerging in virtually every state across the country—providing growers with a much-needed economic boost and way to diversify their production—reaction to the possible introduction of 2,4-D and dicamba crops has been negative.

Pesticide Drift: Old Problem, About to Get Worse

“We disked it up. They were gone. Two and a half acres of nothing, just bare ground.” — Brett Middlesworth, Indiana tomato grower, describing crop loss due to herbicide drift

For years, pesticide drift has been hurting farmers, damaging their crops and making families in rural communities sick. One Indiana tomato farmer lost $45,000 worth of his crop and sustained permanent damage to his larynx after getting sprayed with RoundUp last summer. Organic farmers in Minnesota lost their organic certification and their crops as a result of drift. A generation of rural communities in California and Hawaii have been getting sick, while government agencies inexplicably delay implementing rules to safeguard children’s health.

If 2,4-D and dicamba crops are introduced into the picture, the drift problem will quickly go from bad to worse. I’ve already written about the livelihood harms, and my colleague, Margaret Reeves, has warned of the health harms of these herbicide-based GE crops.

Apparently aware of growing opposition to these new herbicide-resistant crops—and in particular, farmers' worries that they will drive the emergence of yet more resistant superweeds—Monsanto is planning to offer financial incentives to farmers to spray additional types of herbicides. And if soybean growers don't adopt the new dicamba seeds, their conventional (or even their RoundUp-Ready) soy will be threatened, as dicamba drifts over from their neighbors’ fields. So they'll pretty much have to get with the dicamba program.

Monsanto’s latest product line might boost company sales for a time, but it fails to provide a pathway towards the safe, healthy and sustainable farming that American farmers want and deserve. For state-of-the-art, innovative pathways to such a vision, growers are practicing ecological farming methods across the U.S. today.