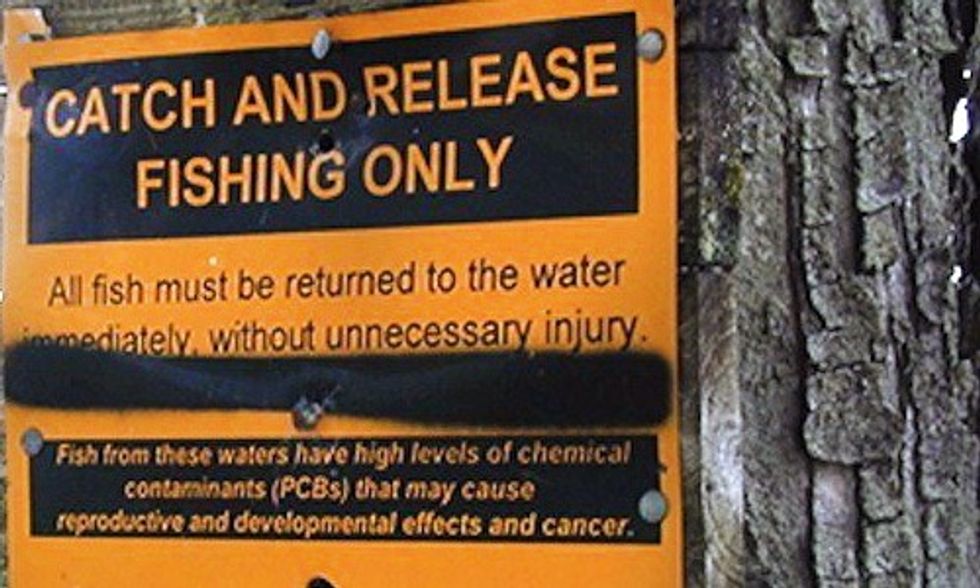 The city of Oakland, California filed a lawsuit that holds Monsanto accountable for allegedly contaminating of the city's storm water as well as the San Francisco Bay with PCBs.

Although PCBs have been banned for decades, the toxic compound is still detected shows in the environment today. This warning sign was displayed near New York's Hudson River in 2013. Photo credit: NOAA

Before focusing its operations on agrotechnology and supplying the world with its genetically modified seeds, Monsanto was the primary manufacturer of PCBs, a chemical that was once widely used to insulate electronics. Commercial production of PCBs, however, were banned in 1979 by the U.S. Environmental Protection Agency (EPA) over human health and environmental concerns.

Monsanto has faced a spate of PCB contamination lawsuits over the decades and several this year alone. In 2015, the cities of Spokane, San Diego and San Jose also sued the company over PCB-contaminated sites.

The latest suit was filed by personal injury firm Gomez Trial Attorneys on behalf of Oakland City Attorney Barbara J. Parker. According to a news release, California's Water Resources Control Board determined that the presence of PCBs in Oakland’s storm water threatens San Francisco Bay as a habitat for fish and wildlife and interferes with the Bay’s use and enjoyment by the people of the State of California.

Removing PCBs county-wide could incur costs up to $1 billion, the release said.

“The company that is responsible for this vast contamination should bear the burden of cleaning up our environment, not the taxpayers of Oakland and California,” Parker said in statement.

“Monsanto knew that its products posed a significant threat to human and environmental health around the world. However, the company chose profits over protecting people, and American cities and citizens are still suffering the consequences,” she added.

It has been reported that Monsanto allegedly knew that PCBs were toxic well before the 1979 ban but continued production of the profitable compound anyway. Think Progress reported:

In a 1970 internal memo, agrochemical giant Monsanto alerted its development committee to a problem: Polychlorinated Biphenyls—known as PCBs—had been shown to be a highly toxic pollutant.

PCBs—sold under the common name Aroclor—were also huge business, raking in some $10 million in profits. Not wanting to lose all of these profits, Monsanto decided to continue its production of Aroclor while alerting its customers to its potentially adverse effects. Monsanto got out of the PCB business altogether in 1977—two years before the chemicals were banned by the EPA—but just because the company no longer produces the toxic substances doesn’t mean it can forget about them completely.

Despite the decades-old ban, PCBs remain as a persistent environmental pollutant and can still be released from "poorly maintained hazardous waste sites that contain PCBs; illegal or improper dumping of PCB wastes; leaks or releases from electrical transformers containing PCBs; and disposal of PCB-containing consumer products into municipal or other landfills not designed to handle hazardous waste," the EPA says. PCBs have also been listed as a probable carcinogen and has been known to cause a variety of other adverse health effects.

Monsanto is facing a lot of bad news lately. In addition to the new lawsuit, Reuters reports that the company is expecting to lose 23 to 33 cents a share in its first fiscal quarter of 2016.

The loss is due to restructuring costs, pricing pressures on its herbicide glyphosate, slower-than-expected U.S. corn seed sales and a weak currency in Brazil, a top Monsanto executive said.

Amid slumping profits, Monsanto announced last month it was cutting 2,600 jobs, or 12 percent of its 22,500-employee workforce, over the next two years.