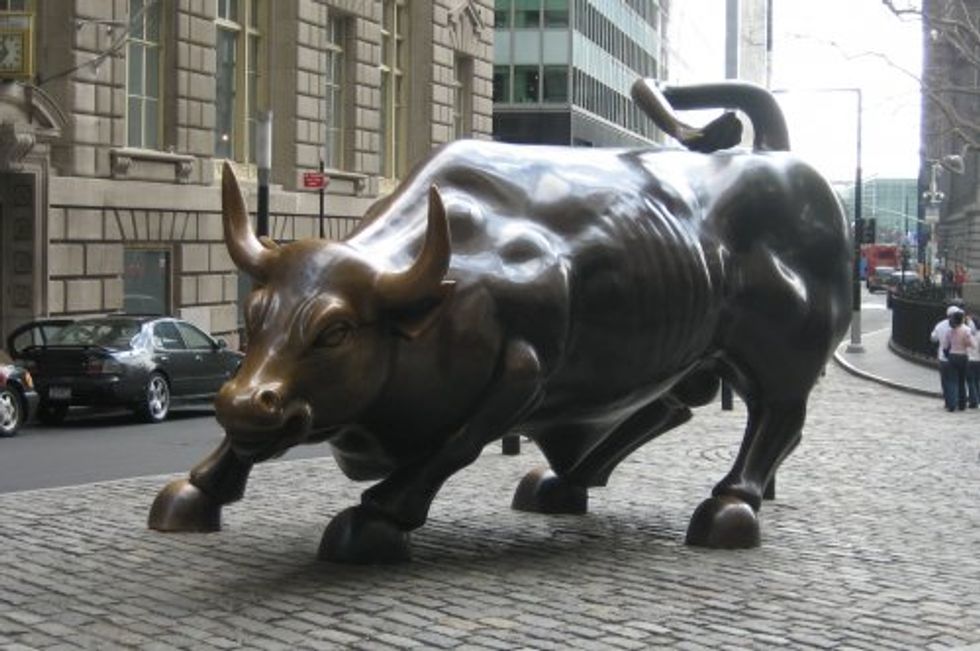 If you are paying attention to Occupy Wall Street—and by now most people are—the anti-corporate message is coming through loud and clear. Most participants at the events now spreading across the country say they are no longer willing to let powerful corporate interests determine the course of their lives. These Americans realize that a participatory democracy is essential.

As it stands today, 75 percent of the population are obese or overweight and many are chronically ill with diet-related diseases. They are also largely dependent on an increasingly unhealthful and contaminated food supply that is heavily controlled by corporate interests. It’s obvious that this is our moment to drive a very important point home—upending corporate control of the food supply is a fundamental change that must occur if the 99 percent are to be healthy participants in a true democracy.

This could be a catalyzing moment for the food movement with a real chance for average Americans to see and hear the connection between corporate control of the food supply and our nation’s health crisis. Indeed, the declaration of Occupy Wall Street (available on its Facebook page), addresses issues the food movement has been working on for years. The declaration states, “They have poisoned the food supply through negligence, and undermined the farming system through monopolization.”

Marion Nestle, Paulette Goddard Professor in the Department of Nutrition, Food Studies, and Public Health at New York University agrees. “Of course Occupy Wall Street connects to the food movement,” she said. “If we had a healthier financial system, we might be able to fund better food assistance, universal school meals, a rational and effective food safety system, and production agriculture that promotes sustainability and affordable food that is healthier for people and the planet. The food movement needs to be there and its voices heard.”

While powerful players like Goldman Sachs and Fannie Mae were on the lips of nearly every American after the 2008 financial crisis, the names of industrial agriculture corporations remain largely unknown. But consider how much power they wield. Take Monsanto as an example. When Monsanto began selling its genetically modified Roundup Ready soybeans in 1996, only 2 percent of soybeans in the U.S. contained their patented gene. By 2008, over 90 percent of soybeans in the U.S. contained Monsanto’s gene. This is especially alarming given that soybeans account for the largest source of protein feed and the second largest source of vegetable oil in the world. According to the United States Department of Agriculture, in 2008-09, the farm value of soybean production was $29.6 billion, the second highest among U.S. produced crops—and soy is ubiquitous in processed foods. It ends up in the meat, milk, eggs and farmed fish many Americans consume (as a result of it being in animal feed) as well as thousands upon thousands of packaged foods usually in the form of soy protein isolate, soy isoflavones, textured vegetable protein and soy oils. Soy accounts for one-fifth of the calories in the American diet.

Monsanto has also produced genetically modified seeds for corn, canola and cotton, with many more products being developed, including seeds for sugar beets and alfalfa. (To see how ferociously Monsanto protects its patented seeds, watch the Oscar-nominated documentary Food, Inc.) As for corn, the highest valued U.S. produced crop, 93 percent of it is genetically engineered. Physicist and internationally renowned activist Dr. Vandana Shiva points out that the notion that genetically engineered food will improve the food supply and improve nutrition is a myth. “These are illusions that are being marketed in order for people to hand over the power to decide what to eat to a handful of corporations,” she said in an interview on her website.

Another corporation with broad reach and control over the foods we eat is Cargill, which rivals Monsanto in its control of the food supply. It is the largest privately held corporation in the nation, owning Cargill Pork and Cargill Beef, the second largest beef producer in North America. According to Anna Lappe’s book "Diet for a Hot Planet," Cargill also owns dozens of subsidiary businesses, is one of the largest commercial cattle feeders in the U.S., the world’s biggest processor, marketer and distributor of grains, oilseeds and other agricultural commodities, and controls 80 percent of the European market for soybean crushing with a similar share for animal feed manufacturing.

If you eat any processed or packaged food, or anything from a typical restaurant or café, you can guarantee that Monsanto or Cargill played a role in those foods somewhere along the line. As Dr. Shiva points out in much of her work, these companies contribute to the toxification of our food supply. It’s not only the lack of nutritional value in many of these highly processed foods, but also the actual toxins that are added to genetically engineered foods. Bees, butterflies, cattle and other animals have been dying as a result of these crops, so how are they affecting humans? (You can listen to Dr. Shiva discuss this here).

If America’s health crisis is any indication, corporate control of the food supply is taking the ultimate toll. American children born in 2000 are the first generation not expected to outlive their parents as one in three is likely to develop diabetes in their lifetime, with those rates even higher for black and Latino children. The corporate monopolies over the food supply and the government’s role in facilitating corporate control translates into control over the health of the American population.

Occupy Wall Street illustrates a basic tenet of democracy—we must participate for it to function properly. We must also participate in our food system to develop local food economies that function with our interests in mind. Our first steps must be learning and teaching others about where our food comes from and how to access healthy food. We must also boycott companies like Monsanto and Cargill, whose sole interest is profit, not our health or protecting the environment.

Writer, activist and academic Raj Patel said that while Wall Street is certainly behind many problems with the food system, there is an even deeper connection between the two. “At its best, the food movement is about learning to see the politics in our everyday lives and then to take a stand against injustice,” he said. “That’s what Occupy Wall Street is doing—creating a space to learn, demand, exchange and organize.”

Occupy Wall Street understands that the corporations—whose driving force is profit not the health of the people, the country or the environment—cannot be allowed to control our political systems. Similarly, when corporations control the food supply we are left with an unsafe and unregulated food supply with virtually no oversight and a population in the midst of a dire health crisis as a result of corporate greed and carelessness.