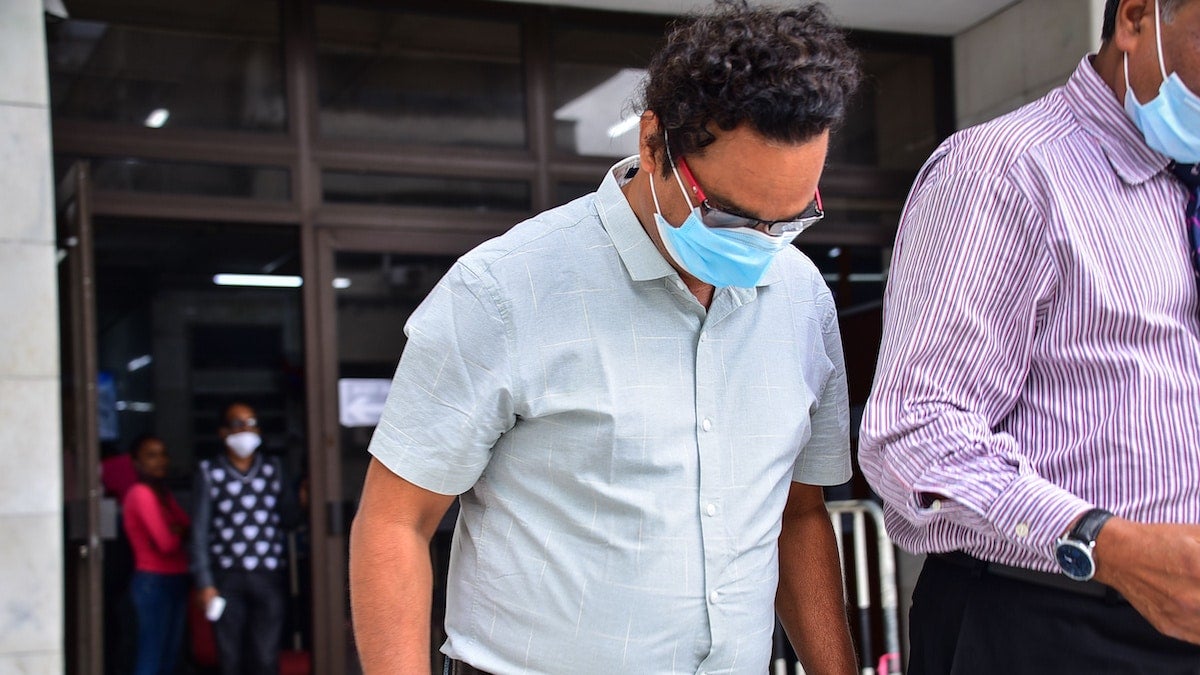 The captain of the vessel behind a devastating Mauritius oil spill left court after being charged Tuesday. RISHI ETWAROO / L'Express Maurice / AFP via Getty Images

The captain of the ship that ran aground off Mauritius and caused an environmental crisis when oil began leaking close to the island nation’s unique marine ecosystems was arrested, both police and the captain’s lawyer said on Tuesday.

“We have arrested the captain of the vessel and another member of the crew. After having been heard by the court they have been denied bail and are still in detention,” Inspector Siva Coothen told Reuters.

Nandeshwar was arraigned in a district court in the Mauritius capital of Port Louis. Both men will appear in court again Aug. 25, Nandeshwar’s lawyer Ilshad Munsoor told The New York Times.

The MV Wakashio ran aground on one of Mauritius’ reefs July 25 and began leaking oil less than two weeks later. It is estimated that at least 1,000 tons of the roughly 4,000 tons on the ship spilled into the Indian Ocean. The rest was removed before the ship split in two over the weekend, except for 90 tons still on the ship.

“Due to the adverse weather conditions, it is still risky to remove the remaining small amount of residual oil in the engine room,” the National Crisis Management Committee said on Monday.

While other major oil spills have been worse in terms of total oil released into the environment, this spill was catastrophic because it occurred near two protected marine ecosystems and one wetland of international importance.

Scientists say damage from the spill could impact Mauritius’ marine life and related tourism for decades, according to Reuters.

“This oil spill occurred in one of, if not the most, sensitive areas in Mauritius,” oceanographer Vassen Kauppaymuthoo told Reuters Aug. 13. “We are talking of decades to recover from this damage, and some of it may never recover.”

It still isn’t clear why the ship passed so close to shore when it ran aground.

The Mauritius coast guard tried repeatedly to warn the vessel that it had charted a dangerous course, but received no reply, an anonymous maritime official told Reuters.

“The route set five days before the crash was wrong and the boat navigation system should have signaled that to the crew and it seems the crew ignored it. The boat did also fail to send out an SOS (when it ran aground), and did not respond to attempts by the coastguard to get in touch,” the official said.

Crew members told police there had been a birthday party on the ship the day it ran aground, BBC News reported.

However, it is unclear if the party happened during the accident or before, according to Reuters.

Another theory is that the ship traveled closer to shore to pick up a WiFi signal, but the maritime official told Reuters that finding a signal would not have required sailing so close to the shore.

In Mauritius, people are angry at what they perceive is a slow government response to the spill and they are hungry for answers.

“Will we know the truth?” Reuben Pillay, who owns a company called Reubs Vision that offers virtual tours of the island, told The New York Times. “We think that there is more to this story.”