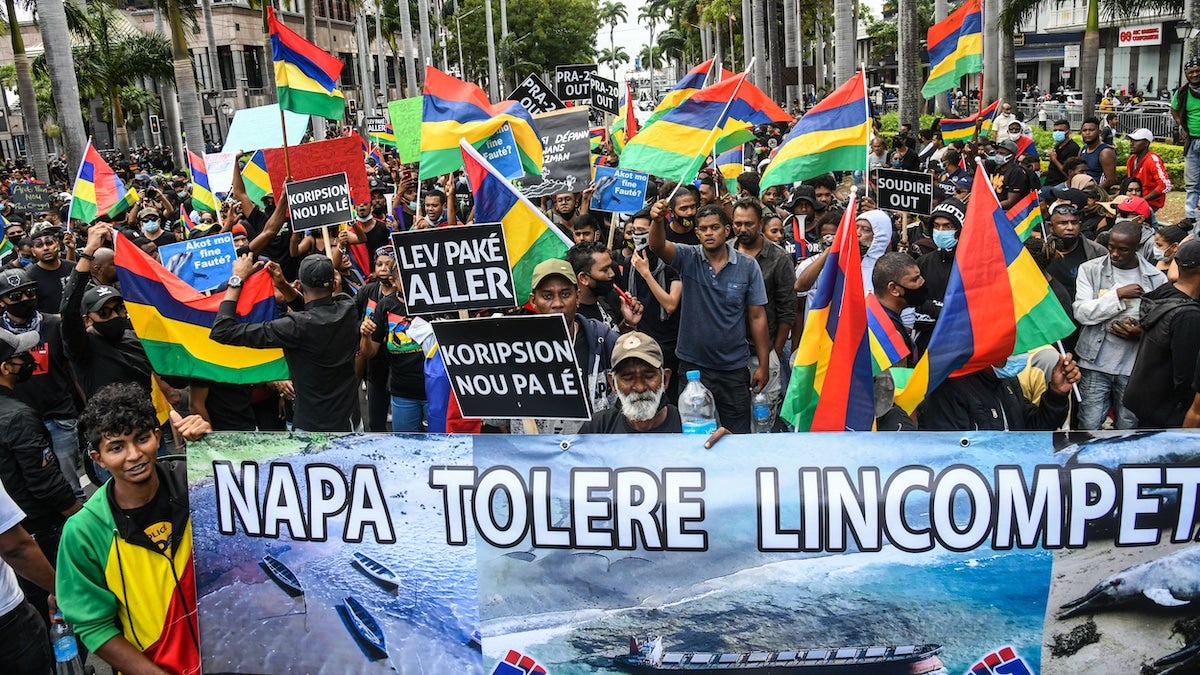 People protest against the government's response to the oil spill disaster in front of the prime minister's office in Port Louis, Mauritius on Aug. 29, 2020. FABIEN DUBESSAY / AFP via Getty Images

Protestors filled the streets of Mauritius’s capital city, Port Louis, over the weekend to demand resignations of officials and an investigation into the oil spill that has jeopardized the future health of the country’s marine reserves, according to Reuters. The protests were catalyzed by more than a dozen dead dolphins with traces of oil washing up on Mauritian beaches.

After the initial wave of dead dolphins, the government revised the number of dead whales and dolphins, bringing the total up to 39, according to Forbes.

Roughly 100,000 people filled the streets on Saturday, according to The Independent, marking it the largest protest the island nation has seen in 40 years. On Saturday, the protestors were dressed in black and held drawings of dolphins and signs saying, “citizens wake up citizens.” Others held signs that said, “Dolphin Lives Matter.”

Some protestors carried Mauritian flags and draped them around statues, including one of Queen Victoria.

The demand for the march came from an ordinary citizen, Jean Bruneau Laurette, a maritime security expert who has taken a strong stance against the country’s prime minister. Laurette has insisted that the government is hiding information about the oil spill and has filed a case in court against the country’s environmental ministry, according to Agence-France Presse (AFP).

Some in the peaceful protest called for the government to step down. They wore t-shirts that read, “I love my country. I’m ashamed of my country,” according to the BBC.

The normally idyllic island is a paradise tourist destination known for its warm waters and vibrant marine life. It seldom sees political movements rise up, underscoring the anger felt by the citizens over what some experts have called an ecological disaster.

The ship the woman referred to is the Japanese cargo ship the MV Wakashio, which was awaiting instructions about its next port after delivering goods, when it struck a coral reef on July 25. The damage to the ship’s hull caused the ship to leak roughly 1,000 tons of fuel and to break apart.

The larger part of the boat was dragged out to sea where it was allowed to sink, while the remaining third sunk where the ship struck the corals. The government’s handling of the crash and the sinking of the ship have drawn anger from the public.

As The Independent reported, Christian Merle, 18, said, “This didn’t have to happen. It is sheer incompetence. What did [the government] do during those nearly two weeks between [the bulk carrier MV] Wakashio running aground and the oil spill? Nothing! Nothing!”

“This rally is an occasion to send a message to tell [Prime Minister] Pravind Jugnauth he has messed up,” marcher Jocelyne Leung, 35, told AFP.

“This is the first time that a citizens’ demonstration has gathered such a big crowd,” said Ajay Gunness who holds the number two post in the opposition party, as the AFP reported.

The demonstration was not just confined to Port Louis. Demonstrators who have a connection to Mauritius turned out in solidarity in cities around the work including in Canada, New Zealand, Australia, Switzerland, France, Luxembourg, Germany and the UK, as Forbes reported.

Hans Balgobin, 31, demonstrated in front of the High Commission of Mauritius in London. “Mauritian society is unique,” he said, as The Independent reported. We all mix together and we live in mutual dignity. I was present today to show my support from abroad.”