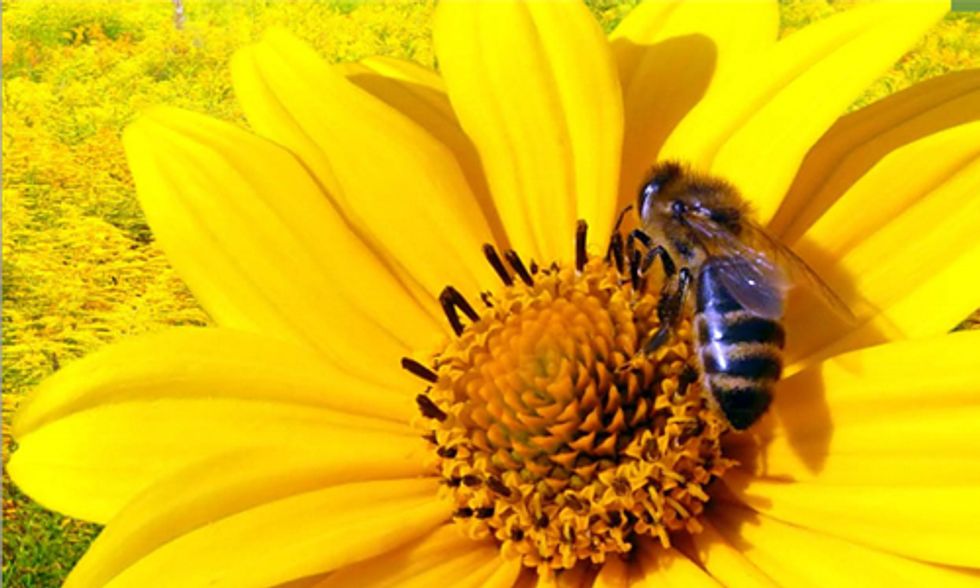 After two years of pressure by the hard-hitting campaign by Friends of the Earth and partners, Lowe’s Home Improvement announced yesterday it will begin to eliminate neonicotinoid pesticides—a leading contributor to global bee declines—from its stores. This public commitment is the most significant announcement so far for a retailer of its size.

“We are pleased Lowe’s is listening to consumer concerns and to the growing body of science telling us we need to move away from bee-toxic pesticides by taking steps to be part of the solution to the bee crisis,” said Lisa Archer of Friends of the Earth. Photo credit: Friends of the Earth

“We commend Lowe’s for taking a leadership position on this critical issue,” said Adam Kanzer, managing director and director of corporate engagement at Domini Social Investments. “Sales of neonic-containing products may be exacerbating a critical systemic risk—alarming declines in honeybees and wild pollinators that support our food systems. As investors and as human beings, we all depend upon pollinators. We believe Lowe’s actions will help protect an irreplaceable resource.”

“We are pleased Lowe’s is listening to consumer concerns and to the growing body of science telling us we need to move away from bee-toxic pesticides by taking steps to be part of the solution to the bee crisis,” said Lisa Archer, Food & Technology program director at Friends of the Earth. “Bees are canaries in the coal mine for our food system and everyone, including the business community, must act fast to protect them.”

According to a study released by Friends of the Earth and Pesticide Research Institute, Gardeners Beware 2014, 51 percent of garden plants purchased at Lowe’s, Home Depot (NYSE: HD), and Walmart (NYSE: WMT) in 18 cities in the U.S. and Canada contained neonicotinoid pesticides at levels that could harm or even kill bees.

In the past year, more than twenty nurseries, landscaping companies and retailers—including Home Depot, Whole Foods (NASDAQ: WFM) and BJ’s Wholesale Club have taken steps to eliminate bee-killing pesticides from their stores. The UK’s top garden retailers includingHomebase, B&Q and Wickes, have also stopped selling neonicotinoids, according to Friends of the Earth.

“Lowe’s public commitment will better position the company to meet the demands of an increasingly environmentally-conscious consumer base. And, it sends an important market signal that restricting the use of bee-harming pesticides is essential to tackling bee declines,” said Susan Baker, vice president, Trillium Asset Management. “We applaud the company’s positive steps on this issue.”

This announcement comes eight months, after a meta-analysis of 1,121 peer-reviewed studies by the task force on Systemic Pesticides concluded neonicotinoids are a leading factor of bee declines and are harming birds, earthworms, butterflies and other wildlife. The task force concluded that immediate regulatory action was needed.

In October, 2014, the Council on Environmental Quality issued guidance for federal facilities and federal lands which included acquiring seeds and plants from nurseries that do not treat these items with systemic insecticides.

On April 2, the U.S. Environmental Protection Agency announced a moratorium on new or expanded uses of neonicotinoids while it evaluates the risks posed to pollinators. This past June, the Obama administration established the Pollinator Health Task Force charged with improving pollinator health, and assessing the impacts of pesticides, including neonicotinoids, on pollinators.

More than one million people have signed petitions and thousands of activists delivered letters directly to Lowe’s stores in cities across the U.S. and Canada asking for this change.

“While there is still a lot of work left to do reduce bees’ exposure to these harmful chemicals, this is a major step," said Larissa Walker, pollinator campaign director at Center for Food Safety, one of the partnering organizations. "The public has been calling for stronger protections for bees and other pollinators, and Lowe’s has finally listened to its customers to do just that.”

Hanako, a female Asian elephant, lived in a tiny concrete enclosure at Japan's Inokashira Park Zoo for more than 60 years, often in chains, with no stimulation. In the wild, elephants live in herds, with close family ties. Hanako was solitary for the last decade of her life.