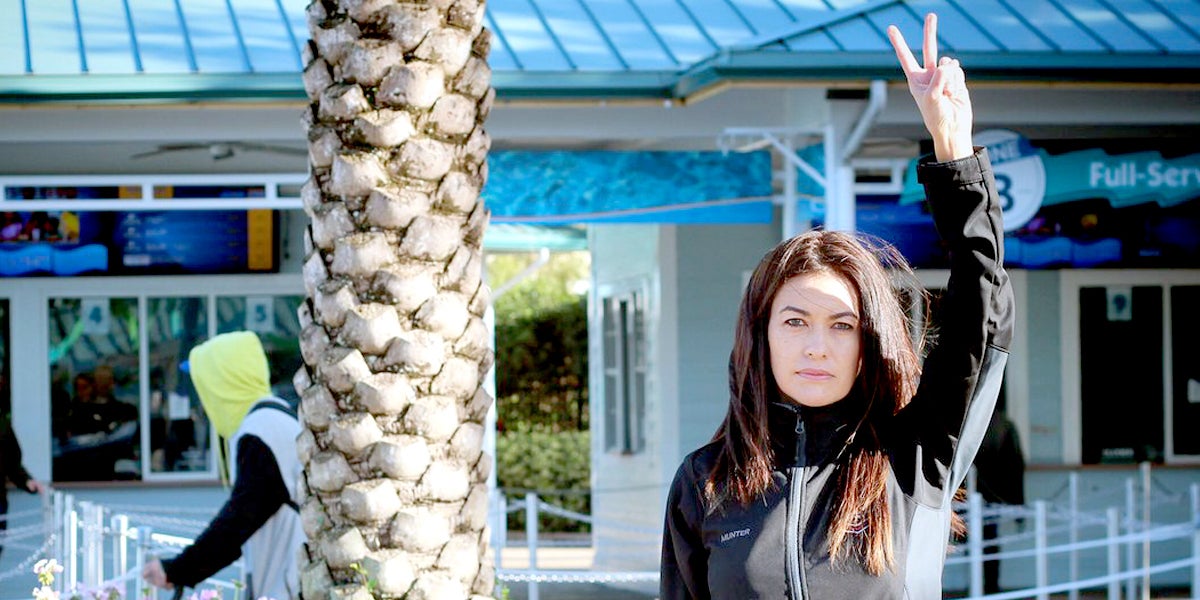 On the morning of Jan. 6, one of SeaWorld’s most well-known orcas, Tilikum, passed away surrounded by trainers, care staff and veterinarians at the Orlando, Florida ocean theme park where the famous killer whale lived most of his life.

Coincidentally on that same weekend, professional race car driver and environmental advocate Leilani Münter was in town to give a speech at a sustainability symposium. Tilikum’s death particularly struck a chord; the longtime animal rights activist once drove a Blackfish-themed race car at the Talladega Superspeedway in 2014 to raise awareness about cetaceans in captivity.

“Heartbroken” over the news and prompted by her chance proximity to the deceased whale, Münter drove to SeaWorld on the afternoon of Jan. 8 to pay her respects. She placed a sign and 33 roses—one for each year Tilikum spent in captivity—at the park entrance.

“May the four winds blow you safely to your ocean home where you’ve belonged all these 33 years,” the sign read. “RIP Tilikum.”

Münter’s gesture, which she filmed and posted on Facebook Live, resulted in a trespass warning from the Orange County Sheriff’s Office and an indefinite ban from not just the Orlando park but from all of SeaWorld Parks & Entertainment Properties, including Discovery Cove, Aquatica, Florida Festival, Places of Learning, Corporate Offices, Contact Center, Busch Gardens-Tampa and Adventure Island.

SeaWorld confirmed the incident to Speedway Digest. “The safety of our ambassadors and guests, and the welfare of our animals is always our top priority,” said Vice President of Public Relations Aimée Jeansonne Becka.

Münter is not too bothered by the ban, saying she’s “not a huge fan” of the park anyway. However, she told EcoWatch that it’s “ridiculous” that the company considered her a safety threat to park visitors.

“I wasn’t making a ruckus. It was just so harmless,” she said, noting that she did not shout at anyone or use a loudspeaker and did not resist detainment. She has also posted a full statement about the incident on social media.

The official complaint states, “Subject was mourning loss of orca on property w/roses and sign without permission.”

The 42-year-old racer is currently back home in Charlotte, North Carolina. When asked about her brush with SeaWorld security, she told EcoWatch that she wanted to pay respect to Tilikum’s life.

“He’s one of many orcas that has lived a miserable life in captivity but his story is somewhat exceptional,” describing how the 2013 documentary Blackfish was about Tilikum’s life and “the plight of captivity.”

“It’s wrong to pull these magnificent animals that are emotionally complex and live in tight-knit family groups from the wild. To force them to live this horrific life in this tiny pool doing tricks for food I think is just wrong,” she said.

Tilikum was brought to SeaWorld 25 years ago and died at the estimated age of 36. In March, SeaWorld announced the end of the orca breeding program, meaning the whales currently at SeaWorld will be the last generation of orcas under human care.

Münter will return to the Daytona International Speedway in the ARCA Racing Series season opener on Feb. 18 in the first-ever vegan-themed race car for Venturini Motorsports. Münter adopts an acre of rainforest for every race she’s in, a tradition she started back in 2007.

Check out the ride in the video here: