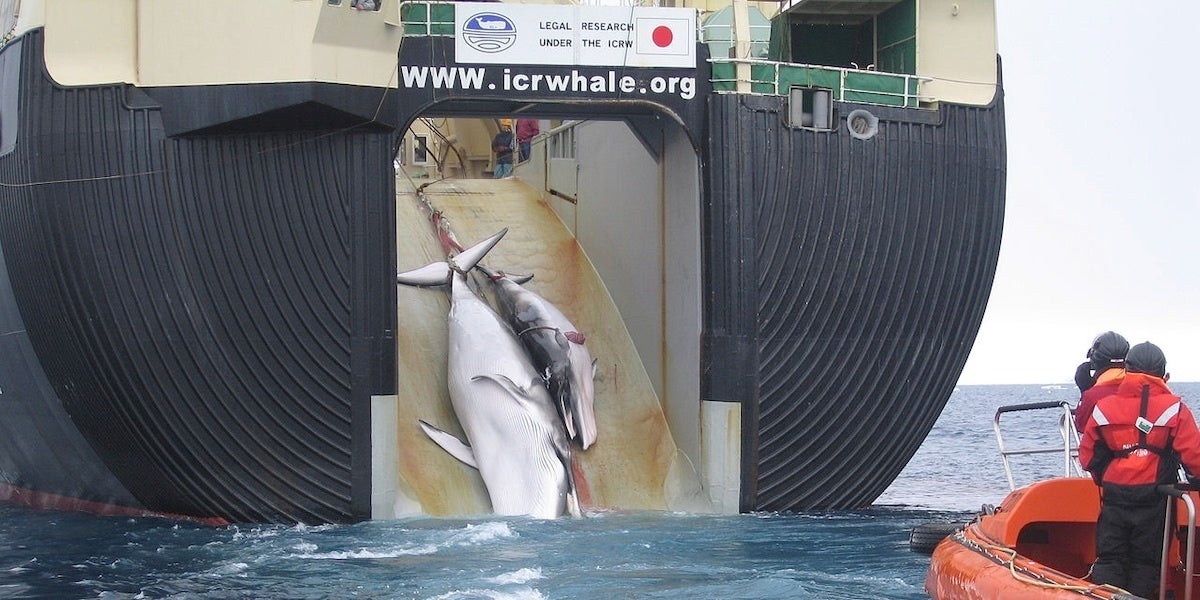 Despite a global ban on commercial
whaling more than 30 years ago, Japan has caught about 200-1,200 whales every year since 1987—including pregnant and juvenile ones—under the exception of “scientific research.” Opponents have fiercely criticized this research program as just a cover so the whales can be killed for human consumption.

Now, the national broadcaster
NHK reports that the Japanese government wants to fully resume commercial whaling by pulling out of the International Whaling Commission (IWC). Commercial whaling was paused in 1986 by the IWC because some whales were hunted to near extinction.

On Thursday the government said that the recovery of some whale stocks justified its withdrawal from the commission, according to NHK.

The government is said to be making preparations to restart commercial whaling in Japan’s nearby seas and exclusive economic zones.

Even though most of Japanese citizens no longer eat whale meat, whaling proponents say that eating the mammals is part of their culture.

In September, Japan attempted to lift the 1986 moratorium and pushed for “the sustainable use of whales.” Anti-whaling nations ultimately defeated the proposal.

“This is a grave mistake which is out of step with the rest of the world,” Sam Annesley, executive director at
Greenpeace Japan said in a press release. “We hope that Japan will reverse its decision and take its place beside the nations trying to undo the damage human activities have done to whale populations.”

The
BBC noted that despite the widespread reporting in Japanese media, there has not yet been an official announcement.

If Japan wants to leave the IWC next year, the commission will need to be notified by Jan. 1, according to
Kyodo News.

Humane Society International said that Japan’s move could motivate other pro-whaling nations to leave the IWC. The group also warns that the action defies Article 65 of the United Nations Convention on the Law of the Sea, which pushes for the conservation of marine mammals.

“If Japan leaves the International Whaling Commission and continues killing whales in the North Pacific it will be operating completely outside the bounds of international law,” Nicola Beynon, head of campaigns at Humane Society International in Australia, said in a press release. “This is the path of a pirate whaling nation, with a troubling disregard for international rule. We’re going to continue to press the international community to bring an end to the unjustified persecution of whales for commercial profit wherever it occurs.”

BREAKING: @kyodo_english is reporting that Japan will announce that it is leaving the International Whaling Commission but will continue hunting whales in its EEZ. HSI's whale conservation experts say this will usher in a new era of pirate whaling.https://t.co/5lT8x5I8sT