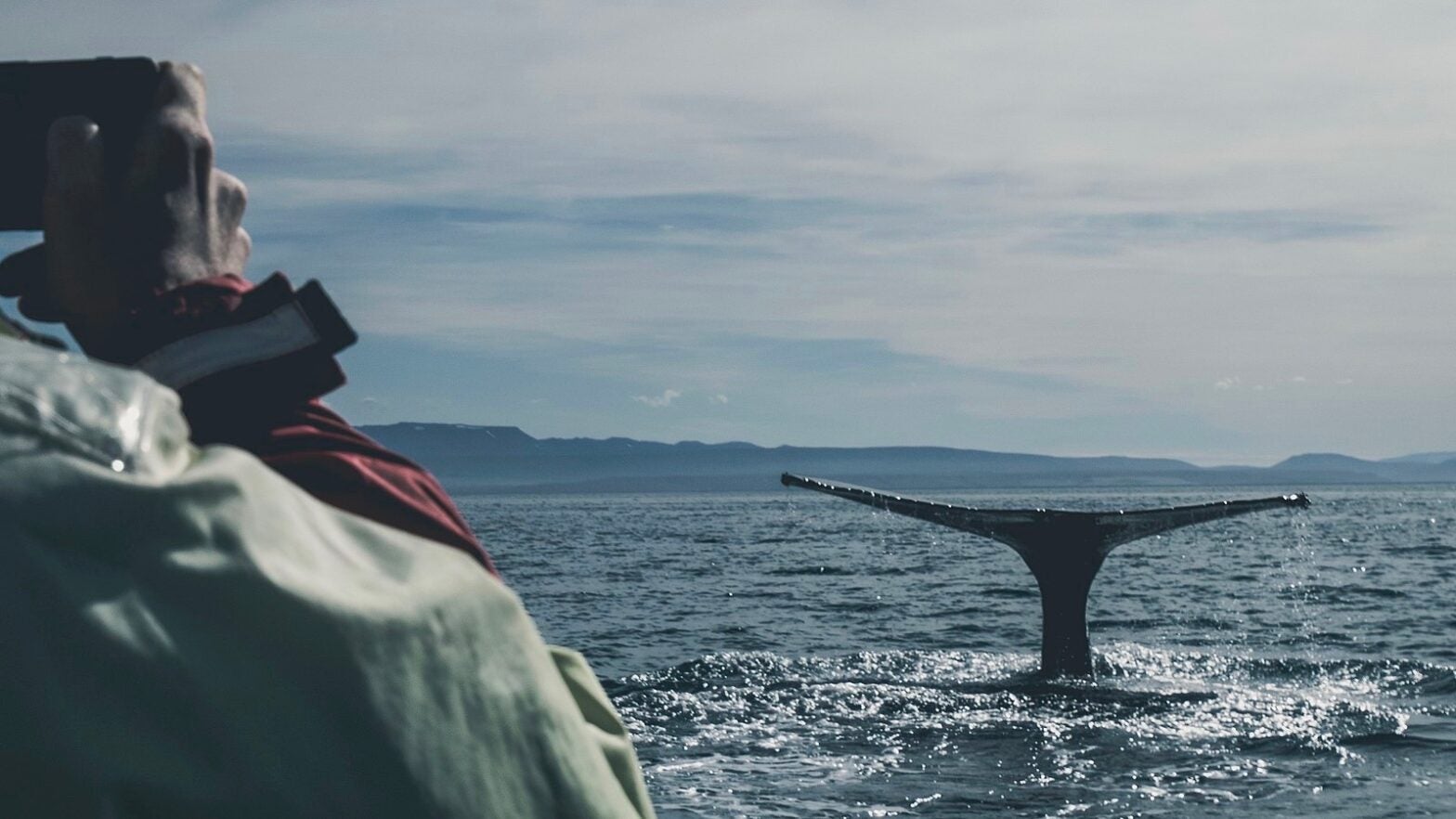 Whale watching (here, off Húsavík, Iceland) may be better for the local economy than whale hunting. Davide Cantelli / Wikimedia / CC BY

One of the most important global conservation events of the past year was something that didn’t happen. For the first time since 2002, Iceland — one of just three countries that still allow commercial whaling — didn’t hunt any whales, even though its government had approved whaling permits in early 2019.

Many people may think of whaling as a 19th-century industry in which men threw harpoons at their quarry by hand. But humans are still killing whales today in other ways. Thousands of whales are struck by ships, entangled in fishing lines, and harmed by ocean noise every year.

However, most nations support a commercial whaling ban that the International Whaling Commission, a global body charged with whale management, imposed in 1986 to prevent these creatures from being hunted to extinction. Iceland, Norway and Japan have long been exceptions to this international consensus.

I study marine ecology and conservation and spent the 2018-19 academic year on a Fulbright fellowship in Iceland. It is encouraging to see countries come to realize that whales are worth more alive than dead — for their spiritual value, their role in tourism, and the ecological services that they provide. As more Icelanders adopt this view, it will be good news for ocean conservation.

For years, ecological studies of whales focused on how much fish they ate or krill they consumed, which represented costs to fisheries. Starting around 10 years ago, my colleagues and I took a fresh look at whales’ ecological role in the ocean.

Whales often dive deep to feed, coming to the surface to breathe, rest, digest — and poop. Their nutrient-rich fecal plumes provide nitrogen, iron and phosphorous to algae at the surface, which increases productivity in areas where whales feed. More whales mean more plankton and more fish.

Whales also play a role in the carbon cycle. They are the largest creatures on Earth, and when they die their carcasses often sink to the deep sea. These events, known as whale falls, provide habitat for at least a hundred species that depend on the bones and nutrients. They also transfer carbon to the deep ocean, where it remains sequestered for hundreds of years.

Whales are economically valuable, but watching them brings in more money than killing them. “Humpbacks are one of the most commercially important marine species in Iceland,” a whale-watching guide told me one morning off the coast of Akureyri. Whale-watching income far outweighs the income from hunting fin and minke whales.

The end of Icelandic whaling?

For years after the international moratorium on whaling was adopted in 1986, only Norway allowed commercial whaling. Japan continued hunting in the Antarctic under the guise of “scientific whaling,” which many whale biologists considered unnecessary and egregious.

Iceland also allowed a research hunt in the 1980s, with much of the meat sold to Japan, but stopped whaling under international pressure in the 1990s. It resumed commercial hunting in 2002, with strong domestic support. Iceland was ruled by Norway and then Denmark until 1944. As a result, Icelanders often chafe under external pressure. Many saw foreign protests against whaling as a threat to their national identity, and local media coverage was distinctly pro-whaling.

This view started to shift around 2014, when European governments refused to allow the transport of whale meat harvested by Icelandic whalers through their ports, en route to commercial buyers in Japan. Many European countries opposed Icelandic whaling and were unwilling to facilitate this trade. Whalers no longer looked so invincible, and Icelandic media started covering both sides of the debate.

In May 2019, Hvalur — the whaling business owned by Kristján Loftsson, Iceland’s most vocal and controversial whaler — announced that it wouldn’t hunt fin whales, which are internationally classified as vulnerable, this year, citing a need for ship repairs and declining demand in Japan. In June, Gunnar Bergmann Jónsson, owner of a smaller outfit, announced that he wouldn’t go whaling either. These decisions meant that the hunt was off.

During my year in Iceland, I met for coffee every couple of weeks with Sigursteinn Másson, program leader for the local whale-watching association IceWhale and representative of the International Fund for Animal Welfare. At times he seemed animated about the prospect that no whaling permits would be allotted. At others, he looked gloomy because whalers and their allies in the Icelandic government had co-opted the conversation.

“I worked on gay rights in Iceland, which was opposed by the church, and mental health for ten years,” he told me. “They were peanuts compared to the whaling issue.”

At first, both companies insisted that they would start whaling again in 2020. But Jónsson’s outfit no longer plans to hunt minkes, and Másson doubts that whaling will continue. “Nobody is encouraging them anymore — or interested,” he told me last summer.

Now trade is getting even tougher. In 2018 Japan announced that it would leave the International Whaling Commission, stop its controversial Antarctic whaling program and focus on hunting whales in its coastal waters, reducing the demand for Icelandic whale meat.

Tourist behavior in Iceland is also changing. For years, tourists would go out whale watching, then order grilled minke in restaurants. After the International Fund for Animal Welfare started targeting whale watchers in 2011 with its “Meet Us Don’t Eat Us” campaign, the number of tourists who ate whale meat declined from 40 percent to 11 percent.

For many Icelanders, whale meat is an occasional delicacy. Over dinner a few months ago, I met an Icelandic woman who told me she thought whale was delicious, and she didn’t see why whaling was such a big deal. How many times had she eaten whale? Once a month, once a year? “I’ve had it twice in my life.”

About a third of Icelanders now oppose whaling. They tend to be younger urban residents. A third are neutral, and a third support whaling. Many in this last group may feel stronger about critiques of whaling than about hvalakjöt, or whale meat. Demand for hvalakjöt in grocery stores and restaurants has started to dry up.

Although few observers would have predicted it, whaling may end in Iceland not through denial of a permit but from lack of interest. How long until the world’s remaining commercial whalers in Japan and Norway, who face similar shifts in taste and demographics, follow a similar course?