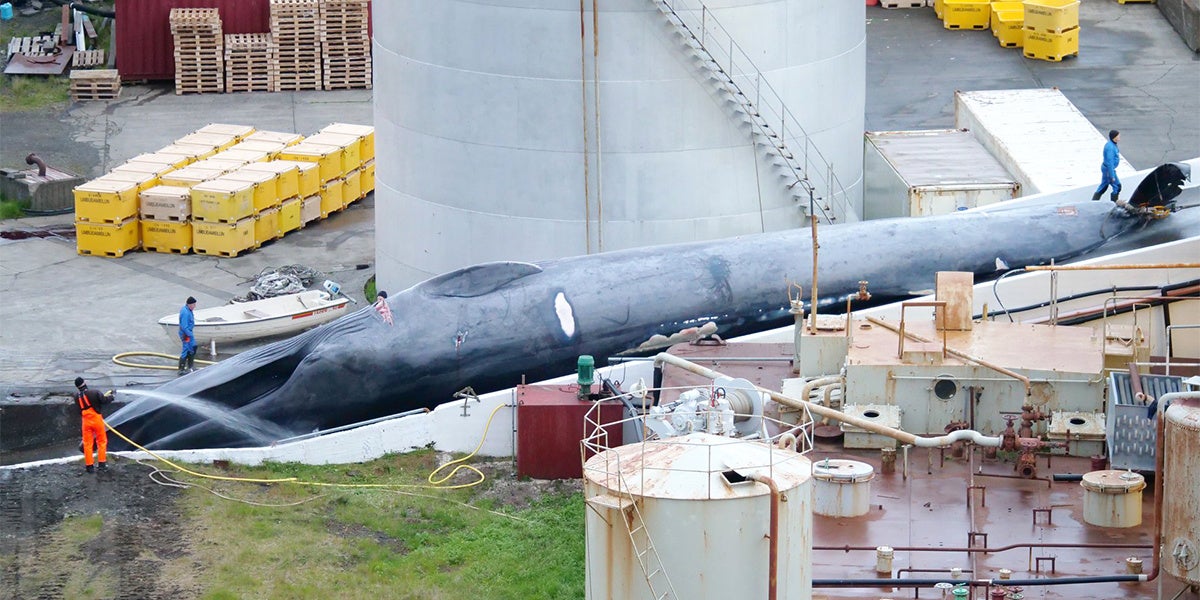 Update, July 20: Genetic testing by Iceland’s Marine Research Institute revealed the whale killed off the coast of Iceland that some experts thought was an endangered blue whale was actually a blue and fin whale hybrid, BBC News reported Friday. The findings corroborate the claims of the whaling company responsible for the kill. Blue and fin whale hybrids are still rare and it is illegal to trade their meat, researchers told BBC News.

Kristjan Loftsson, the CEO of the Hvalur hf whaling company that killed the whale, told ABC News Friday that it was in fact a hybrid of a blue and fin whale, which is not protected by the International Whaling Commission.

If the whale is a blue whale, it would be the first of its kind intentionally killed since 1978, according to BBC News.

“I know a blue whale when I see one and this whale slaughtered by Kristjan Loftsson is a blue whale,” Sea Shepherd Founder Paul Watson said in a statement reported by ABC News.

Some scientists agreed with Watson’s assessment.

“From the photos, it has all the characteristics of a blue whale,” U.S. National Oceanic and Atmospheric Administration (NOAA) Alaska Fisheries Science Center scientist Dr. Phillip Clapham said in a statement reported by BBC News.

“Given that, notably the coloration pattern, there is almost no possibility that an experienced observer would have misidentified it as anything else at sea,” Clapham said.

Arne Feuerhahn of Hard to Port, which posted the photos, said that most experts her group had consulted thought it was a blue whale, but some said it could be a hybrid.

This is also the view currently taken by Gisli Arnor Vikingsson from the Iceland Marine Institute.

“Photographs point to the fact that it’s a hybrid whale and we’re almost certain that it is one, but we can’t be sure until autumn when we get it DNA tested,” he told ABC News.

The whale’s species matters in part because it would determine whether Hvalur hf faces consequences for the kill.

While there is an international moratorium on whaling, Iceland does issue permits for the hunting and killing of fin whales, which it does not consider endangered species. It does, however, agree with the international prohibition against killing blue whales, which are one of the largest creatures on Earth and can grow to weigh up to 200 tonnes (approximately 220.46 U.S. tons) and stretch 30 meters (approximately 98.43 feet), according to BBC News.

“If this is a blue whale, it would be illegal and a breach and there could be fines and perhaps the company might lose their licence to hunt whales,” Feuerhahn told BBC News.

But while a hybrid catch would be better news for the whalers, it isn’t much better for hybrid whales, which Astrid Fuchs from the charity Whale and Dolphin Conservation told BBC News are also extremely rare.

Blue whales were decimated by 90 percent during the 20th century, according to ABC News.

Iceland and Norway are the only two countries who persist in open, commercial whaling, though Japan also slaughters whales for what it claims are scientific reasons, according to the International Fund for Animal Welfare.

Hvalur hf has killed 21 fin whales so far this season, according to Sea Shepherd.

Humane Society International’s Head of Campaigns Australia Nicola Beynon told ABC News she hoped the publicity around the recent kill would prompt the people of Iceland to turn away from the practice.

“It looks like a blue whale, but if not a blue whale then it’s a hybrid. They’re highly endangered animals,” she said.

“It is unforgivable. We hope that the Icelandic public give their whaling group a hard time about this. The cruel and inhumane practice of commercial whaling does not belong in the 21st century, it’s time to give it up,” Beynon said.